Predictions are difficult, a physicist once nearly said, especially about the future of politics. Be too loud and too confident in your wrongness one too many times and you’ll soon end up a laughing stock, as any Dan Hodges can tell you.

Nonetheless, I feel pretty sanguine as I make the following prediction: Nigel Farage will not be elected as the next mayor of London. In 2016, with Ukip’s influence seemingly at its all-time height, the capital’s mayoral election was won by a liberal Muslim human rights lawyer who has since become arguably the most popular politician in Britain. Ukip’s candidate, whose name I had to Google and have already forgotten, came fifth.

The city is really not natural territory for Farage and his cast of blazered redshirts. Modern London’s sense of identity is tied up with its liberal multiculturalism, and a significant chunk of Londoners, far from feeling that Something Must Be Done about immigration, are proud, tending smug, about the fact people from all over the world want to live here. It’s not a coincidence that it was the only English region to vote Remain in the 2016 Brexit referendum. And incumbent mayor Sadiq Khan owes his currently popularity more to how great a symbol he is for projecting these qualities than to anything he’s actually done.

So, no: if he stands, Farage will not win. 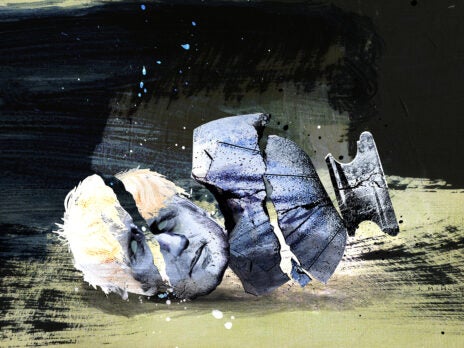 Thing is, though, he doesn’t have to. The friends of Farage anonymously discussing his putative bid in today’s Financial Times say his real goal would be to push the Tories into third place. (The supplementary vote system means that you need to come in the top two on the first round to have even a hope of winning: candidates ranked third or below are eliminated, and their votes redistributed by second preference.)

And this, he might just be able to do. None of the three candidates on the Tory shortlist are major figures: none of them has been elected to parliament, and the one MP who fancied the job this time round, Romford’s Andrew Rosindell, holds such fringe positions that even the 2018 Tory party didn’t let him near it.

What’s more, mayoral elections favour big personalities over party loyalty. This is how Ken Livingstone got elected as an independent in 2000, and probably goes some way to explaining why Greater Manchester mayor Andy Burnham put in by far the most impressive performance in the 2017 round of mayoral elections. All this will make things harder for whichever unknown Tory gets to run, and easier for Nigel Farage, who will have a massive advantage going into a contest simply by virtue of being well-known UK media figure Nigel Farage.

And there probably is a significant minority of Londoners out there who are rather more receptive to Ukip-style politics than the city as a whole likes to pretend. More than 1.5m Londoners voted Leave in the 2016 referendum – 40 per cent of the vote, and nearly 200,000 more than voted for Sadiq Khan. And for all inner London’s multiculturalism, there are suburban boroughs, especially on the capital’s eastern fringe, that are more favourable to hard right politics. If Staten Island can opt for Donald Trump, it’s not that crazy to imagine Havering voting Farage.

So modern Britain’s answer to PG Wodehouse’s would-be dictator Roderick Spode – Spode-u-like, let’s call him – may well put in a decent show. He’d surely do better than previous Ukip attempts to win the capital. The party has never even got close to ten per cent in the city’s mayoral contests: its best result came in 2004 when boxing promoter Kellie Maloney, back then still living as Frank, came fourth with 6.2 per cent. Its best-known policy for London featured in the party’s 2010 manifesto, when it pledged to turn the Circle Line back into a circle, but that didn’t seem to shift many votes.

However the election turns out, what a Farage mayoral run certainly would do is keep the tweed-soaked streak of piss on our televisions for the next two years, banging on about Brexit betrayal and scaring the Tories into running ever further to the right. That, one suspects, is his real goal. And this time, he can do it without adding to his increasingly embarrassing tally of failed parliamentary runs. (Word is, you can see all seven of the constituencies he failed to win in the past from the top of the London Eye. This is almost certainly nonsense, but it’s one of those lies that I feel contains a deeper form of truth.) He can do it, too, without being the poor sod lumbered with running Ukip. Again. Put like that, it’s hard to see why he wouldn’t run.