Who are you, Frida? How did you invent your physical identity, your persona, your charisma? What kind of lipstick and nail varnish did you use to make your self up?  I wonder if I want to literally know the answer to that question, or if it’s possible to answer it by exhibiting your orthopaedic corsets and prosthetic leg or your dresses and shawls and jewellery and medicines.

Frida, your personal possessions have been exported to London from the house you lived in most of your life, Casa Azul (the Blue House), which is now a museum in the Coyoacán area of Mexico City. Do they shine a light on how you constructed your multiple identities? 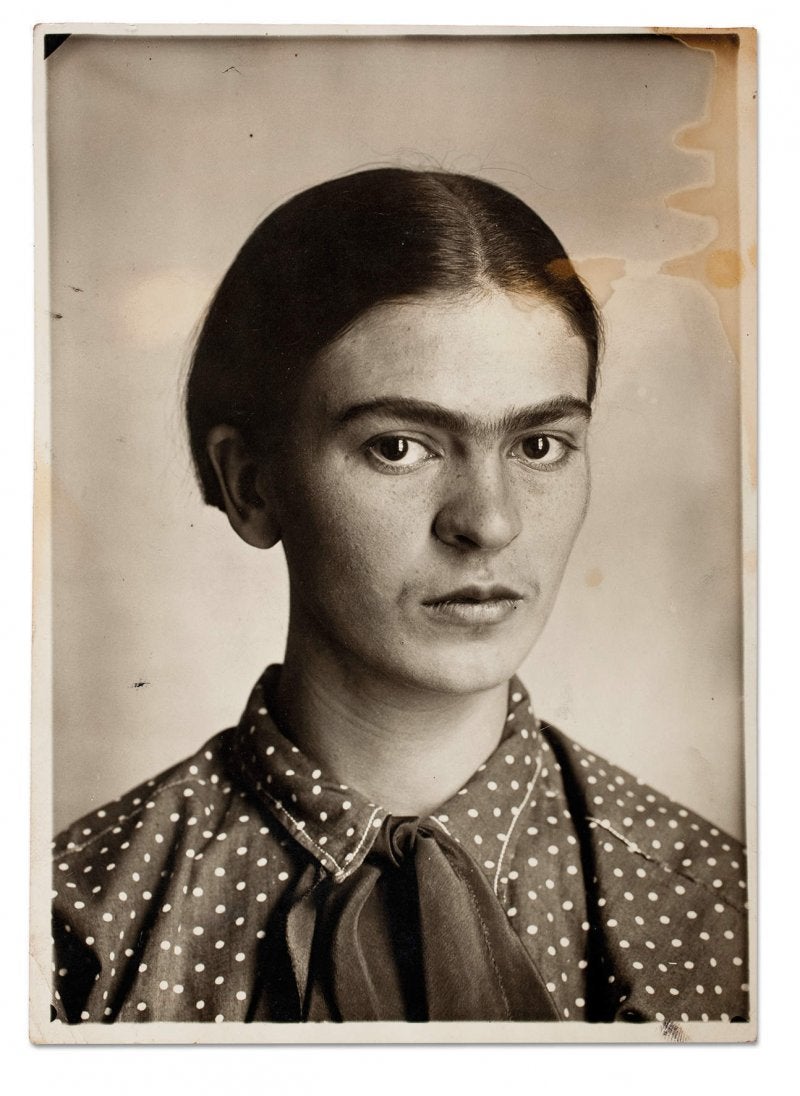 As one of the co-curators, Circe Henestrosa, writes:

Her resplendent Tehuana dresses; striking headpieces, hand-painted corsets and prosthetics masterfully masked her physical impairments, but were also a form of self-expression and an extension of her art.

Frida, I don’t think it’s necessary to unmask you. I understand that you were selective in what you chose to reveal and conceal in your art – in fact you described yourself as the Great Concealer. Obviously, there is more intimacy, anguish and mystery in your paintings than in your lipstick, but the curators have succeeded in making something intriguing and queasy in equal measure. They have made an anthropological exhibit of you. The show, “Frida Kahlo: Making Her Self Up” is a respectful, admiring and fascinating homage to your life, and though we don’t get to see enough of your art (the idea is that you yourself are a work of art), we are provided with plenty of cultural and historical context. I am much more informed about you now.

Your mother was Mexican mestiza, your father a German immigrant. Many of his serene black and white photographs of you posing for him as a child and teenager are included in this exhibition; also the iconic colour photographs (flowers in your hair, ornate jewellery, full make-up) taken by your lover Nickolas Muray, and the photographs of the great Gisèle Freund, the German-born French photographer and photojournalist, famous for her documentary portraits of almost every avant-garde writer and artist at work in the 20th century. Freund, who deserves a whole exhibition devoted to her work, arrived in Mexico, intending to stay for two weeks, but stayed for two years. Her portraits of you, Frida, often capture you in a relaxed and introspective mood.

I was excited to see the show because I am interested in the ways we all make ourselves up. Actually, it is one of my major preoccupations. And of course, I have always been curious about how you visually constructed your multiple identities and the politically charged ways you chose to dress – often in conversation with your mother’s family roots in the Tehuantepec Isthmus. And not least because you were beautiful, stylish, subversive, bohemian and glamorous. 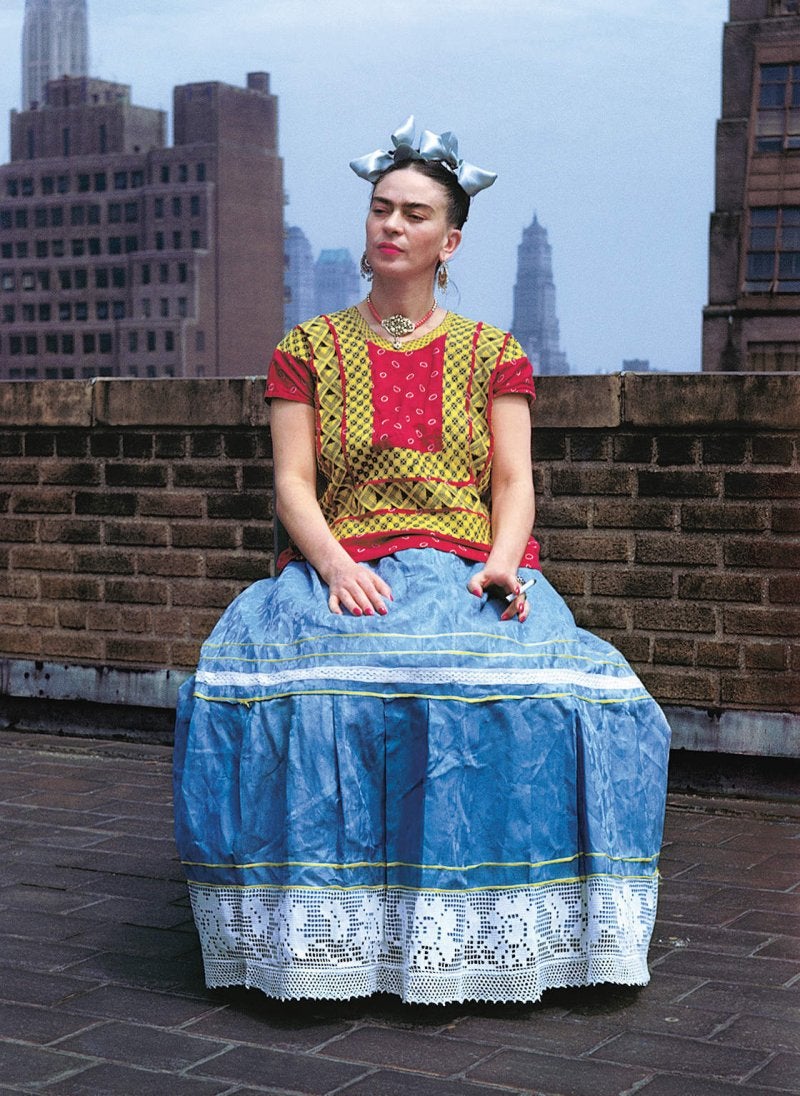 At the same time, I do not believe that you were really a performance artist. There is a confusion here about art and life. The suits and canes and rings of Oscar Wilde do not really spin more light on his plays and essays. All art is a kind of performance, but I know you will agree, Frida, that it is exhausting to hang around an artist, or anyone else for that matter, who is performing all the time. It is unsightly to need an audience more than it needs us. You were not performing all the time. It’s a slog to make art and requires our most ruthless attention.

I am pleased to have seen the actual Tehuana dresses, and the shawls and embroidered blouses you wore like a second skin. The odd thing, Frida, is that these historical garments look rather disembodied and unhappy without you in them – though in your paintings they are alive, present, and vibrant. Maybe it is because they are displayed on mannequins designed to vaguely resemble you. These multiple grey plaster Fridas, trapped in a glass case, are uncanny and distracting. To be honest, they reminded me of a scene in a zombie movie.

Perhaps, as Oriana Baddeley points out in her intellectually astute essay “Frida Redressed”, written for the excellent and lusciously produced book that accompanies the exhibition, these dresses, “disconnected from the reality of Mexico”, become “a ghost-like apparition, evoking instead a sense of alienation and loss”. Here, Baddeley is referring to the solo Tehuana dress set against a background of American skyscrapers in your 1933 work, My Dress Hangs There, which you painted when you were homesick for Mexico and living in the United States.

An orthopaedic corset decorated by Kahlo

OK, we now need to talk about your eyebrows. Your husband compared them to birds’ wings. You listed your own monobrow as one of the few things you liked about your face. I adore it too. You took your Revlon eyebrow pencil (I would not have known this if I had not seen it exhibited along with your nail varnish and lipstick) and with it, you exaggerated your monobrow to make it more fierce and dramatic. I am guessing that among many other things, this was a playful way of subverting submissive and neatly plucked representations of femininity.

Actually, I’m more interested in the fine sable paintbrush you used to etch your monobrow in Self-Portrait with Necklace (1933). This painting calmly explodes rigid gender stereotypes, because gazing at us, with immense authority (unlike the mannequins) is a young woman of luminous beauty (you) wearing a white lace blouse, her black hair plaited, her lips tinted red, with a faint moustache and a unibrow.  She is the author of her own desires, which is what André Breton, founder of the surrealist movement, might have unconsciously meant when he described your work as being like “a ribbon around a bomb”. I want to tell you that in 21st century Britain, both men and women have gone crazy for distinctive, thick eyebrows. In fact I have started to think there is one generic eyebrow now because they all look the same.

While we’re having this conversation, let’s smoke a cigarette. I have learned from this exhibition that you preferred to smoke Lucky Strikes, which were American, and that you carried around a portable gold ashtray, on to the lid of which a tiny cigarette with a glowing tip has been painted. Did you know that Freud’s nephew, Edward Bernays, a PR man who wrote copy for commercials, sold cigarettes to women by describing them as “torches of freedom”? Every time I smoke, Frida, I think of how we have been duped.

You should probably know that the reason this exhibition exists in the first place, is because your husband, Diego Rivera, locked all your personal possessions in the bathroom of the Blue House after you died, aged 47. In 2004 it was unlocked and your possessions have become part of art history. 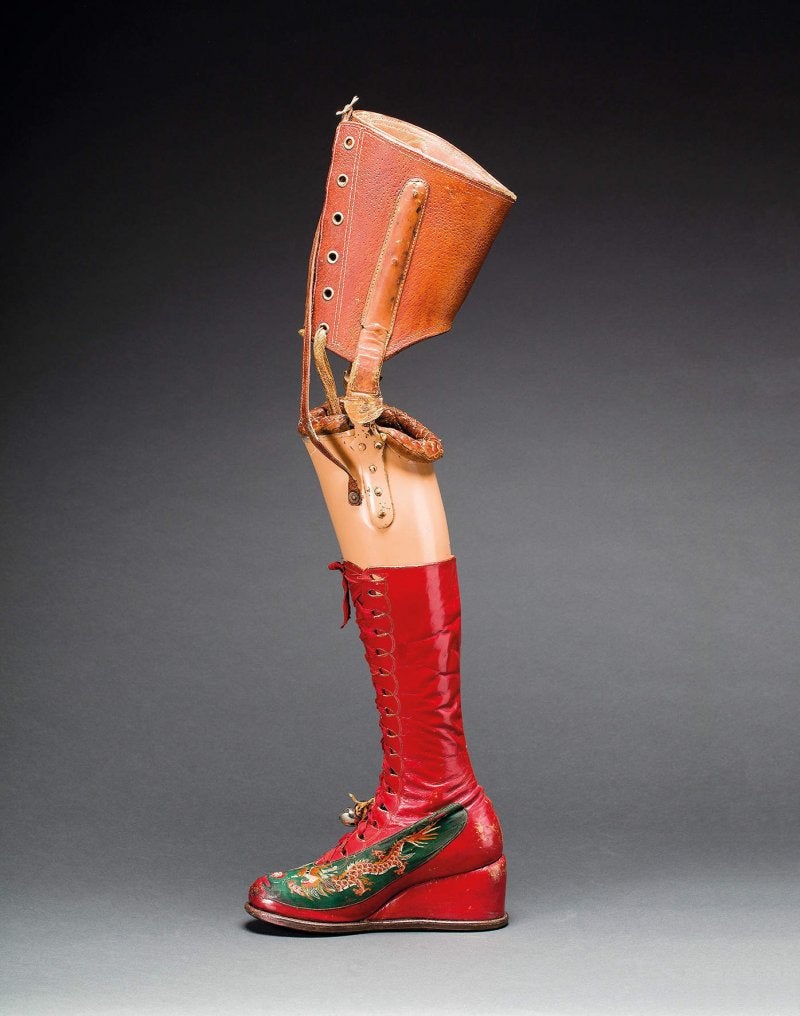 In 1953, a year before you died, your right leg had to be amputated. The prosthetic leg that you were obliged to wear, and which your long skirts artfully covered, takes on an almost religious, saintly aura when exhibited solo in a glass case that is shaped like a small four-poster bed – which in turn refers to your own bed in the Blue House. The red velvet shoes you decorated and adjusted to fit your feet are rock’n’roll.

The pain and suffering you endured after the terrible tram accident in 1925 that pierced a pole into your abdomen, is made literally evident by the orthopaedic corsets on display, made from leather and canvas. However, I have seen them before, in a number of your self-portraits. The Broken Column (1944) shows the two sides of your gouged body, held together by the circular ribs of these very corsets. It is conceptual and political as well as a highly emotional painting, showing as it does, a break in the alignment of a spine, a ruptured female body held together with the symmetry of the corsets. I believe the corsets as represented in your art to be the more important way of seeing them.

You had many surgical operations after the accident and when you were too frail to get to your easel, you decorated the plaster corsets that you were required to wear at the time. They resemble the breast plates of warriors, painted as they are with the hammer and sickle to display your communist politics, birds, the sun and moon and what seems to be a foetus.

Of all the exhibits, I thought these were the most astonishing art works. I have never seen anything like them before.

Frida, we do not know if you would have wanted any of these to be viewed as exhibits, which is why I am speaking directly to you in the first person, rather than at a lofty distance. You can’t speak back, but your art has already spoken. On balance, it seems to me that these objects are here, in the world, so why hide them away? I would recommend this exhibition to everyone.

I should just mention how much I enjoyed the film footage of Trotsky (you and he had a fling) standing with Diego Rivera in the garden of your home when he arrived in Mexico with his wife, Natalia Sedova, in 1937. You made him welcome after he was exiled from Russia by Stalin. In this film, Trotsky and your husband spend some time pointing to a tall phallic cactus. At one point, Rivera takes off his hat and beats it in the air, as if shooing away your libido, or perhaps it was just an insect.

Frida Kahlo: Making Her Self Up
V&A, London SW7, until 4 November

This article appears in the 27 Jun 2018 issue of the New Statesman, Germany, alone