“In 85 days, Marine will be President of the French Republic!” The 150-strong crowd cheered at the sound of the words. On stage, the speaker, the vice-president of the far-right Front National (FN), Florian Philippot, continued: “We will be told that it’s the apocalypse, by the same banks, media, politicians, who were telling the British that Brexit would be an immediate catastrophe.

“Well, they voted, and it’s not! The British are much better off than we are!” The applause grew louder and louder.

I was in the medieval city of Metz, in a municipal hall near the banks of the Moselle River, a tributary of the Rhine from which the region takes its name. The German border lies 49km east; Luxembourg City is less than an hour’s drive away. This is the “Country of the Three Borders”, equidistant from Strasbourg and Frankfurt, and French, German and French again after various wars. Yet for all that local history is deeply rooted in the wider European history, votes for the Front National rank among the highest nationally, and continue to rise at every poll.

In rural Moselle, “Marine”, as the Front National leader Marine Le Pen is known, has an envoy. In 2014, the well-spoken, elite-educated Philippot, 35, ran for mayor in Forbach, a former miner’s town near the border. He lost to the Socialist candidate but has visited regularly since. Enough for the locals to call him “Florian”.

I grew up in a small town, Saint-Avold, halfway between Metz and Forbach. When my grandfather was working in the then-prosperous coal mines, the Moselle region attracted many foreign workers. Many of my fellow schoolmates bore Italian and Polish surnames. But the last mine closed in 2004, and now, some of the immigrants’ grandchildren are voting for the National Front.

Returning, I can’t help but wonder: How did my generation, born with the Maastricht treaty, end up turning to the Eurosceptic, hard right FN?

“We’ve seen what the other political parties do – it’s always the same. We must try something else,” said Candice Bertrand, 23, She might not be part of the group asking Philippot for selfies, but she had voted FN at every election, and her family agreed. “My mum was a Communist, then voted for [Nicolas] Sarkozy, and now she votes FN. She’s come a long way.”  The way, it seemed, was political distrust.

Minutes earlier, Philippot had pleaded with the audience to talk to their relatives and neighbours. Bertrand had brought her girlfriend, Lola, whom she was trying to convince to vote FN.  Lola wouldn’t give her surname – her strongly left-wing family would “certainly not” like to know she was there. She herself had never voted.

This infuriated Bertrand. “Women have fought for the right to vote!” she declared. Daily chats with Bertrand and her family had warmed up Lola to voting Le Pen in the first round, although not yet in the second. “I’m scared of a major change,” she confided, looking lost. “It’s a bit too extreme.” Both were too young to remember 2002, when a presidential victory for the then-Front National leader Jean-Marie Le Pen, was only a few percentage points away.

Since then, under the leadership of his daughter, Marine, the FN has broken every record. But in this region, the FN’s success isn’t new. In 2002, when liberal France was shocked to see Le Pen reach the second round of the presidential election, the FN was already sailing in Moselle. Le Pen grabbed 23.7 per cent of the Moselle vote in the first round and 21.9 per cent in the second, compared to 16.9 per cent and 17.8 per cent nationally.

The far-right vote in Moselle remained higher than the national average before skyrocketing in 2012. By then, the younger, softer-looking Marine had taken over the party. In that year, the FN won an astonishing 24.7 per cent of the Moselle vote, and 17.8 per cent nationwide.

For some people of my generation, the FN has already provided opportunities. With his manicured beard and chic suit, Emilien Noé still looks like the Young Socialist he was between 16 and 18 years old. But looks can be deceiving. “I have been disgusted by the internal politics at the Socialist Party, the lack of respect for the low-ranked campaigners,” he told me. So instead, he stood as the FN’s youngest national candidate to become mayor in his village, Gosselming, in 2014. “I entered directly into action,” he said. (He lost). Now, at just 21, Noé is the FN’s youth coordinator for Eastern France. 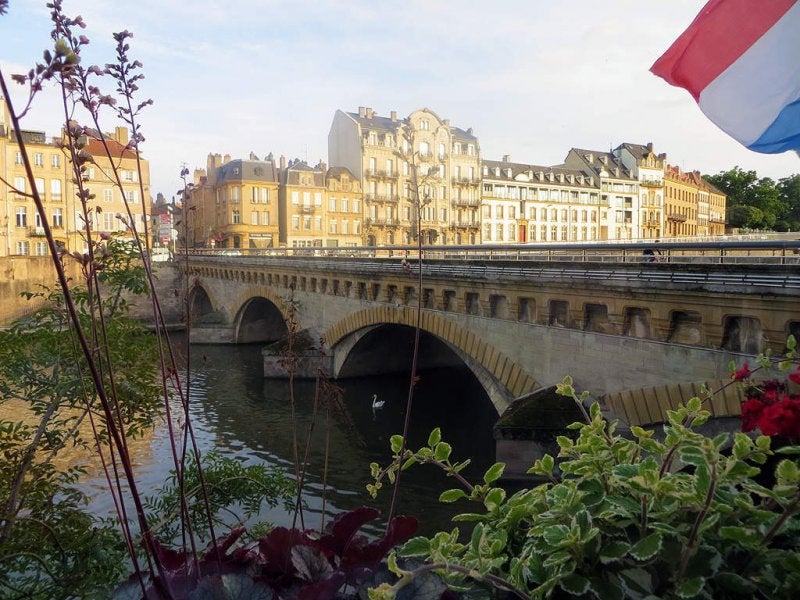 Next to him stood Kevin Pfeiffer, 27. He told me he used to believe in the Socialist ideal, too – in 2007, as a 17-year-old, he backed Ségolène Royal against Sarkozy. But he is now a FN local councillor and acts as the party’s general co-ordinator in the region. Both Noé and Pfeiffer radiated a quiet self-confidence, the sort that such swift rises induces. They shared a deep respect for the young-achiever-in-chief: Philippot. “We’re young and we know we can have perspectives in this party without being a graduate of l’ENA,” said another activist, Olivier Musci, 24. (The elite school Ecole Nationale d’Administration, or ENA, is considered something of a mandatory finishing school for politicians. It counts Francois Hollande and Jacques Chirac among its alumni. Ironically, Philippot is one, too.)

“Florian” likes to say that the FN scores the highest among the young. “Today’s youth have not grown up in a left-right divide”, he told me when I asked why. “The big topics, for them, were Maastricht, 9/11, the Chinese competition, and now Brexit. They have grown up in a political world structured around two poles: globalism versus patriotism.” Notably, half his speech was dedicated to ridiculing the FN’s most probably rival, the maverick centrist Emmanuel Macron. “It is a time of the nations. Macron is the opposite of that,” Philippot declared.

At the rally, the blue, red and white flame, the FN’s historic logo, was nowhere to be seen. Even the words “Front National” had deserted the posters, which were instead plastered with “in the name of the people” slogans beneath Marine’s name and large smile. But everyone wears a blue rose at the buttonhole. “It’s the synthesis between the left’s rose and the right’s blue colour”, Pfeiffer said. “The symbol of the impossible becoming possible.” So, neither left nor right? I ask, echoing Macron’s campaign appeal. “Or both left and right”, Pfeiffer answered with a grin.

This nationwide rebranding follows years of efforts to polish the party’s jackass image, forged by decades of xenophobic, racist and anti-Semitic declarations by Le Pen Sr. His daughter evicted him from the party in 2015.

Still, Le Pen’s main pledges revolve around the same issue her father obsessed over – immigration. The resources spent on “dealing with migrants” will, Le Pen promises, be redirected to address the concerns of “the French people”. Unemployment, which has been hovering at 10 per cent for years, is very much one of them. Moselle’s damaged job market is a booster for the FN – between 10 and 12 per cent of young people are unemployed.

Yet the two phenomena cannot always rationally be linked. The female FN supporters I met candidly admitted they drove from France to Luxembourg every day for work and, like many locals, often went shopping in Germany. Yet they hoped to see the candidate of “Frexit” enter the Elysee palace in May. “We’ve never had problems to work in Luxembourg. Why would that change?” asked Bertrand. (Le Pen’s “144 campaign pledges” promise frontier workers “special measures” to cross the border once out of the Schengen area, which sounds very much like the concept of the Schengen area itself.)

Grégoire Laloux, 21, studied history at the University of Metz. He didn’t believe in the European Union. “Countries have their own interests. There are people, but no European people,” he said. “Marine is different because she defends patriotism, sovereignty, French greatness and French history.” He compared Le Pen to Richelieu, the cardinal who made Louis XIV’s absolute monarchy possible:  “She, too, wants to build a modern state.” French populists are quick to link the country’s current problems to immigration, and these FN supporters were no exception. “With 7m poor and unemployed, we can’t accept all the world’s misery,” Olivier Musci, 24, a grandchild of Polish and Italian immigrants, told me. “Those we welcome must serve the country and be proud to be here.”

Lola echoed this call for more assimilation. “At our shopping centre, everyone speaks Arabic now,” she said. “People have spat on us, thrown pebbles at us because we’re lesbians. But I’m in my country and I have the right to do what I want.” When I asked if the people who attacked them were migrants, she was not so sure. “Let’s say, they weren’t white.”

Trump promised to “Make America Great Again”. To where would Le Pen’s France return? Would it be sovereign again? White again? French again? Ruled by absolutism again? She has blurred enough lines to seduce voters her father never could – the young, the gay, the left-wingers. At the end of his speech, under the rebranded banners, Philippot invited the audience to sing La Marseillaise with him. And in one voice they did: “To arms citizens! Form your battalions! March, march, let impure blood, water our furrows…” The song is the same as the one I knew growing up. But it seemed to me, this time, a more sinister tune.