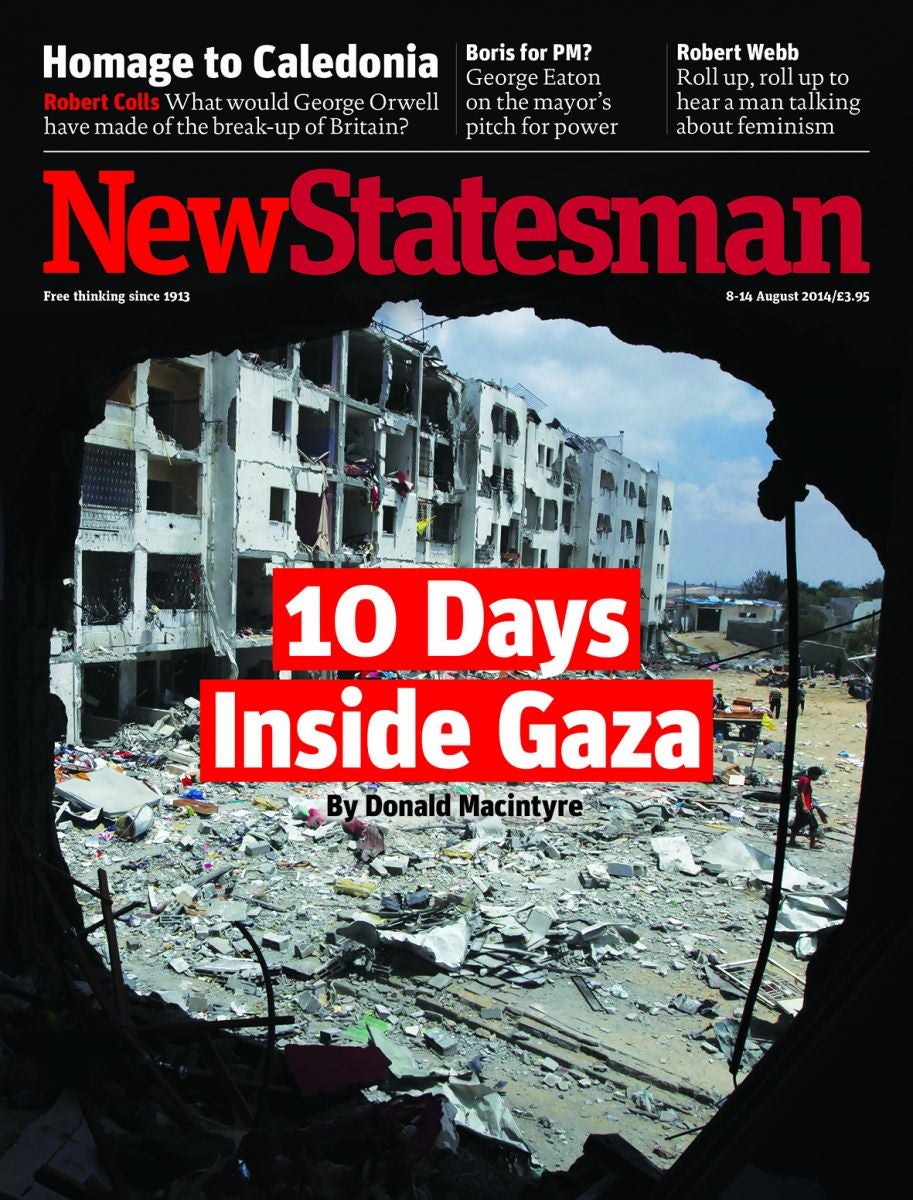 COVER STORY: LIFE AMONG THE RUINS by DONALD MACINTYRE, WRITING FROM GAZA

​GEORGE EATON: AS BORIS HEADS FOR WESTMINSTER, THE TRUCE BETWEEN LABOUR’S MAYORAL RIVALS IS ABOUT TO END

THE NS ESSAY: HERE’S WHAT GEORGE ORWELL WOULD HAVE MADE OF THE BREAK-UP OF BRITAIN

ROBERT WEBB: WHAT IS A MALE FEMINIST SUPPOSED TO DO?

JASON COWLEY: THE QUESTION OF EMPATHY AND REPORTING THE WAR

LAURIE PENNY: ON CENSORSHIP FROM THE FIRST WORLD WAR TO THE PRESENT

MEHDI HASAN: THE ARAB WORLD HAS ABANDONED THE PALESTINIANS

THE POLITICS COLUMN: AS BORIS HEADS FOR WESTMINSTER, THE TRUCE BETWEEN LABOUR’S MAYORAL RIVALS IN LONDON IS ABOUT TO END

After Boris Johnson’s announcement that he will seek election as an MP in the 2015 general election, the NS political editor, George Eaton, considers the hopefuls likely to compete for the Labour ticket in the next mayoral race:

There is officially only one declared candidate – the transport buff Christian Wolmar – but Tessa Jowell, Sadiq Khan and David Lammy are regarded as certain to stand, with Diane Abbott, Andrew Adonis and Margaret Hodge also considering it.

Lammy, who turned down a shadow ministerial post in 2010, may launch his campaign at the party’s conference next month. Eaton notes:

Not everyone is impressed, however. “Labour members in London will find it difficult to forgive time, effort and money being spent on mayoral campaigns rather than in the target seats we need to win in London,” a party source told me.

This decision to jump the gun and gain momentum may be a response to the other candidates, including the front-runner – Tessa Jowell, the former culture secretary, who is widely admired for her stewardship of the London Olympics bid:

If Jowell’s past is a virtue, it is also a liability. She voted for and continues to defend policies such as the Iraq war, top-up fees and 90-day detention and her association with Tony Blair is regarded by party figures as “toxic”. Among a Labour “selectorate” that lies to the left of the national party, all of this will count against her. Jowell would also face personal scrutiny over her husband, David Mills, who was prosecuted in Italy in 2006 for allegedly accepting a bribe from Silvio Berlusconi, and with whom she reunited after six years apart.

A third candidate is the MP for Tooting, Sadiq Khan, who spent the night of Labour’s local elections triumph in May running from count to count in London congratulating new incumbents, building the kind of network needed to run a mayoral campaign. Among his existing supporters he can count Doreen Lawrence (the mother of Stephen Lawrence), who was recently made a Labour peer:

The pair first met through anti-racism campaigns and sat together on a Home Office committee on stop-and-search during [Khan’s] time as a human rights lawyer. Lawrence would be a natural choice for the post of deputy mayor for equality, a new role recently proposed by Khan.

There is also a possible “Livingstone-style insurgent” in Diane Abbott – but one Labour MP asks about her, “Can she run anything?” On the side of the Conservatives, the picture is less clear:

Sebastian Coe, Karren Brady and Zac Goldsmith are most frequently cited as potential candidates. Yet to varying degrees all three have already ruled themselves out. In the absence of a political superstar in the model of Johnson (who remains by far the country’s most popular politician), the party may be forced to settle for a second-tier candidate such as the deputy mayor Kit Malthouse or the London Assembly member James Cleverly.

COVER STORY: DONALD MACINTYRE’S DETAILED REPORT FROM GAZA ON A BLOODY WAR THAT CAN’T BE WON

In this week’s New Statesman cover story, Donald Macintyre reports from Gaza, giving context and insight to the stream of grotesque statistics emerging from the Middle East since 8 July.

From the destruction of the Strip’s unoccupied 15th-century Mahkamah Mosque, a cherished symbol of Gazan civilisation, to the bombing of privately owned factories making everything from ice cream to cardboard boxes, “Operation Protective Edge” has caused social and economic havoc.

In our long read, Macintyre visits the Preparatory A Boys’ School in Rafah, run by the UN Relief and Works Agency (Unrwa), an hour after it was struck by the Israel Defence Forces. He writes:

You could see pools of blood outside the gate where a narrow hole in the paving suggested that a drone had been fired, possibly at a militant on a motorbike. Certainly a passing motorcyclist was one of at least seven killed in the attack, described as “criminal” by Ban Ki-moon, the UN secretary general. But most of the dead had been among the 3,000 refugees taking shelter in the school.

What made the attack all the more astonishing was that it came less than a week after at least 15 had been killed in artillery shelling at the Jabalya Girls’ A&B Elementary School, a refuge for another 3,000 women, children and men. On the drive up to the school bystanders were staring anxiously up at the sky as at least one drone hovered noisily overhead and shelling continued to rumble in the distance. Outside the school gate were the corpses of dead donkeys felled by shrapnel from one of three shells.

The IDF said it was responding after being fired at “from the direction” of the school. Because artillery shells are not precisely accurate, they are often fired in rounds. But because of the destruction they cause, normal battlefield procedure requires targets to be at least 250 metres from the army’s own troops. Unless it was just an error, a lesser margin must have been applied to the Palestinians who, as the UN had told the IDF 17 times, were sheltering in the school.

One notable difference from the 2008-2009 offensive on Gaza, known as Operation Cast Lead, is the much larger number of families (36 so far, according to the Israeli human rights group B’Tselem) killed in homes with civilian residents still inside. Ultimately, Macintyre writes, it is the idea of Palestinian tunnels reaching into Israel – the Israelis did not announce the destruction of these was an objective until after the campaign began – that most effectively galvanises support inside Israel. It is an idea that “strike[s] at something deep in the Israeli psyche”.

Then there is the cost to Israel: in the lives of soldiers lost, many of them young conscripts killed at what should have been the start of their adult lives, and financially in billions of dollars. For the final difference from the 2008-2009 Gaza war, in which up to 1,400 Palestinians were killed, is that Hamas has fought back effectively. It is not simply that the death toll among soldiers is much higher than it was in Cast Lead, but that even with Israel’s formidable US-funded Iron Dome anti-missile capability, the longer range of Hamas rockets has enabled the Palestinians to strike fear among Israeli civilians and send them repeatedly hurrying into shelters across a much longer stretch of the country than they did three years ago. A paradox of the war is that, from a position of political weakness and isolation, its relations with Iran frayed over its opposition to President Bashar al-Assad of Syria, and with a new Egyptian president as hostile to the Islamist faction as Israel, Hamas has stamped itself as a regional force to be reckoned with.

HOMAGE TO CALEDONIA: ROBERT COLLS ON WHAT GEORGE ORWELL WOULD THINK OF THE BREAK-UP OF BRITAIN

Robert Colls offers a canny assessment of George Orwell and unionism in an essay that takes on literature, history and identity politics. Orwell lived intermittently on the Hebridean island of Jura from 1946 to 1949 and loved it – and yet if he belonged to anywhere, it was to London, and he would have rightly seen this September’s referendum on independence as being as much about that city as Scotland:

In The Road to Wigan Pier he noted how English regional identity was in fact a series of intemperate reactions to an overbearing capital, and his wartime essay “The English People” found clearly in favour of more autonomy for Scotland and Wales and more intelligent regionalism for England.

Colls quotes Orwell’s statement “By revolution we become more ourselves, not less” – and notes the SNP’s reluctance to make the referendum about nationalism but preference for focusing on the virtues of smaller, better government. “Orwell would have approved,” he writes.

After a poor start the Scots did well by union – at least as well as the Welsh and the English. London was always the senior partner, of course, but the original terms were so clear they had to be changed and the Anglo-Scottish relationship was not colonial, because the Scottish people were never, in Tariq Ali’s ridiculously numbing phrase, a “subaltern layer”. Can subalterns speak?

Scottish elites forged empires and made fortunes. The Scottish middle class voted solidly unionist from their solidly granite suburbs. Scottish workers helped build a labour movement that one day would lay claim to Union itself. Out of the last great British political settlement (1880-1920) stemmed the identities that Orwell knew so well; identities that are now in disrepair.

As Scots go to the polls on 18 September, we have to conclude that the referendum is about not just Scotland, but all these islands. Is the SNP part of a new settlement, or is it a throwback to the old? Is it still the case that what is good for England is also good for Scotland, or is it the other way round? Would Scottish independence help the English? Which English? Whatever the answer, a Yes vote would be followed by years of savage negotiation as the new state tries to cut itself from the old over the closure of nuclear bases, over the future of Scottish defence contracts, over debts and assets and taxes, over the SNP’s soft line on immigration (58 per cent of Scots against), over British institutions such as the BBC and the NHS and European ones such as Nato and the EU and, last but not least, over the prospect of the next general election returning a Labour government dependent on Scottish MPs, halfway through Scotland removing itself from the electoral calculation. There will be no shortage of rogues in these discussions. Pity the poor Scots.

Pity the poor English, too. There once was a Labour MP (PPE, Oxford and the Treasury, followed by various metropolitan good-cause/career vantage points) who thought she was making a speech about a village in her own northern constituency but in fact was making a speech about a village of the same name somewhere else. After nine years representing the one, she didn’t know it from the other. Still stuck with a metropolitan political class that sees the rest of the country as fodder for its own ambition; still stuck with a global capital that controls the flow of all resources and information; still stuck with a sort of scuzzy journalism that likes to come up from London for the day to reflect on the death of half the country, the half that frightens it – we should pity the poor rest of the English. Foolish enough to believe that England belongs to them, too, they feel they are being cut out of the picture.

Also in this week’s issue: