Last night was the UK debut of HBO’s new comedy Silicon Valley on Sky Atlantic. It’s about an underwhelming programmer who stumbles on a powerful data compression algorithm while working on a (terrible) music comparison website, and finding himself in the middle of a bidding war between two fictional Valley giants from Google-like companies over a stake in his product. It’s funny, but the jokes can be a little inside baseball sometimes – marketing executives having a meeting on one of those stupid massive bike buses, for example, or a throwaway line about a self-made billionaire who’s “working on building an island in the Pacific”.

That character, Peter Gregory, is very obviously a caricature of Peter Thiel, who co-founded PayPal and big data analysis company Palantir. He’s worth something in the region of $2.2 billion according to Forbes, and, like his fellow PayPal founder Elon Musk, is fond of outrageous reach-for-the-stars bets on future tech. Musk’s pet obsessions are electric cars and space travel; Thiel’s are philanthropy and seasteading. That is, the literal creation of new nation states on the sea.

He’s donated more than $500,000 to the Seasteading Institute, a private company which seeks to build a floating city off the California coast so that “the next generation of pioneers [can] peacefully test new ideas for government”. Silicon Valley’s hyperactive obsession with “disruption” extends not just to existing markets, but to the very state itself – the Seasteading Institute’s rhetoric, which reads like this:

How the super-rich live

Don’t listen to the climate doomists

Seasteaders believe that governments shouldn’t be like the cell phone carrier companies, with few choices and high customer-lock-in. Instead, we envision a vibrant startup sector for governments, with many small groups testing out innovative ideas as they compete to better serve their citizens’ needs.”

…are entirely indicative of a common political mood in Silicon Valley. Governments by definition get in the way of innovation, and if innovation is the moral absolute then governments must be evaded. In international waters companies can do whatever they want, and experiment however they want. Moor such a ship just over the line marking international waters, off the coast of San Francisco, and high-speed boats could ferry commuters back and forth every day just as if going to any other job.

Readers familiar with Ayn Rand’s Atlas Shrugged will be familiar with the idea that society’s best and brightest should voluntarily withdraw their labour and ideas from society, out of rational self-interest – it’s an attitude which, in our world, manifests as controversy over the Uber taxi app and whether it should be subjected to the same regulations as regular taxis. It also manifests in proposals to cut California up into six new, smaller states. 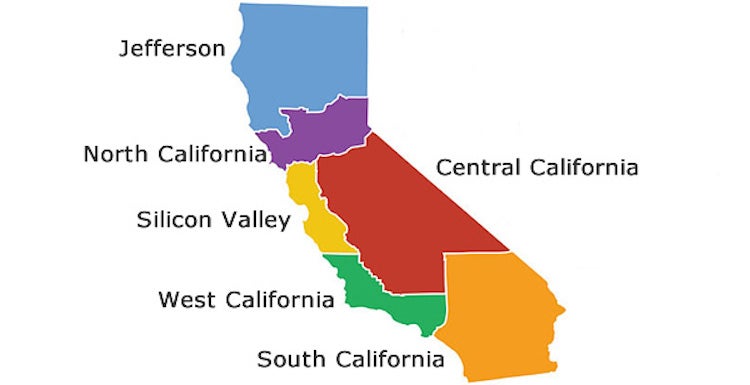 Why is this happening? Because a man called Timothy Draper wants it, and has actually managed to gather enough signatures – at least 800,000 – in support of the idea to force a statewide ballot initiative on it in 2016.

Draper is a venture capitalist who became more widely known outside of Silicon Valley circles last month, when it emerged he was the winner of the secret auction of 30,000 bitcoins seized from the black market Silk Road website in October last year. (The amount he paid was undisclosed.) He’s launched a campaign, Six Californias, to push his fantasy.

There are some reasons why splitting California up might make sense. It’s the third-largest state by area and the biggest overall by population – slightly larger than Norway with a population as large as Poland’s – and this seems to create something of a democratic deficit, relative to the rest of the US. The same area on the East Coast is taken up by six smaller states, each with their own state governor and legislature, and as such Draper feels that California’s government is inherently unable to respond to the needs of all of its constituents. It’s pitched as a chance to “have a say in what your state becomes”, as you “create your state from the ground up”. What could be more disruptive than the chance to completely destroy the existing governmental structure and replace it with a lean startup, small and rapid in response to 21st century needs?

Yet the regions picked out as being suitable for new statehood give the game away as one of self-interest on the part of Silicon Valley. Jefferson, in the north of the state, has had a small but vocal secessionist movement for years, as it’s a mostly-rural area with a very different culture and feel to the rest of the state – but the main benficiary of this plan would be the wealthier parts of the state, like Silicon Valley, as they would no longer have to subsidise poorer regions with tax revenue. South California, which would contain the wealthy exclave of Orange County as well as the city of San Diego, would also likely be attracted to the idea. If you can’t build on the sea, then take control of your own piece of land.

The initiative would also create a political problem for the Democratic Party, which can count on California to consistently return its candidates as the winner in presidential and Senate elections. Each state gets two senators, and while North and West Californias (centred around San Francisco and Los Angeles respectively) vote reliably Democrat, the other four states are likely to return mostly, or even all, Republican senators. It would also split California’s 55 Democratic electoral votes up, further helping the Republicans on the national stage. It’s unlikely that this isn’t part of the motive for pro-business, anti-government Draper.

For these reasons, it’s likely to be vetoed at the level of either the state legislature or Congress, and without assent from those bodies the cause is most likely a Quixotic one. Central California would, according to the Legislative Analyst’s Office, be the poorest state in the entire US, while Silicon Valley would be its richest – and as a result, it is no surprise that a poll in February found 59 per cent of Californians were opposed to the idea. As much as Silicon Valley’s most ambitious entrepreneurs may wish they could slough off the dead skin of government, there’s a reason it exists. Not every innovation is a fair one, and not every child gets its ice cream.