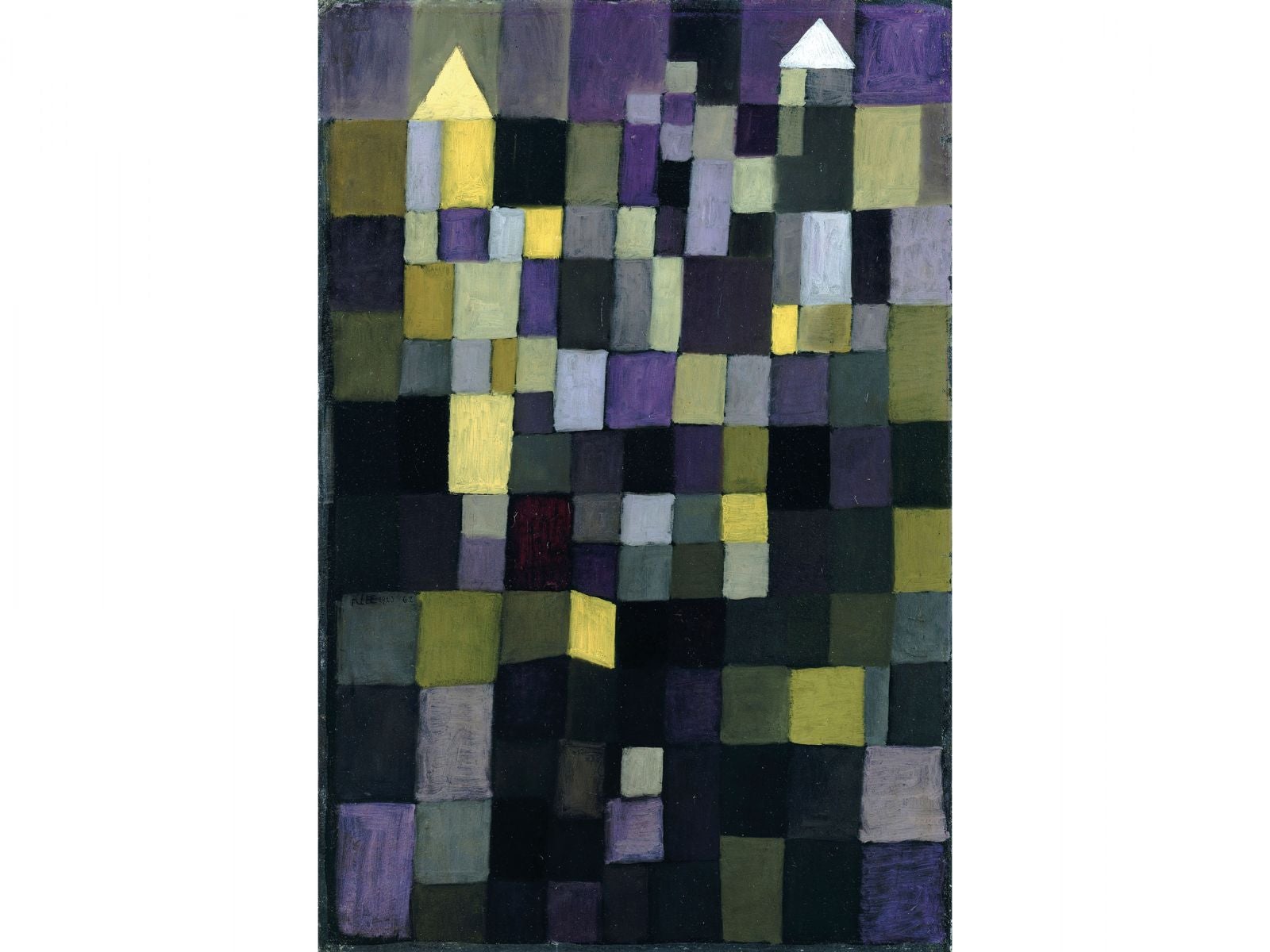 Now consider the building set – Bauspiel – that my wife bought 30 years ago in Berlin from the Bauhaus-Archiv. With its tiny components you can build a ship with two sails, a bridge, a creature, an arch. Each individual machined unit is deliciously slim, with sharp, elegant edges. And the colours are clean reds and whites, with sometimes surprising shades – a Colman’s mustard triangle, a light sage rectangle, each an escape from the clichéd range of children’s colours. The smallness is crucial.

In the autumn of 1929, Will Grohmann’s monograph on Klee appeared. Klee was 49. He said of an advertisement: “The name is in such big letters that I had a terrible shock.” His own signature is an exact exoskeleton of India ink, a carefully placed minuscule insect of crisp calligraphy. Of the 100 Klee pictures on show at Tate Modern, many are miniatures and none approaches those Rubens the size of snooker tables. The late pictures are bigger and weaker, the result of his scleroderma, a complication of measles that shrank and tightened his skin and that eventually killed him, having first deprived him of his pictorial nimbleness.

The building blocks suggest that Bauhaus constructivism was inspirational for Klee, who taught there from 1921 to 1931. In fact, he had already made his liberating discovery – in Tunis, in 1914, with the great painter August Macke and Louis Moilliet. (It is one of the disappointments of this exhibition that there are no examples from this crucial two weeks in which Klee discovered colour in blocks and declared himself a painter.)

He was hired by Walter Gropius because Gropius could see in Klee the accommodation of the visible organic world to the architectural abstract: “When we look around us today, we see all sorts of exact forms,” Klee wrote, “whether we like it or not, our eyes gobble squares, circles, and all manner of fabricated forms.” You certainly do after seeing this exhibition: the bridge across the Thames is pure Klee, a magic carpet of metal segments, speeding to vanishing point. (It should be no surprise that he painted a circular homage to Picasso and Cubism in 1914.)

In Klee, function meets fantasy. We learn from the Tate’s unusually helpful and interesting catalogue that when Klee was 50, his birthday celebrations included hiring a Junkers aeroplane to fly over his house and parachute down presents from students and colleagues – somehow an appropriate conflation of technology and whimsy, of magic and machinery.

As a teacher, Klee was popular with his students. He delivered his first lecture with his back to his audience while he drew with both hands on the blackboard: shyness not showmanship. (He drew and painted with his left hand, wrote with his right.) He could be an indefatigably finicky theoretician and students are flattered by the intellectual challenge of difficulty.

Bridget Riley, in her admiring preface to the 2002 Klee show at the Hayward Gallery in London, was unable to discover any coherence in Klee’s writings, as opposed to the paintings. I sympathise. Actually, Klee is clear enough in his main thrust: it is not the task of the artist to be “an improved camera”, accurately reproducing the visible world. The sign is more important than mimesis.

On the other hand, his attempts to explain simple fundamentals can be inspissated: “The optic-physical phenomenon produces feelings which can transform outward impressions into functional penetration more or less elaborately, according to their direction.” When I read this, I thought of Dr Johnson’s definition of “net” in his dictionary: “Anything made with interstitial vacuities.” Better to stick with “net”. Or say that pictures produce feelings. As a pedagogue, Klee was popular but chafed by his working conditions. There is a painting called Ghost of a Genius (1922), which looks like the selfportrait – a depleted soul with dead blue eyes who’d rather be painting than teaching.

Those building blocks – fundamental to Klee’s art – are saturated in colour both burnished and bright, richly harmonic. They are singular, sufficient unto themselves but they imply plurality and pattern – just as bricks join to build a wall.

The grid, the wall, is at the heart of Klee’s painting and drawing. Yet the pattern made by the units is always disrupted, bespoke, un-uniform. The variants are a matter of intuition, touch, genius. Theory, Klee wrote, “is fine but it has its limits: intuition remains indispensable”. There are many walls and an infinity of different bricks. For him, a grid can be almost anything: “the storm in the wheatfields was captivating; I’ll paint a ship sailing on waves of rye”.

Waves, ripples: a grid like a musical stave. Horticulture – a vegetable garden – becomes another natural grid, alternating peas and carrots and cabbages. His abstracts come together like quilts or fit together like flooring, like parquet, or a great wall of liquorice allsorts, sweet with delicious colours. Then there is the mosaic’s mini-brick as a model and inspiration, the isolated mark of the brush, touched into existence rather than stroked into being – and then the morph into pointillism. In Klee, the one bolts, seeds and becomes the many. If you look at a painting such as Reife Ernte/Ripe Harvest (1924), you see not corn but the orange-gold of ripeness in the background, a central grey wash of soil, and a set of signifiers; a primitive script that looks more like spermatozoa than corn. It isn’t in the least literal but it captures fertility perfectly.

Ripe Harvest isn’t in this show but one of Klee’s greatest pictures is. Pastorale (Rhythms) (1924)has a line of sky-blue at the top. The bulk of the painting is tempera on canvas on wood. Overall, it’s the colour of mildew. It is clearly related to the horticulture paintings, both by its title and its design. Into the thick tempera, between the lines, is scored a continuous series of pseudo-hieroglyphs – an x, an o, a plus sign, asterisks, a trellis of x’s, a candelabra sign like a fir tree, a sequence of gravestones.

It is like a tablet of invented writing, of repeated, unknown letters and shapes – a kind of Rosetta Stone, unreadable yet persuasive, the sign of a civilisation that has vanished, leaving behind only the ghost and promise of meaning; a whole cemetery of writing on a single tablet. It is as beautiful as Yeats’s most beautiful line, from “Nineteen Hundred and Nineteen”: “Man is in love and loves what vanishes./What more is there to say?” Klee gives us the very vanished thing itself, miraculously, impossibly, still there, before our eyes, filling our eyes.

There are several technical innovations to admire. The first is Klee’s invention of the oil-transfer drawing. You cover a sheet with black oil paint and place it on a clean sheet of paper. Then you trace a drawing placed on the oil sheet so that the line is transferred. The line is transformed as it is transferred – becoming slightly ragged, like a scratch that has broken the skin. (Much later, Andy Warhol did something similar with a blotted line made by folding the drawing while it was still wet.) The technique means that the under-drawing is dirtied in places. These soiled patches dispel any hint of the academic artist; the drawings look “found” and satisfyingly primitive rather than composed.

Another innovative Klee technique is the fine watercolour spray at the edges of drawings. In Threatening Snowstorm (1927) we see a town in diagrammatic form, ground plan and elevation. The border of the drawing is a dramatic dusk of brown and grey-blue shrouding the geometric buildings. I daresay the title came last. No matter. The picture unanswerably reorders and reverses that sequence so it provides the perfect illustration, the exact equivalence of imminent snow.

In Sacred Islands (1926) the border is a shawl of faded blue that contributes immeasurably to the painting’s complete success. It is a purged masterpiece of tonal plainness – India ink and blue spray – and immense intricacy. Emerging from the blue border is a kind of architectural parquet, of inlay and dovetail. We know about those beautifully spare, suggestive Ben Nicholson pencil drawings of half a wonky cloister – a couple of lines, a wash of grit.

They are lovely but the Klee is something quite extraordinary – a Piranesian proliferation, a nuclear chain reaction of colonnades, of flights of steps, down and up and indeterminate, of arches, vistas, vaulting – of spandrels, of nonsense, of building that has bolted in a thousand different directions at once.

There is a Kipling story called “The Disturber of Traffic” about a lighthouse keeper, Dowse, whose deranged eye is helplessly held by any pattern, the result of years spent staring at “the streaks”, the tidal patterns of the Flores Strait near Java. As Dowse talks, “All the time his eye was held like by the coils of rope on the belaying pins, and he followed those ropes up and up until he was quite lost and comfortable among the rigging.”

Klee could be rapt by the waves in waves, the waves in wheat, the parenthetical maze of ripples inside an onion, the waves in the grain of wood. What holds our eye in Sacred Islands is the delicate width of the inked units, the counterintuitive, carefully controlled minimalism of the depicted chaos.

In View of a Mountain Sanctuary, 1926, Klee revisits and reworks the topos: here it is stalactites, fractured rocks, millefeuille mineral compressions, contractions and folds. The same India ink, effective enough, but without Sacred Islands’ compelling insanity of detail. Clouds (also 1926) has a dark-grey border and similar ink contour lines tormented into clouds and turbulence. In the end, the difference between the masterpiece and the other two very good pictures is what the hand happens to do – the inspiration, the genius of the fingers, the something chancy that is more than skill.

Another great picture here is Lowlands (1932), a watercolour on paper on cardboard. It, too, is one of several pointillist paintings. From a distance, it reads like a perfect piece of realism – the wet sands, a distant line of sea, a hangover of clouds. Drab, about as exciting as the tidemark in a bath. But close-to it is gripping, because Klee lets us see his working. In the middle of the picture is a single line of bright green dots – the sea – and below it black dots, then blue, then black. Each dot is small, the size of a liquorice cachou. Each is the same and each is different so the viewer has the perfect pleasure of repetition, similar to the pleasure we get listening to a duet where the singers are perfectly in tune yet recognisably different – identical twins you can still tell apart.

The whole picture is so minimalist in its means, you think of Steve Reich or Philip Glass or John Adams. The top and the bottom of the picture are washed with dirty water – water the brushes have been cleaned in. Only the bright green single line of dots is left untouched. The rest of the painting is fearlessly impure, filthy with actuality, lowering and exhilaratingly depressed. This single work is worth a visit and any entrance fee, which in this case should be called an entranced fee.

Craig Raine’s new collection of essays, “More Dynamite”, will be published by Atlantic Books on 3 December