Let it never be said that Silicon Valley types live in a bubble. Sure, many of them harbour dreams of building their own floating nation in the ocean – free from all those pesky US legal regulations about things like immigration and labour rights – but they still understand how the rest of us live, don’t they? 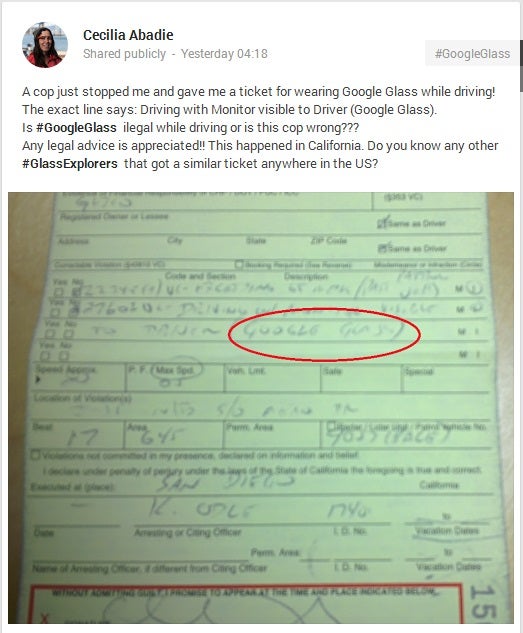 Abadie describes herself as a “Google Glass Pioneer”, and tagged her post – on Google+, which has a very techy userbase – with the #googleglass tag. She is, it’s safe to say, a Glass fan, and the majority of comments underneath are from people wearing Google Glass in their profile pictures (at first), deploring the injustice of the Californian legal system not recognising how useful Glass could be: 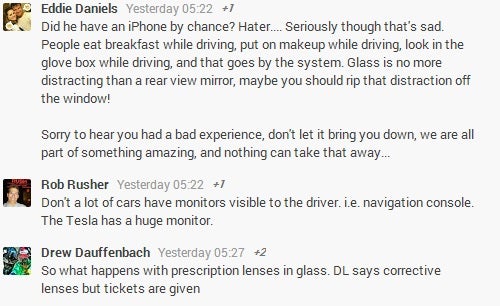 It’s only several hours after the post, as it begins to be shared outside of the Glass community, that people begin pointing out what should be obvious: having a screen in your field of vision that sends you social media and email updates could be a distraction that leads you to rear-end the car in front of you. Abadie says her Glass was turned off at the time but that’s irrelevant.

The law the police officer cites specifically prohibits screens and monitors in cars that could cause a distraction for the driver with video. GPS, music controls, and vehicle information like speed is OK, but every other kind of media is forbidden.

Yes, having your map floating in front of you – or, in future, having some kind of heads-up display like the ones you’ll see in films – instead of off to the side like a normal GPS might be better for navigation, but Glass is a device that does lots of things, including unexpected notifications. From the perspective of a police officer, a defence of “it wasn’t on” or “I was using GPS” won’t wash, just as driving while holding a smartphone will likely result in a ticket for texting behind the wheel.

This does, admittedly, create a bit of a problem for those Glass users who plan on using it as their main pair of spectacles, as they might not be able to drive without their prescription lenses. To which I say: buy another pair. Disrupt the eyeglasses monopoly.