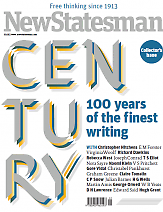 Subscribe to Morning Call View all newsletters
The quick and essential guide to domestic and global politics from the New Statesman's politics team.
THANK YOU
Topics in this article :