Here’s a chart that illustrates something which is relevant both to welfare and public finance, two of my pet subjects. I want to use it as a way of opening up the question: how much does “welfare” for people of working age cost, and how has this changed over time? We hear a lot of assertions about these issues from politicians and commentators. But what is welfare, and what is “welfare spending”? These are not the same question. 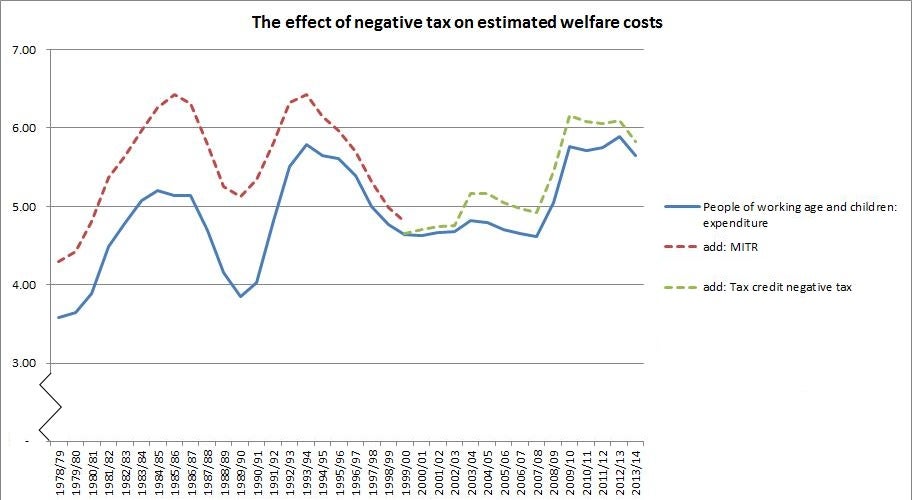 To explain what the chart shows, I need to clarify some terminology. The title of the chart uses the word “welfare”. That term actually has no strict meaning within the UK’s public expenditure control system, unlike, for example, “social security”. It belongs essentially to a political vocabulary. So when people say “We’re spending X billion/Y per cent of GDP” on “welfare” there’s a certain amount of creative leeway, which invites all kinds of obfuscation – for example, as to whether pensions are included or not. I’m using the term creatively as well, but I’ll try to avoid obfuscation. In what follows, pensions and benefits to pensioners are excluded.

In contrast to welfare, “public expenditure”does have a strict meaning. It refers to money which the government spends, having extracted it from taxpayers (mostly) or borrowed it. What it doesn’t refer to (in the UK system) is money the government chooses not to collect, by foregoing tax revenue through selective tax reliefs, exemptions, allowances and so on. So if we ask how much the government spends on welfare, or anything else, we are implicitly ignoring the costs government incurs by foregoing revenue through selective tax measures. This creates a problem, because some elements in the cost to the Exchequer of what is commonly referred to as “welfare” represent tax revenue foregone rather than spending. That’s why the title of the chart refers to the “cost” of welfare rather than “welfare spending”, although it shows the latter as well (the blue curve).

The most high profile example of foregone revenue within welfare concerns tax credits. For many families, tax credits take the form of an offset to income tax liability rather than a cash transfer. This is commonly referred to as the “negative tax” component in tax credits, and it is far from being trivial: about £3bn in 2012/13 according to DWP.  The dotted green curve on the chart shows welfare spending plus the negative tax component.

But if we include this foregone government revenue in estimating the cost of “welfare”, and it is routinely included in statements by government politicians, we should surely be consistent. If one form of “negative tax” is included in the “welfare” total, we should be including all negative taxes which directly affect the distribution of personal income.

It’s frequently claimed that “welfare spending” in the UK is at unprecedented levels, and that there was a “structural” increase in spending under the previous government – that is, independent of the effects of the financial markets crisis. Expect to hear these claims reiterated endlessly in the run up to this summer’s spending review, in which the Chancellor intends to announce some sort of “cap” on welfare spending. As the blue curve on the chart shows, neither claim holds for working age welfare spending, which was at similar levels after the crash and in the mid 1990’s, and which fell and then remained remarkably stable under Labour up to 2008/9. Including the negative tax element of tax credits changes the picture slightly, raising the cost (not spending) at the peak to 6.16 per cent of GDP compared to 5.76 per cent at the previous peak. If you include negative tax, it looks as if the claim of a structural shift (again, in costs, not spending) stacks up, although this still left costs in 2007/8 (the last pre-recession year) lower than in 1996/7 by about 0.5 per cent of GDP.

But what about other forms of tax relief? To illustrate why this is important for time series comparison, the dotted red curve shows working age welfare spending augmented by the cost to the Exchequer of Mortgage Interest Tax Relief (MITR), which was abolished in 2000 and which the Major government had begun phasing out in the mid 1990’s. As housing benefit, a subsidy to renters, is included in the “welfare spending” total, it makes sense to include MITR, a subsidy to homeowners with mortgages, in the “welfare costs” total.

Inclusion of just this one form of tax relief dramatically changes the historical picture of costs. At its peak in 1990/91, MITR was subsidising homeownership to the tune of 1.3 per cent of GDP, while working age housing benefit was costing 0.5 per cent (at its highest level, it has never exceeded 1.1 per cent of GDP). If, as seems reasonable, we include this personal subsidy in the working age welfare costs total as well as the negative tax element of tax credits, then the points where working age welfare was costing UK governments most were 1985/6 and 1993/4, 6.4 per cent in both years compared to 6.16 per cent in 2009/10.

There has been no structural increase in the level of aggregate working age welfare spending for a very long time. Not that I expect the coalition to acknowledge this point, as the idea of a structural increase under the previous government seems to be an article of faith for both parties. Still, a government that boasts about taking lower income workers out of income tax might at least consider the perversity of citing a measure which had precisely that effect (the negative tax element of tax credits) as a contributor to “out of control” welfare costs.

A longer version of this piece was originally posted at Declan’s blog, and it is republished here with permission.