A close friend of mine (she of kinky sex boots fame) recently asked an interesting philosophical question: “Do you think if you’d gone on 21 totally normal dates, and not written the blog, you’d still be single now?” It’s an interesting question, but I suppose I’m a bit too far down the rabbit hole now to go back.

Indeed, it’s just starting to sink in that any date I go on in the future will probably find out about the blog, will probably read it. Hopefully they’ll like it. Maybe I should spend more time talking about how I have the sort of incredible sculpted body normally only observed on ancient Greek statuary, with perfect buns of pure Athenian marble. Of course, that would be, as we say in journalism, “a lie”. Maybe I should mention my incredibly cute pet?

Yes, I keep a pet hedgehog, and she is lovely. Most people’s attitude to the little beast are pretty much summed up by this exchange: 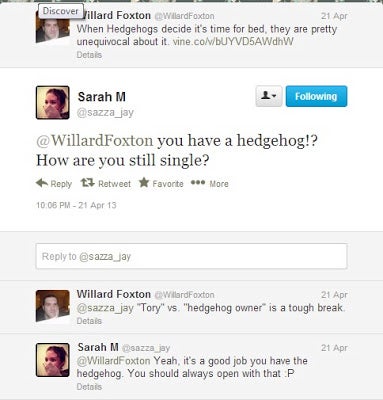 How, indeed, am I still single?

It often comes up on dates. The hedgehog, not the singleness. I mean, being single is normally the default for dating, right? Most people are, it must be said, charmed by the hedgehog. People are often surprised you can keep them as pets. They’re not spiky unless they get upset. On top, it’s not much different to touching a hairbrush, but they have lovely fluffy bellies that they enjoy having stroked. They say pets are like their owners, so draw your own conclusions about that, I suppose.

So, anyway, I recently went on a date with a very attractive lady. I was a little unsure of exactly how attractive she was, as she had one of those classic online profile pictures where a key part of her was obscured – the lower part of her face, by a wine glass, in this case. I’ve learned to become a little wary of obscured picture like this, but what the hell, I thought.

We were due to meet at a lovely middle-eastern place for breakfast. I was about half-way there when she texted me to say “I realise this is very weird, but I’ve woken up with a lost voice. So weird. Tea hasn’t made any difference. I feel 100% well so if you’re chatty I can come and listen and smile?” It was weird, but I, loving the sound of my own voice, thought, “Why not?”.

So, we met up, and she was not only just as attractive as the picture hinted, but also, fortunately, she was able to speak, albeit in a husky tone. We chatted over coffee and shakshuka (it’s a lovely North African breakfast of eggs, peppers and onions) and got along brilliantly. She was smart, beautiful and fascinating, super-successful, all the things I want in a woman.

I was really excited, all ready to ask for a second date, and then she asked me what I was doing for the rest of the Saturday. I answered honestly that my only plan was going to try to teach my hedgehog some tricks – nothing exciting, no blazing hoops to jump through, just how to run on a big wheel.

She gave me a look as though I’d said I was going to go home and tend to my shrine made entirely of human skulls. “You keep a hedgehog?! Why on EARTH would you want to do that? Why would you want to keep a nocturnal burrowing vicious little spiky monster like that?” I tried to explain that hedgehogs are lovely really, but she was having none of it.

She HATED animals. Hated them with an almost unbridled passion. Couldn’t understand why anyone would want a pet. She said that animals were only for eating; and then provided me with a recipe for cooking and eating my lovely little pet alive. It involved rolling the hog in clay, then baking it. Apparently, when you shatter the clay with a hammer, the spines come out and you can devour the juicy hedgehog meat inside. She’d got the recipe from gypsies, apparently.

It’s fair to say after that after “I hate your pet so much I’d kill it in a cruel way and the eat it in front of you”, a second date wasn’t on the cards. She hated animals, I love them. Irreconcilable. I guess it made me realise that I’d find it really hard to live with someone who didn’t like animals, which I’d never really realised about myself before.

Was I really enough of an animal lover to go on Pet Lover dating? While I like animals, I didn’t feel I could date the sort of person that would, for example, buy their dog a super-hero costume or humiliate their hedgehog on buzzfeed.

Within a week of dating the animal-loather, I got the opportunity to find out how a date with an animal lover would go. I went on a date with a woman who loved her Dachshund so much we’d have to go to a dog friendly pub, as the dog apparently couldn’t bear being left alone. We met in the pub, and in she came with her absolutely beautiful little Dachshund puppy, who was incredibly, incredibly cute.

The girl in question was incredibly glam and perfectly turned out, with incredible Hollywood award show hair. She worked in publicity, and fortunately, in the part of incredibly high end entertainment publicity where taking your dog with you everywhere was seen as a positive advantage. We got talking about work, the media, and of course, our pets, and dating them.

She too had encountered a date where she accidentally unmasked an animal-loather, and here’s the really weird part: that bloke had offered her a recipe for cooking and eating her dachshund. It seems to be the go-to move for anyone who discovers their date has a pet they aren’t keen on. It must be said, there is an acceptable middle ground of “I just don’t like pets”, before you break out theHugh Fearnely-Whittingstall recipes.

Anyway, the fabulous dog owner and I got on very well, and crucially, the dog liked me enough that he kept trying to shag my arm all through the date, which was a new experience.

So, there you go. Another date, another unfulfilling sexual adventure…:)