After my last date, I decided to take it easy for a bit, and take my foot off the dating blog gas. I’ve resisted using the phrase “retreating to lick my wounds”, as it would be all too distressingly graphic, but, in essence, that was what I was going to do.

Now 75% of the way through my Internet dating adventure, I’d learned a great deal about exactly how the process works, in a major city, at least. London is a hive of dating activity, catering to every possible need, taste or desire. As tempting as things like heavyweight Date Boxing sounded, my own desire to remain uninjured suggested that what I needed was a change of pace.

As a veteran of London dating, I was starting to wonder what online dating is like outside of the capital. Anecdotally, lots of my friends who live in assorted small towns had told me it wasn’t much good; a friend who’d tried it in the fishing village I come from said, in his inimitably earthy style, “it’s only bifters or bitter single mums on the web. I date in bigger, cooler places, like Ashford or Maidstone.”

Astute observers of British geography may note that ugly Kentish commuter towns like Ashford and Maidstone are neither “big”, nor “cool”. My own home town is a tiny, quaint village called Hythe. Our main exports are fish, seaside tat, and happy memories of 99 Flake ice cream by the beach.

There’s one nice-ish restaurant, one nice coffee shop, a 1000 year old church, a 3ft deep canal that was expected to stop both Napoleon and Hitler, as well as eight dingy, interchangeable pubs. Once, we had a female Dolphin in the bay, that our clueless local paper named Dave, on the basis that all Dolphins are boys. It’s not exactly a happening place.

It was famously described as the fourth worst place to live in England in the book “Crap towns”, whose authors said of it, “It’s the sort of town where Ian Duncan-Smith is regarded as rather too liberal. The sort of town where incest rules to such an extent that men give themselves Father’s Day cards. Perhaps the most spirit-crushingly tedious town in Kent, Hythe is the place that makes nearby Folkestone look like Las Vegas.” As a native, I can’t say any of that is terribly unfair. Anywhere that makes a dump like Folkestone seem like an exciting metropolis has to be dreadful, right? 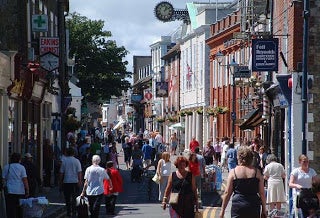 Friends who had tried online dating there told me that even when you logged on to the biggest dating sites you would personally know at least half the matches you were offered. Stories of the intense awkwardness of stumbling across work colleagues or friends with exaggerated or strange profiles proliferated. In one particularly hilarious example of the form, a chap falling foul of a world where you’re identified by a user name like “HunkySuperBottom105”, and pictured only as an oiled, muscular torso, ended up going on a date with his own brother by accident.

However, seeing as pretty much everyone I know in my home town is happily married, and I’m 99% sure none of my sisters are on Grindr, it was probably pretty safe. Also, dating a local girl would make my mum very, very happy. It’s always been her dream that I’ll meet a “nice, little girl”, move to Hythe, get a secure job with a good pension, and have babies. I have thus far failed on every count.

I decided to use Match.com for my hometown date. It’s a pretty big site; one of the biggest. It’s TV advertised, so I felt I had the best chance of meeting someone back home from it. I felt a little guilty using a free pass I blagged off a tube advert (at match.com/tube) to go on a date outside of London, but obviously not *that* guilty. The first thing I noticed was that out in the provinces, the average age of an online dater is considerably older than in London.

I’d set it to find women aged 25 to 40, and the vast bulk of the women were in the 36-40 range. There were a surprising amount of them, though, so it wasn’t the barren wasteland I’d imagined. Fortunately – or unfortunately, as you might see it – my narrowing of my search radius to within ten miles of my home town provided only one lady living in Hythe.

I sent her a message and luckily, she replied, and was free the weekend I was down visiting the family. It’s the best hit rate I’ve ever had on a site, but to be fair, in this particular incidence I was literally the last man on earth, so I probably shouldn’t pat myself on the back too much.

One slight complication was that when I suggested the one nice restaurant in town for our date, she pointed out she’d rather not go there, as it was where she worked. I offered to drive us to a nice gastro pub in the countryside, and she accepted. It was on.

When I told my mum I was going on a date in Hythe, it was like I was listening to a greatest hits of Willard’s mum’s dating advice compilation. She started with the classic “You haven’t told her you’re a journalist, have you? Women want a man with a proper job,” followed it with an extended B-side cut of”Why don’t you settle down? You are thirty-three you know,” and rounded off with a rare acoustic version of the feelgood classic “I’m getting older, I want to have more grandchildren, get a move on.”

I also didn’t tell my mum where I was going on the date. This is because she is world-class embarrassing, and probably would have thought nothing of just turning up. Once, on meeting a girlfriend, my mother sized her up, looked the poor girl in the eye, and said in a thick Scottish burr, “Oh, you’ve got fine child-bearing hips!”. Which is EXACTLY what every girl wants to hear.

So, on the night of the date, I drove my car to the girl’s house, knocked on the door at the appointed time, and her dad came to the door. It was almost exactly like being 17 again. She appeared quickly, and with a very forceful ” BYE DAD”, we were off. The 15 minute car journey with a complete stranger was a bit weird, especially once we started going down country lanes.

A low point on any date is when the other person turns to you and says, only half-joking, “You’re not going to murder me, are you?” Fortunately, my window into what being a serial killer must be like was brief, as within seconds of her asking, the pub was in view.

We parked the car, walked inside, had a lovely evening. She’d gone to the local girls grammar, then University, picked up a boyfriend, a house and a job up North, but all of those had gone sour at the same time. She’d run out of money before finding a new job or a new flat, so she’d returned home. That had been a year before, and after what sounded like a soul-destroying couple of months on the dole, she’d taken a job as a waitress.

She was applying for other jobs, trying to, as she put it, “sort her life out”. She asked me about how to get into the BBC and we had a brief careers chat. We had a shared passion for writing fiction, so weirdly ended up having a pretty academic chat about story structure.

What became fairly apparent early on, was we didn’t really have a passion for each other. It wasn’t in any way unpleasant, just by the time we were getting her third wine and my third coke (driving, see) we’d pretty much established that we weren’t romantically interested in each other. It’s a relief when that feeling’s mutual and everyone is grown up about it. Indeed, by the end of the evening, we were thinking of friends we could set each other up with.

I dropped her back at her house, drove back to mums, and parked the car. I quietly opened the door, and there was mum, waiting up for me. Seeing me home, alone, before midnight, she gave me an acid look, and exclaimed “Och, you blew it, didn’t you?”