The chemist Sherwood Rowland once made a forceful point about the utility of environmental research: “What’s the use of having developed a science well enough to make predictions if, in the end, all we’re willing to do is stand around and wait for them to come true?”

It is a question that must arise regularly at the Paris climate talks. Decades ago, scientists warned that passing 400 parts per million of carbon dioxide into the atmosphere would result in significant changes to the climate. The years have passed without any meaningful attempt to avert those changes – and this year we arrived at 400 parts per million. We are now emitting carbon dioxide above the scientists’ worst predictions. Researchers are no longer waiting for their predictions to come true. They are finding out how little people cared about them to begin with.

In 2009, 63 per cent of people in 20 surveyed countries viewed climate change as a “serious problem”. According to a survey published last month, it is now fewer than half that. Higher in people’s list of concerns is fighting terrorism and expanding the economy. That makes spending significant sums on climate change mitigation akin to political suicide – and so it won’t happen. However, the climate scientist Michael Molitor has brought an interesting new solution to the table, one that involves directly addressing public concerns about economic growth.

Molitor is probably best known as the scientific adviser on the Hollywood blockbuster The Day After Tomorrow. The job didn’t win him many fans among his peers (although the movie was a significant driver of public concern over climate change). But, like Rowland, he is now more concerned with reaching decision-makers than scientists.

What government should do to tackle soaring energy bills

Where does the UK sit in the world’s turbulent energy landscape? 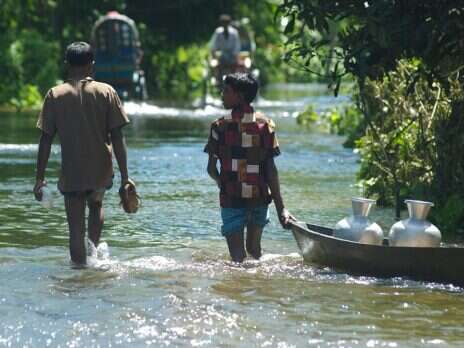 World leaders must prepare for the climate migration challenge

In a recent talk at Imperial College’s Grantham Institute for Climate Change and the Environment, Molitor argued that we have associated “the wrong problem” with fossil fuels. The pertinent problem is that continuing to base an economy on fossil fuels cannot deliver economic growth.

Between 1950 and 1980, a massive hike in fossil fuel use created a host of new technologies and expanded the world’s economy at an unprecedented rate. But then the world stood still again: fossil fuel use has not become any more efficient for decades. “The thermodynamic efficiency of using them and the amount of capital that you have to spend to keep using them is now so great, it’s acting as a brake on growth,” Molitor says. “That’s the single biggest reason for walking away.”

So Molitor has ditched the scientific arguments. He is now persuading financiers to move away from fossil fuels just because there’s more money to be made elsewhere. He is selling the idea to governments, too: ditch fossil fuels and you can finally give the public the economic growth it craves.

He is not the only one singing this tune. Those with skin in the game are already reacting: the German energy giant E.ON is selling off its fossil fuel assets and Goldman Sachs has said that coal-generated electricity “has reached retirement age”.

So, scientific arguments fall on deaf ears but – as ever – money talks. However painful to acknowledge, it’s a lesson worth learning. “There are plenty of compelling reasons to drop fossil fuels but they haven’t moved the needle at all,” Molitor says. “If you can demonstrate that fossil fuels are the number one reason for flat economic growth, you can finally win.”