In May, the New Statesman gathered a panel of military experts, defence industry senior leaders, and tech industry insiders to discuss the role of digitisation in strategies for national defence. The online round-table event, sponsored by Cisco, represented a unique opportunity to explore the implications of the new fields of cyber and space, now rising in prominence alongside the traditional domains of defence: land, sea and air.

The evolving character of warfare, set out in the government’s Integrated Operating Concept 2025 (IOpC), is defined by these emerging fields. The government’s recent Integrated Review signalled that defence strategy would pivot towards cyber, a field in which data, information and innovation are key drivers of modernisation.

Introducing the discussion, event chair Cate Pye, partner in digital trust and cybersecurity at PA Consulting, summarised some of the main positions set out in the IOpC review, which, according to the government, “will lead to a fundamental transformation in the military instrument and the way it is used”.

“Traditional war fighting has always focused on the physical domain,” said Pye. “We now have the virtual domain… and the discussion today is about what the role of digitisation is in that.” 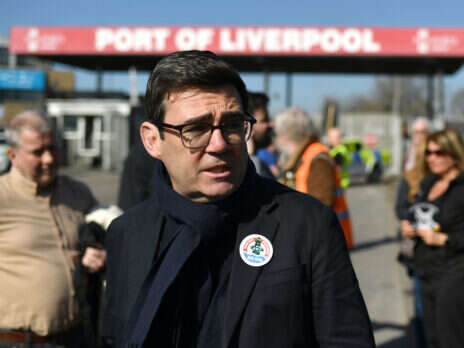 Air Marshal Andrew Turner, deputy commander of the Royal Air Force, made opening remarks on the implementation of IOpC and the challenges and opportunities that it presented. “The era of uni-domain activity is over,” he said. “Multi-domain integration is essential to our collective future and our ability to prosecute operations.” Turner proposed that, going forward under this new dispensation, if the people within an organisation are its greatest resource, then data should be thought of as its second-greatest resource. The ability to “gather, synthesise and protect data” will be essential in an integrated defence set-up.

Vice Admiral Ben Key, commander of joint operations, strategic command at the Ministry of Defence, gave an appraisal of the IOpC review. “One of the insights and deductions in IOpC is that mission command in the information age can now be enabled by information-age technologies,” Key explained. “It will deliver the most significant command and control transformation in the past century.” However, he added, at the moment “the construct we have for how we go about our business is still based on a 20th-century model”.

In response, David Meads, vice president, UK & Ireland at Cisco, said that the implementation of IOpC and any digitisation strategy rests on a focus on “people, process and technology”. Organisational culture plays a pivotal role, he said, and large organisations embarking on digital transformation projects need to support their people on the digitisation journey.

Al Lynn, Cisco’s vice president of engineering, emerging technology and incubations, and a former three-star general responsible for the US Department of Defense global networks and its cyber defence, set out the geopolitical challenges facing many nations in the Western world, including hostile state and non-state actors embracing non-traditional, hybrid or non-linear methods of warfare. “The enemies of freedom and democracy have figured out that going to war is a bad idea,” he told the round table, “so they’ve chosen to go and look at attacks they can do that are short of war… Bombings, terror attacks, cyber attacks.”

Also referencing the actions of some of the West’s adversaries, Andrew Dobson, chief technical officer and head of engineering at Viasat UK, predicted that in the coming years “the biggest disruption is going to come from space”. Space will be crucial in determining position and timing, he said, and is key to making decisions on the battlefield, and central in command and control and autonomous capabilities. “Russia and China have indicated joint development on a southern [pole] lunar spaceport,” he added, and so there is an urgent challenge to keep pace in this new domain.

Dave Sloggett, visiting research fellow at the Institute of Mathematics at the University of Oxford, said that “recent writings by Russian military experts have suggested that they’re starting to move towards parrallelising the OODA (observe, orient, decide, act) loop” [a four-step approach to decision-making]. That was, he supected, something that “increases risk by making things run in parallel, because you haven’t got the deliberation of the OODA loop”. The UK and its allies, he suggested, need to think about “whether or not we have the risk appetite to operate similarly”.

Speaking from his perspective as chief information officer at the Ministry of Defence, Charles Forte was positive about the prospects of digitisation and integration across the defence domains. “The glass is half full,” he told the attendees. “But we have a long way to go in building that cohesive plumbing, in the digital or IT sense.” He qualified his comments by pointing out that upskilling the workforce remains one of the key challenges for building an integrated, digital future.

Also optimistic about the UK’s prospects was Rob Bassett Cross, CEO of Adarga, who claimed there was “huge reason to be optimistic about what is going on” and said that “generationally, we’re going to solve all of these problems”. However, he cautioned that it “may not be quick enough for the timeline set out in the IOpC report”.

Ian Levy, technical director of the National Cyber Security Centre, emphasised the importance of getting the basics right when it comes to protecting systems from cyber attacks and cyber espionage. Sometimes issues arise when procurement contracts for digital infrastructure specify only a certain number of patches, leaving vulnerable systems without updates. “AI, cyber, 5G, blockchains are all well and good, but you have to patch systems, first and foremost. That’s one of the basics that you have to get right,” he said.

Speaking candidly about the UK’s innovation capabilities, Daniel Clarke, head of applied science at Adarga, said that the UK was one of the world’s leaders in defence technology, but it lacked capability in the newer, emerging fields. “From F-35s, attack submarines, aircraft carrier, Boxer armoured fighting vehicles – the UK has developed great technology,” said Clarke. But, he added: “It’s all very much sunset technology, whereas the emerging capabilities of cyber, artificial intelligence and machine learning, hyper-scale cloud computing – how do we bring these into the military and the wider defence sector?”

Oliver Waghorn, managing director of government relations at BAE Systems, brought the perspective of a non-technical specialist into the discussion. Why, he asked, doesn’t cyber security and the centrality of cyber defence in the UK’s security systems “feature more keenly in political debate?” The primary response to the government’s Integrated Review was to criticise headline cuts to the size of the army rather than “celebrate some of the great digital investments that defence is making”.

Major General Jonathan Cole, chief information officer of the British Army, pointed out that the onset of new technologies analysing big data and automating response options meant “there’s almost infinite courses of action and amounts of variables”, raising questions about human choice versus automation that will need to be tackled if IOpC is to be properly realised.

Effective, holistic defence strategies are now at the intersection of the industrial age and the information age, and integrating operations and de-siloing activities in response to emerging threats will be essential in the UK’s future defence framework. For Al Lynn, part of the solution will be to foster “a deep relationship between industry, government and the military”, citing previous successes in innovation that have emerged as a result of public-private partnership: “Radar, microwave, GPS, satellite systems, the internet, have all been developed in collaboration between industry and government… and we can do it again.”

The round table represented the first step in a journey of future productive partnerships. Stakeholders were determined to continue working together towards the common goal of effective implementation of IOpC. The introductions and relationships established at the event will be followed by focused workshops, pilots and proof of concepts, with participants committed to maintaining the collaborative approach set out by attendees. Together, with further discussions between the event organisers, Cisco, the New Statesman, and the industry experts and military figures in attendance, the future of the UK’s defence will be built, strengthened and bolstered.