A paid-for Facebook post by an anti-vaccination campaigner has been banned by the Advertising Standards Authority (ASA) on the grounds that it made unsubstantiated claims and caused unjustifiable distress, it was announced today. However, Facebook continues to offer advertisers the ability to target people who worry that vaccinations may be dangerous to their children.

The sponsored post was bought by Larry Cook, an American anti-vaccination campaigner who runs Stop Mandatory Vaccination, one of the largest anti-vaccination groups on Facebook. The group has more than 146,000 members. Spotlight understands that funds for the boosted posts were raised using a GoFundMe page that was also promoted on the group. One post in the Facebook group stated that the funds would be used “for multiple vaccine caused death stories on Facebook targeting parents with paid boosts so they would see death after death after death”.

The sponsored post included the words “any vaccine given at any age kill your child” and a picture of a baby with its eyes closed, accompanied by dates and other text that appeared to convey that the baby had died after receiving vaccinations. The ASA ruled that “we had not seen sufficient evidence that showed all vaccinations were proven to have the capability of causing death to children”, and that its “claims were likely to cause fear or distress to readers, particularly parents who may be looking for factual information about the risks associated with vaccinations for children”.

Vaccines have been a subject of controversy since 1998, when Andrew Wakefield published a paper in which he claimed to have established a link between the MMR (measles, mumps and rubella) vaccine and autism. The claims were proved to be false and fraudulent by a number of peer-reviewed studies, including by the NHS, and Wakefield was struck off the medical register.

Watch: NS and PMI webinar on how England can go smoke-free by 2030

Sponsored posts on Facebook are created by users and not reviewed by the company, although they may be removed if they violate Facebook’s policies, which include the statement that “Adverts must not contain deceptive, false or misleading content, including deceptive claims”.

However, Facebook continues to offer the ability for advertisers to target people who are interested in “vaccine controversies”. Spotlight found that the company’s Ads Manager tool suggested adding demographic categories that include “new parents”, “parents with toddlers (01-02 years)” and parents of children aged 3-5 or 8-12 to ads targeted at these people, who may be unsure whether vaccinating their children is the right course of action. 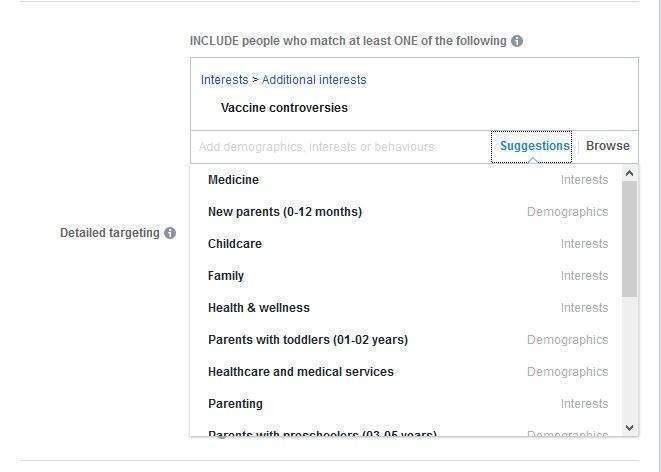 In December 2017, two Australian social scientists published research in which they suggested that “social media may have a role in spreading anti-vaccination ideas and making the movement durable on a global scale”.

In the UK, uptake of the MMR vaccine has dropped for four years in a row and is now at its lowest level since 2011.

On 18 February 2015, Mark Zuckerberg recommended Eula Biss’s On Immunity to his Facebook followers, concluding that “vaccinations work and are important for the health of everyone in our community”.