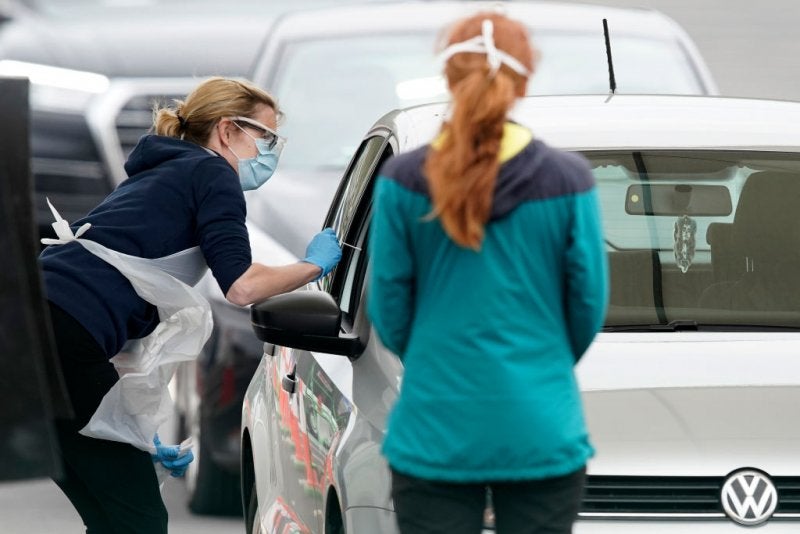 Key workers and their families will today be able to book a free coronavirus test if they are symptomatic. But the government’s promise that “anybody in a care home who has symptoms now gets tested” was unravelled overnight by a leaked email from Public Health England. The email, sent to a care provider on Thursday and then leaked to Labour MP Peter Kyle, said testing processes for all symptomatic residents “have still not been established”. PHE told the Guardian that its policy remained to only tests residents in an initial outbreak, and that testing every symptomatic patient “isn’t really beneficial”. It said that the “Department of Health and Social Care was rolling out greater testing, so that’s when they get involved”, suggesting some residents will have to rely on the government’s mobile testing sites. Yesterday, the World Health Organisation warned that as many as half of all Covid-19 deaths in Europe occurred in care homes (official data for England and Wales puts the figure at 16 per cent).

The Guardian also reveals that hospitals planned to take over one of the government’s flagship coronavirus testing centres after it lost results for NHS staff. Doctors sounded the alarm after the drive-through centre at Chessington World of Adventures failed to deliver results, sent results to the wrong person, and was unable to reach doctors because it had recorded the wrong telephone number. The chief executive of Epsom hospital wrote an email in early April that said: “Deloitte who have been commissioned by the Department of Health directly for this are not running this as well as we would like … [We] are asking whether we can take over the running of the Chessington centre because we really need it to work much better than it is.” The doctors withdrew their plan after performance improved.

Lastly, the Telegraph reports that Prime Minister Boris Johnson plans to return to work on Monday, with ministers hoping he will kickstart plans for publishing a lockdown exit strategy. Senior cabinet ministers are worried that a long lockdown will shutter tens of thousands of companies and devastate the UK economy, the paper reports. Downing Street insists there is still no official timetable for his return.

US: President Donald Trump’s suggestion that injecting people with disinfectant could combat coronavirus has been met with criticism and ridicule from experts. Responding to the results of a study that showed bleach could kill the virus, Trump said: “And then I see the disinfectant where it knocks it out in a minute. One minute. And is there a way we can do something like that, by injection inside or almost a cleaning? So it’d be interesting to check that.”

Europe: EU leaders have agreed to raise a €1 trillion emergency fund to help Europe recover from the coronavirus. Full details of how the money is raised will be agreed next month. Meanwhile, €540bn of funding will be available separately from 1 June.

Ecuador: The country’s case total is almost double previously thought, officials confirmed, as they added 11,000 new infections to the existing total of 11,183. The new infections resulted from delayed testing.

Czech Republic: The government has brought forward plans for relaxing restrictions by two weeks. All shops, restaurants and hotels will be allowed to open by 25 May.

South Korea: South Korea reported no coronavirus-related deaths in a 24-hour period for the first time in April. The government also announced cash handouts would be given to all households, rather than just middle and low-income ones.

South Africa: President Cyril Ramaphosa announced the easing of some lockdown measures starting 1 May, citing economic concerns. Some businesses will be allowed to reopen with a third of their employees, but public gatherings will remain banned.

Why the UK needs to start preparing for the next pandemic

Why intimate first-person newsletters are my saving grace during lockdown