When Robert Larter set off for his two-month expedition to Antarctica on 26 January, he had no way of knowing that a short item in the news about Wuhan, China would culminate in one of the most unpredictable trips of his career.

Larter has worked with the British Antarctic Survey (BAS) for 30 years, participating in more than ten Antarctic expeditions. As a marine geophysicist, his work focuses on Antarctica’s rapidly changing ice sheets. His research for BAS has been critical for predicting the rising sea levels in years to come, and the purpose of this year’s expedition was no different.

The journey to Antarctica is never easy. “It’s fairly quick in terms of going to the other end of the world,” Robert says. After a 30-hour journey to Chile’s most southern port, Robert took a boat for ten days across the infamously rough seas of the Southern Ocean to Thwaites Glacier, the region his team planned to research.

Robert was one of 50 people living on board the American research ship RV Nathaniel B Palmer. Work onboard the ship operates 24/7, so staff took shifts to monitor findings throughout the night. With one phone between them, calls home were infrequent. “That wasn’t too much of an issue,” Robert says. “You don’t really have that much to say if you’re just on a ship all day.”

How big is occupied Ukraine? Use this interactive map to find out

[See more: How poor handling of Covid-19 has caused uproar in Belarus]

The team had limited access to the internet but messages via social media began to slowly trickle in. “It was about a month into our trip that we began to take notice of the pandemic,” he says. “When they postponed the big football games in Italy, I thought wow, this is becoming serious.”

As coronavirus advanced, the BAS carried on as usual. Isolated at the end of the world, Robert’s team were among a handful of people on the planet who did not have to worry about catching the novel coronavirus.

In the eight weeks the team anchored near Thwaites Glacier, the waters were perfectly still. “It was like living on a giant lake,” Rob says, “it’s a very beautiful place, chocolate-box pretty.”

Then, fairly rapidly, countries began to close their borders. “We started to hear that the Chileans were turning away ships, not even letting them port. We thought we wouldn’t be affected because we had essentially been quarantined for eight weeks already, but we weren’t sure. It was very concerning,” Robert says.

“A member of the team lived permanently in the US but wasn’t a citizen. When we got news that the US had closed its borders, he realised he wouldn’t be able to return home at all.”

The team’s expedition was due to end on 25 March, but by 16 March Chile had closed its borders and airlines were cancelling routes. “If we’d gone back to Chile, it wasn’t clear that we would be able to get out,” says Robert. The team was at a critical juncture; the only solution was to sail for a day to Rothera, the nearest BAS research point, 800 miles from the South American continent.

“Once we arrived at Rothera, we couldn’t turn back,” Robert says. “After we had stepped off the ship we were not allowed back on, in case we contaminated the other passengers who were travelling back to the US.”

Marine biologist Nadescha Zwerschke had been living and working at Rothera for 16 months when Covid-19 became a pandemic. The research station, built in 1975, perches on an island that forms part of a huge peninsula that juts north into the Southern Ocean. It has an airbase, a gym and a TV room, but life on the base is claustrophobic. If members of the team wish to leave the station they must be accompanied by a guide at all times.

When the pandemic hit the UK, Nadescha wanted nothing more than to return to her family. “Generally no matter where you are in the world, if you need to get home, you can. But in Antarctica, especially in the winter, you just can’t. If you’re not feeling good or something is happening at home, it can be really difficult.”

“Everybody at some stage will feel lonely at the station,” she says. “In the winter you are there with 23 other people, but these are people you’ve just met a couple of months ago. Although you become friends quite quickly down there, it’s still different to having your family or partners. It’s hard sometimes when they are just very far away.”

In total, 120 BAS staff were stuck across the vast frozen continent, including Robert and his team. The BAS operation managers were faced with the mammoth task of returning almost the entire cohort to the UK before the Antarctic winter began in May.

To leave people in the Antarctic camps over the winter would have been disastrous. “The station can’t accommodate that number of people for that length of time. Plus, all these people have gone south expecting to come back; they’re not expecting to spend a whole winter down there,” says Robert. Winter in Antarctica reaches -60°C. Towards the southern pole, months go by without sunlight as storms rage across a mass of ice that is larger than Europe.

For Robert and Nadescha, the solution came by sea. The majority of BAS staff were flown to the Falkland Islands from the Rothera airbase. Once they arrived on the islands, they were placed in extreme isolation for 10 days, permitted to leave their hotel rooms for just two half-hour periods a day.

“This was the hardest part”, remembers Robert. “Lockdown is nothing after being stuck in a hotel room for 23 hours a day.”  Eventually, the BAS was forced to charter a cruise to take the teams home, stopping off in Senegal to refuel. 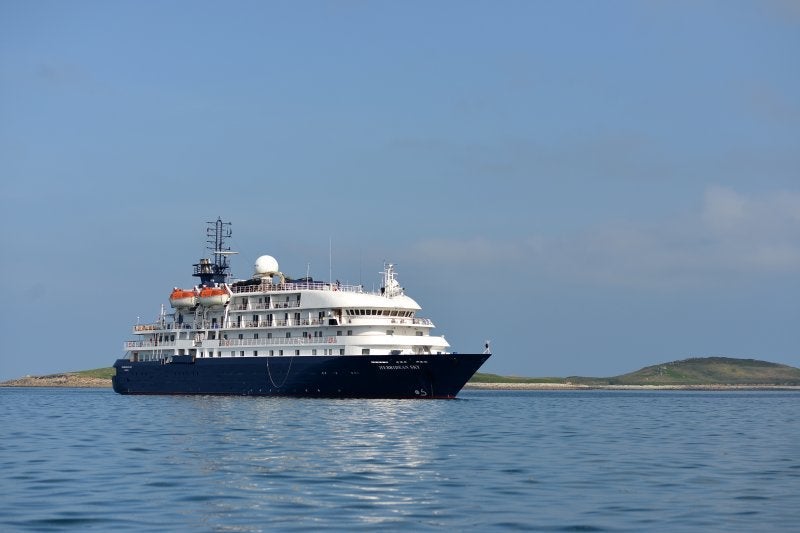 “Antarctica is a very beautiful place,” says Nadescha. “My best times were in the winter, when we got to scuba-dive through the ice. That was amazing.” When Nadescha returned home to Germany in April after 16 months away, the thing that struck her most were the insects in the air. “I hadn’t seen any for nearly two years,” she says.

Currently, 23 people from the British Antarctic Survey remain on the continent, thousands of miles from the pandemic that still simmers at home. According to Rob, future exhibitions are now in jeopardy. “We have to do everything we can to keep the virus out of Antarctica. Other constraints are that international travel is still very difficult and we don’t know how that’s going to change the rest of the year. I think we are planning a very minimalist season for the coming winter.”

But for Nadescha, the expeditions continue. “I’m currently looking into going to the Arctic next year,” she says. Robert remains at home in Cambridge with his family, spending time in the BAS labs, examining his Antarctic findings. “It’s time to relax,” he says. “It’s been quite hard work.”