When Adam joined the Lost Edinburgh Facebook group, he simply wanted to look at historic images of the city.

“I studied history at uni and I still love it,” he says, “and Edinburgh is my favourite city. The Facebook page for Lost Edinburgh was really good, and I thought the group would show me more historic pics and information about it.”

Adam, who asked to use only his first name to avoid being removed from the group, says his Facebook news feed was immediately flooded with history-related posts mostly of the kind he was expecting. Largely 20th century images of the city, the group is dedicated to historical images and nostalgia, a common theme for Facebook history groups. These groups are popular across all major cities in the UK. And they aren’t just a niche space for history enthusiasts, many have thousands of members – some tens of thousands.

Initially, Adam enjoyed the content, but he soon started to notice a pattern. There was a type of post that appeared near daily and was often left undeleted despite its content.

“I couldn’t believe people were actually posting these things,” he tells me. “Some of the people in this group are, in a bad way, absolutely fucking wild.”

The posts that Adam is talking about are deeply racist messages, images, and slang, often including a racial slur. They were being posted almost every day and getting swathes of positive attention from other group members, even if they were then deleted. 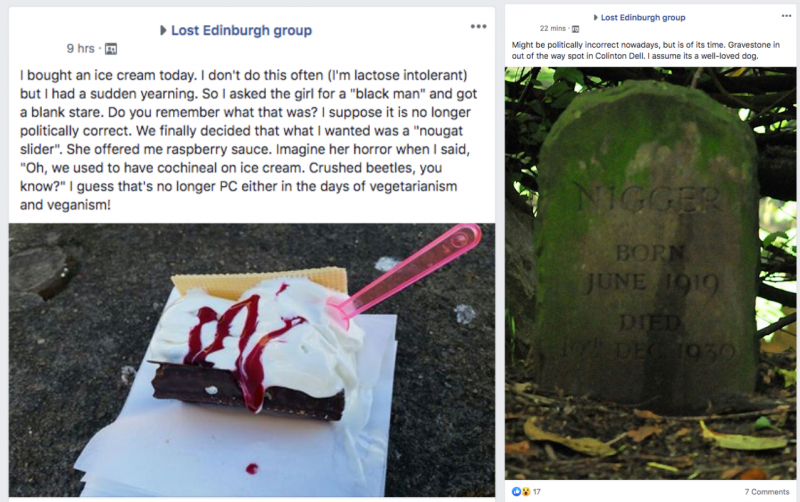 As it turns out, Lost Edinburgh is not alone. Many other history Facebook groups such as Lost Glasgow, Manchester History, and Birmingham History & Other Stuff, carry similarly problematic content. Members regularly share posts that are clearly offensive to minorities. And although moderators of the groups are in some cases swift in removing offensive content, many have become a mausoleum for racist language, commemorating deeply offensive traditions and terms that have, at least in public, mostly been lost to time.

Focused on nostalgia, and with the average group member being a middle-aged white person, there are many posts yearning for the “good old days” before the “PC [politically correct] brigade” ruined once-loved traditions. Nostalgia and history are used as a veil for sharing deeply racist language and imagery – as well as claiming that beloved locations are being run down by immigration.

A common example of the latter surfaced in the Facebook group Manchester History (20K members). A member shared an image of a deconsecrated church, which had been turned into a school for special needs children. The aim of the post was to appreciate the church’s architecture, built in the 19th century, taken in the spring light. However, the top comments on the post had nothing to do with the church, its history, or its current use. They were people fearing that the church would soon be turned into a mosque – an entirely baseless claim. 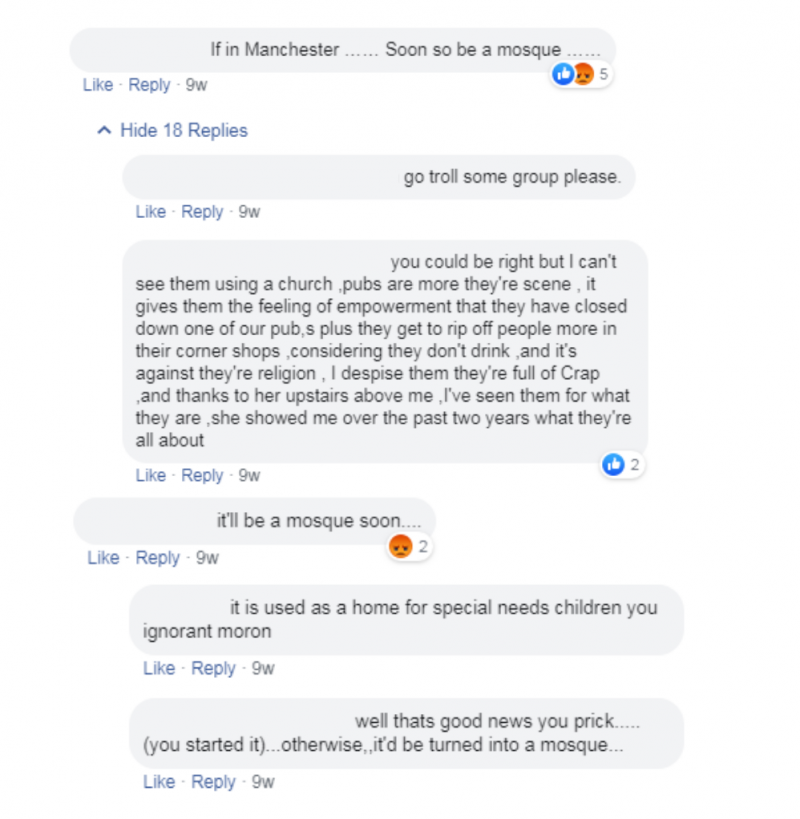 While some comments on the post were purely concerned hand-wringing over the potential of it being turned into a mosque, those comments then became a general springboard for more general anti-Muslim sentiment. One user, who didn’t even think the church would be turned into a mosque, posted “I despise them”, “they’re full of Crap [sic]”, and “I’ve seen them for what they are”.

Even more common are deeply racist ephemera and stories from earlier decades, such as racist advertising from earlier parts of the 20th century. One popular among the Lost Glasgow’s 23K members is old advertising for Barr’s Irn Bru – which previously used a cartoon of a stereotyped black boy serving a glass bottle of “iron brew” on a platter, as a mascot. The ad is regularly shared to Lost Glasgow’s Facebook group and the top comments are predominantly complaints about the cartoon being censored, lamenting that billboards of the ad are just “one more landmark that is gone”. 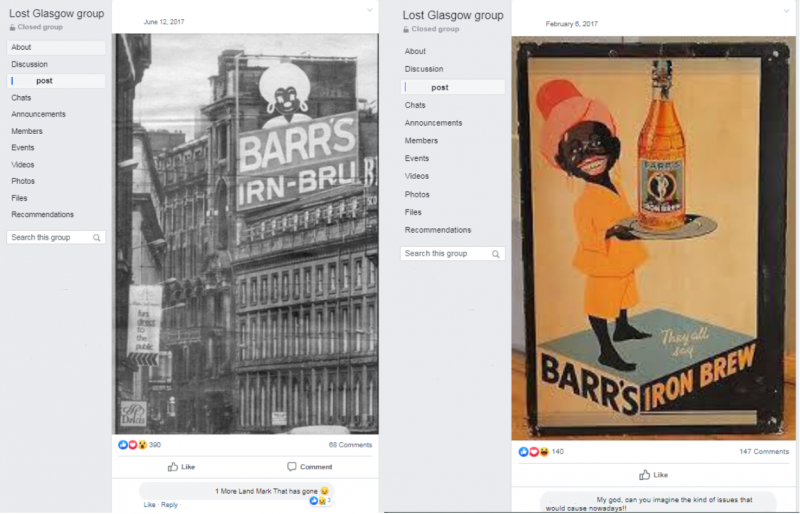 Posts to these groups often complain that people can no longer use certain forms of language, or specific bits of slang, because they are deemed racist. One such common post in the Lost Edinburgh group (32K members) is about a type of ice cream that was once called a “black man”. Defined by the Dictionary of Scots Language as an ice cream sandwich consisting of two chocolate wafers on the outside of a vanilla centre, this term was popular in the Sixties and Seventies, but fell out of use for its obvious racism. This hasn’t stopped members of Lost Edinburgh for complaining about not being able to say it.

“I asked the girl for a ‘black man’ and got a blank stare,” one user posted in May (a screenshot is available in the first picture in this article). “I suppose it is no longer politically correct.”

Others in the group have explicitly posted saying that the term is not racist, and debate about it appears on a near-monthly basis in the group. 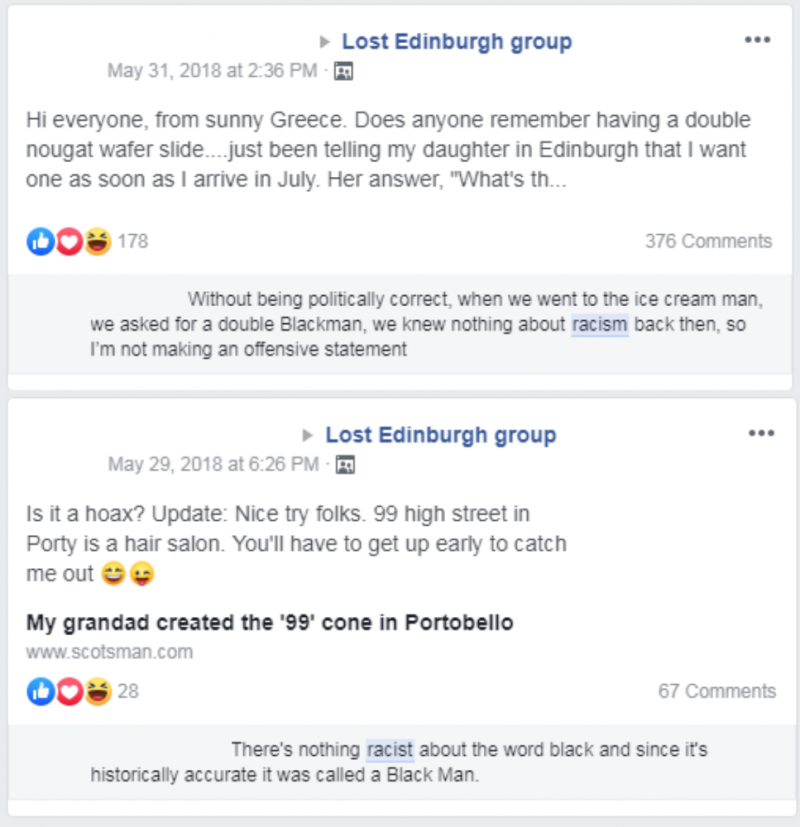 Other posts in these groups are slightly less clear cut, free of a slur or a racist slang term or people arguing directly about race in the comments. This can take the form of simply questioning the mere idea of non-white people occupying historical spaces in their city, or questioning the safety of white people in particular areas of these cities during historical eras.

An obvious example came from the Manchester History group. A picture was shared in September of a policeman holding hands with two young children, reportedly taken in 1938. While this is entirely common content in these groups, the policeman’s racial identity appeared ambiguous to users.

“He looks a big bugger” another user chipped in.

“Please don’t take this as racist,” wrote one, “But did we even have black policeman back then?”

It’s important to note that, these comments and posts often get hundreds of likes – regularly coupled with hundreds of comments repeating the racist sentiment or slur from the original post. In one from Lost Glasgow, members comment positively on an old school rhyme that uses the word “piccaninnies”. The post received 60 comments, almost all joyfully remembering the racist rhyme, and received 116 positive Facebook reactions. 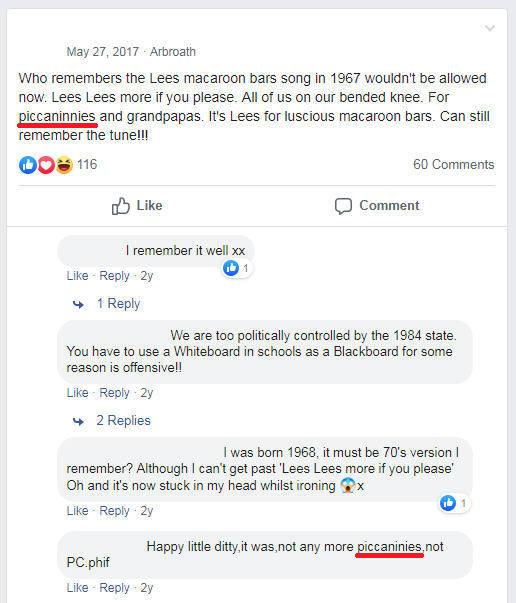 Some of these history groups are better moderated than others. Posts from administrators (the people who run the group) in the Birmingham History & Other Stuff Facebook group (10.5K members) suggest it was once rife with racist content, but that, since the content has been flagged it has been removed. Admins also regularly post in the group asking for people’s opinions, adding the caveat “extreme or racist remarks will be removed”.

However, this does not spare the group from regular problematic posts, and it would appear that they are still often missed by moderators. One obvious offender was a post from September in which a member posted an image that gave “the history of the Golliwog”.

“A bit of history here for you that shows the term was never intended to be racist,” reads the post that has, at the time of writing, just shy of 200 positive reactions.

The vast majority of the comments either agree that PC outrage at the term is unjustified, speak about how much they “loved their golly” as children, or both. Few comments argue with the original poster’s claim that golliwogs are not, indeed, racist.

“They are never [seen as] racist to kids, only adults” one user posted. Another wrote “Let’s hope common sense prevails. Nice one”. 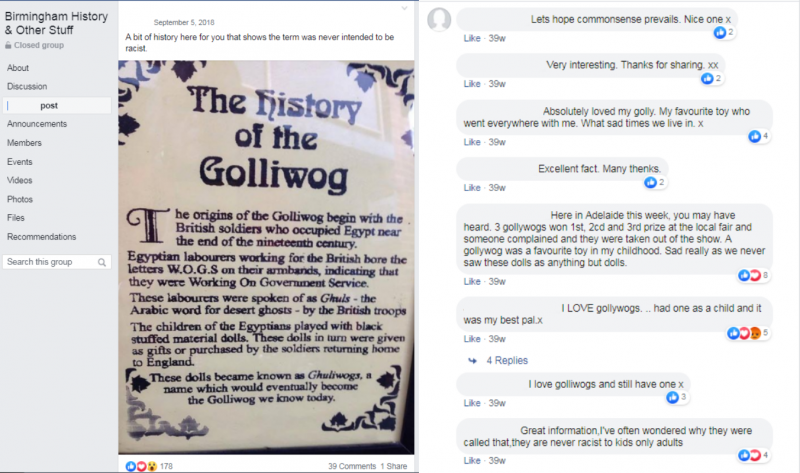 But beyond racist posts related to history, these groups also get random racist posts only loosely linked to the group’s theme. Earlier this year in Lost Edinburgh, one member posted complaining about tourist shops crowding the city’s historic High Street, the Royal Mile. Commenters quickly jumped on the post as a way to complain about Chinese tourists, about Asian-owned shops, and to say that only “native Scots” should be allowed to stay in the city. Another post in Lost Edinburgh spoke about one of the city’s more well-known streets, Gorgie Road, and how it “used to be”. The post was flooded with complaints about how overrun the area has become with immigrants and immigrant-owned shops.

I reached out to admins on all of the groups mentioned in this piece to ask how they handled these types of posts. Only Norry Wilson, an admin for the Lost Edinburgh and Lost Glasgow Facebook groups, got back to me. He acknowledged that racist posts are a problem.

“We do get the very occasional racist or bigoted comment, and, when we do, the offender is firmly kicked off the site – blocked and barred,” he says. “That said – with over 400k followers across our various groups and sites – I very rarely have to do that.”

Despite the efforts of moderators, racist posts slip through the cracks on all these groups. And this has been happening for years. A cursory search of Lost Edinburgh pulled up an image from as far back as March 2017, showing a group of white school children, half of whom are in blackface. The post garnered 66 reactions (a combination of likes, loves, and laughing faces) and 49 comments, most of which were remarking that they, too, had worn blackface as children and complaints about the inability to don blackface today. 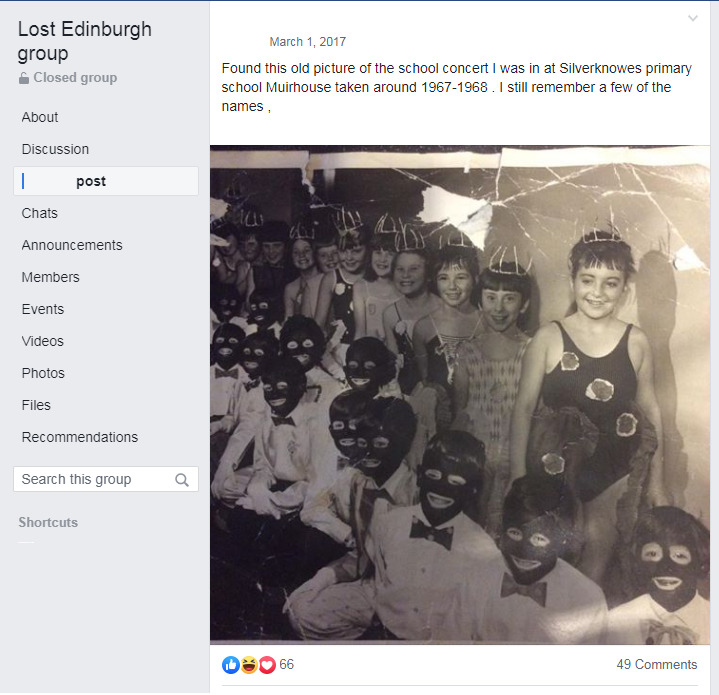 Racists will jump on most opportunities to be racist, and history is an open springboard. Nostalgia and ephemera provide an opportunity to say racist things under the guise of “that’s just how it was back then! I’m not saying it’s how things should be now!”

A more aggressive approach to moderation could help ease the problem. But for the moment, these historical groups are home to a disturbing level of offensively outdated material.