“Men shouldn’t allow dogs into their house,” one user wrote. “Be wary of women and dogs”, wrote another. “Dogs are naturally gifted at licking ‘nether regions.’ I wish I was joking,” wrote one. “With women that have dogs, just check how often they have male dogs. It’s not a coincidence” wrote another.

These posts are from forums across Reddit, shared on predominantly men’s rights spaces. They represent a barely veiled and long-standing idea that has driven men to vilify women’s sexual freedom, based on little to no case studies or information. Despite this lack of evidence, the idea has maintained its hold on these communities for years, and is now beginning to creep into the mainstream.

This theory is “dogpilling”: the widespread internet-driven idea that women have sex with dogs more than they do with men. The name is from the idea that you have “taken the dogpill or you haven’t”: the notion that those who have been exposed to and believe the theory are the ones who have taken the pill that makes them see the truth. Dogpill-believers claim that their theory is supported because “there are more internet forum threads with women describing sexual attraction to their own dogs than there are websites with women describing their attraction towards male virgins.”

Common posts arguing for the veracity of the dogpill

To understand this phenomenon you have to also understand two major online movements; the first of which is MGTOWs – Men Going Their Own Way.

This online community has existed for nearly two decades, born out of the pick-up artist spaces of the early Noughties and formed of men who feel that feminism and the women’s rights movement have ruined heterosexual relationships. Most of these men report having had some bad experiences with women, predominantly romantic rejection. In response, these men have chosen to “go their own way”, leading a life without any romantic involvement with women and, in some cases, no involvement with any women at all.

The second and perhaps more mainstream of the two movements, is the incel movement. Incel is short for “involuntary celibate” – men who believe that women are refusing to have sex with them. Incel ideology also purports that women who are sexually active are “whores” and “sluts”, demonising women who have pre-marital sex and congratulating women who don’t. Incels have made headlines over the last several years, largely when linked to terrorist attacks: both Elliot Rodger and Alek Minassian were self-proclaimed incels and are often heralded by men in the incel community.

There are many intersections of these two movements. They are both predominantly filled with men, demonise women for being sexually active, and push narratives that say that sexually active women get a kick out of degrading and rejecting “good” men. Dogpilling, therefore, fits within the middle of this Venn diagram: purporting that women who are sexually active hate men and would consequently prefer to have sex with their dogs than the “good guys” they reject as a result.

“Ever since Sam told me about that shit while he was drunk, it totally changed my perspective of women who interact with dogs,” the user wrote.

On this same post, many people joined in to say they had heard similar stories. “I knew a girl in high school that did this shit… I think a lot of these girls now a days are fucking their dogs,” one user replied. “When man and male dog become interchangeable, society is fucked,” replied another.

In these posts, it’s very common for photos of specific women to be shared online with these unsubstantiated claims. Searches for “dogpill” on Reddit results in hundreds of pictures of women simply photographed with their dogs. Common replies to these pictures read are resentful and aggressive: “Those same women would never fuck a subhuman incel. Those dogs have actually got more pussy than us.” 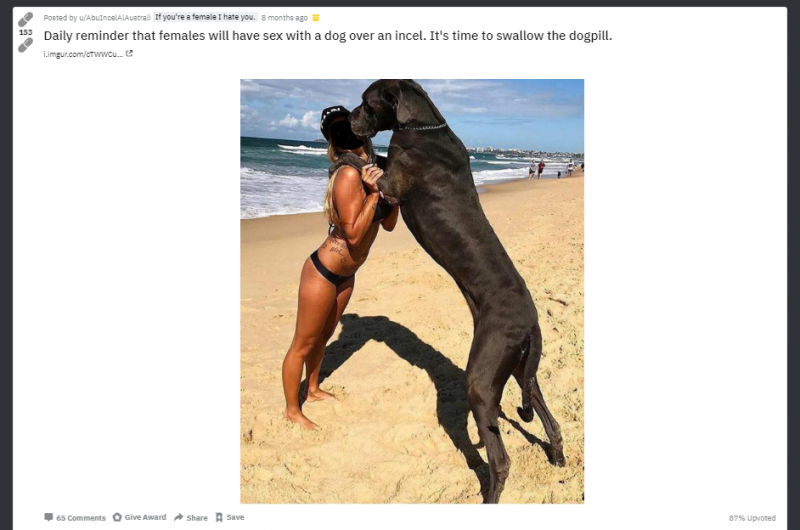 Mark (not his real name) is a moderator of Reddit’s r/IncelTears, a forum dedicated to mocking incels’ posts online, which has over 200,000 subscribers. The posts on r/IncelTears are screenshots of content from all corners of the incel internet – posts about hating women, tips for avoiding “sluts” and “whores”, images in stories incels claim support their theories about the evils of sexual women. Many of them come from the now quarantined Reddit forum r/Braincels, which was a hub of violent and misogynistic language that, while closed to fresh posts and so frozen in time, can still be accessed.

He tells me that dogpilling is an incredibly regular topic of conversation among the incels he’s exposed to. “I see a post about the dogpill maybe every few days,” he says. “It’s not as common as some of their other themes, but it’s certainly brought up every time a woman posts a picture with a dog.”

Although the dogpill’s origins are murky, Mark believes it nestled in perfectly with the wider men’s backlash against female sexual liberation. “I think it evolved from the idea that women like ‘big strong alpha males’ and that women don’t care about anything as long as you’re tall and protective,” he tells me. “Then it evolved into incels believing that women don’t even care if their mate is human as long as he meets that criteria.

“Plus certain trolls constantly post articles about very rare separate incidents of women sexually abusing their dogs, so other incels fall for the propaganda.”

Wisconsin’s face is now plastered all over forums on Reddit, 4chan, and 8chan near daily. She is the topic of hundreds of YouTube videos arguing that the dogpill is real, racking up millions of views. Misinformation about Wisconsin moves rapidly in these spaces too, with hundreds of posts claiming that Wisconsin went to prison for murdering dogs, when in reality she was arrested for making pornographic films while underage. Despite that, Wisconsin’s video has become a foundational citation in dogpilling arguments, where she is most commonly known as “the dogfucker”. 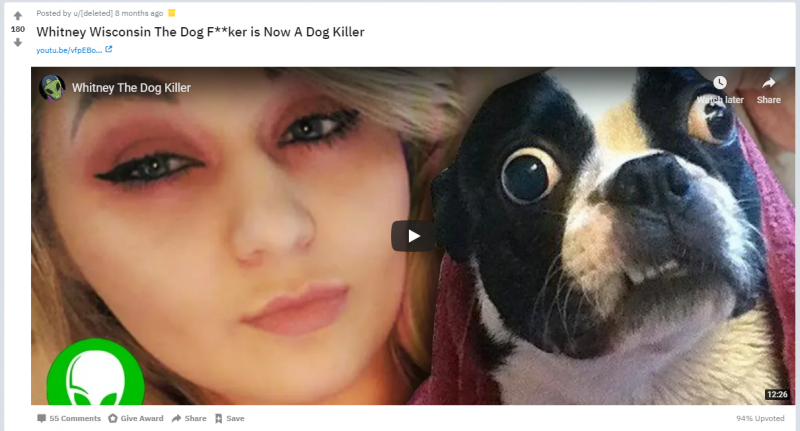 Misinformation about “Whitney Wisconsin” helps support the dogpill cause

When I ask Mark what he thinks the long term implications of dogpilling is, he says we are already seeing the negative effects of “incel theories”. Citing Alek Minassian and Elliot Rodger, he says that the ideas pushed in incel spaces have already led to extreme violence; our conversation happened before the meme-laden video and document connected to the Christchurch shooting. With dogpilling specifically, Mark hypothesises that we will likely see “more dehumanisation of women, painting them as sex crazed beasts [that won’t have sex with incels] until the incels themselves start acting like dogs”.

“I think most of the people who post on these forums are bored socially awkward boys who get fun from hate and don’t actually believe what they are saying,” he says. “But I also believe there is a small group of mentally ill men who don’t realise it’s all one giant troll and get radicalised by the community.”