Imagine following someone on Instagram, stalking their posts, watching their daily routine through their stories, feeling almost like you almost know them – and then finding out they’re an entirely different race to the one they appear as in their photos.

Among the latest trends on Instagram is this: white women deliberately wearing darker make-up and retouching and filtering their pictures in attempts to look Asian or black. Screenshots of the online phenomenon were shared by Twitter user WannasWorld, sparking a debate over white women capitalising from racial ambiguity for financial gain. 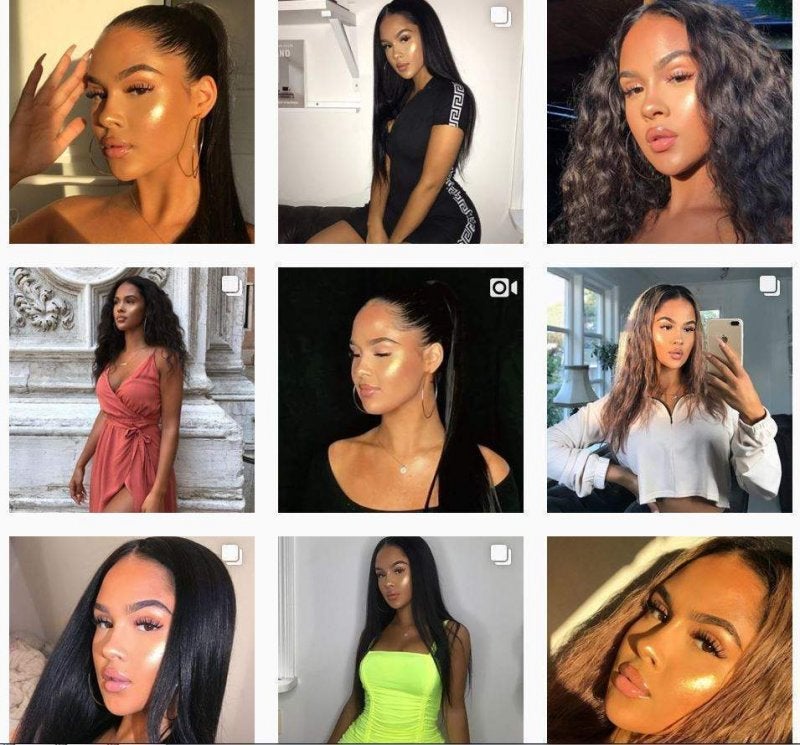 Model Emma Hallberg is among those Instagram users. In the images she shares with her 188,000 followers, she appears to have a darker skin tone and tight curly hair, and could easily be pass as black or mixed-race. Hallberg receives no less than 30,000 likes for almost every picture she posts on the platform and is a brand ambassador for clothing company Fashion Nova.

In a private message between the 19-year-old and another Instagram user that has since been made public, Hallberg confirmed she is in fact white and that her skin gets “very easily tanned”. She stated that the before and after pictures circulating on Twitter are just “two different pictures taken on different seasons of the year” and denied that she was posing as a person of colour. 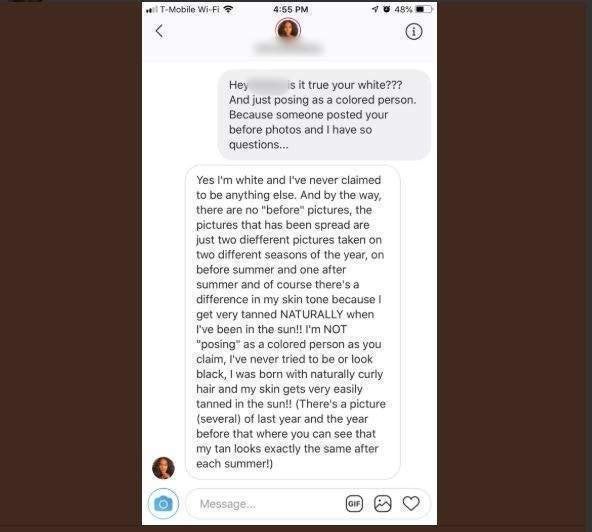 The trend, which has been heavily criticised given the long history of objectification and exploitation of black women, has been blamed by some on the Kardashians.

Yeboah told the New Statesman that it is almost “fetishistic in that they want to achieve this ‘exotic’ look in order to attract black men. It seems like it’s all it is”.

The Kardashian family have long been at the forefront of the argument around appropriation. For years Kim Kardashian has been accused of appropriating hairstyles usually worn by black women, despite her claims that she’s “not trying to disrespect anyone’s culture by wearing braids”.

In July, Kim received heavy criticism on social media when she shared photos of herself wearing fulani-style braids at the MTV Movie and TV awards. The choice of hairstyle, which originates from Africa, was made worse by the caption, which simply read, “Bo West” – referring to white actress Bo Derek, who wore such braids in the 1979 film, 10.

In the same week, Kim spoke about the backlash on a panel at BeautyCon LA, stating, “I’ve definitely had my fair share of backlash when I’ve worn braids. I’ve been fortunate to be able to travel around the world and see so many different cultures that have so many different beauty trends.”

Her younger sisters Kylie and Khloe have faced similar criticism. In 2014, Khloe was accused of appropriating her designs for her denim brand Good American from a black woman. She called the accusations defamatory and threatened legal action. One year later, Hunger Games actress Amandla Stenberg called out Kylie for wearing cornrows in an Instagram post, saying “when you appropriate black features and culture but fail to use your power to help black Americans by directing attention towards your wigs instead of police brutality or racism”.

Despite their critics, Kim, Kylie and Khloe continue to profit from the commodification of black women’s bodies, language and mannerism. Kylie’s cosmetic label Kylie Cosmetics has sold more than $630m (490m) worth of make up since it launched in 2016. It became a discussion on the American TV talk show The View, with one of the hosts Sunny Hostin, saying: “Kylie made her fortune from using lip fillers and sort of combined that with the lip kits because she had the big lips. Is it cultural appropiation? Is Kris Jenner this evil genius that understands being close to black culture can make you money, but being black cannot.”

But the sisters are not the only stars accused of doing so; rapper Iggy Azalea also often comes under fire for her urban lyrics and image.

In an interview with GQ magazine, the 27-year-old, born Amethyst Kelly in Australia, defended her image, saying: “I’ve been in America since I was 16, I’m about to be 28. America is going to have an influence on me. I live in this country with everybody else. I’m supposed to live here for almost half my life and not be influenced by it? If I’m influenced by it, it’s somehow inauthentic or an act? This is my life.”

As the Instagram trend shows, though, it is not just celebrities who are tempted to appropriate black culture. Nor is it confined to social media: Rachel Dolezal, a white woman with no known black ancestry, made headlines in 2015 for identifying as black, even being made a branch president for the National Association for the Advancement of Colored People, an American civil rights movement. In 2016, she changed her name to Nkechi Diallo and illegally received $8,847 (£6,600) in public assistance funds.

In May, beauty blogger Nikita Dragun was criticised online after posting a photo on Instagram wearing a bright pink dreadlocks wig. She responded to the backlash on Twitter, stating “my culture is more than just a hairstyle”.

As blogger Arielle the Lion writes, “throughout history in America, white people have shamed people of African ancestry for their looks, hair and body, and have often said those features are ‘undesirable’.” And yet, when they seek to gain, it seems quite the opposite is true.

Ultimately, at a time when racist incidents are on the rise in both the US and Europe, there may be some truth to what social activist Brittany Packnett stated in her tweets a while back, that some white people love black culture enough to copy it, but sadly they don’t love black people.