I’m a nerd, who was a kid in the Nineties, and consequently I was raised on diet of TV space opera with aliens battling away at each other somewhere in the stars. If my childhood self ever had a vision of humanity’s long term future, it was this one.

This, though, has become yet another casualty of the disillusionment of adult life. The laws of physics make it depressingly unlikely that humanity ever could make it to the stars; and there’s no evidence to suggest that there’d be anyone up there to meet us, even if we could.

And then in 2016, Professor Brian Cox said something that’s been bothering me ever since. “One solution to the Fermi paradox,” the world’s most beautiful physicist told the Sunday Times, “is that it is not possible to run a world that has the power to destroy itself, and that needs global collaborative solutions to prevent that.”

That comment takes some unpacking, and time, like speed, is limited, so let’s get to it. The Fermi Paradox, named for physicist Enrico Fermi, concerns that contradiction between the apparent likelihood of advanced life evolving elsewhere in the universe and the complete absence of radio signals that might suggest that it has. It can be summed up in three words: “Where is everybody?”

In 2014, Cox and a colleague, Andrew Cohen, published Human Universe – a lovely book which, despite being a TV tie-in, gave me that sense of wonder at the universe and our place within it that I half-remembered from the science books I read as a kid. (Honestly, get the audio version and let Sam West read it to you. I promise you won’t regret it.) One chapter of the book concerns the Drake Equation, Frank Drake’s 1961 attempt to put some numbers on the probability of finding another intelligent civilisation elsewhere in our galaxy. 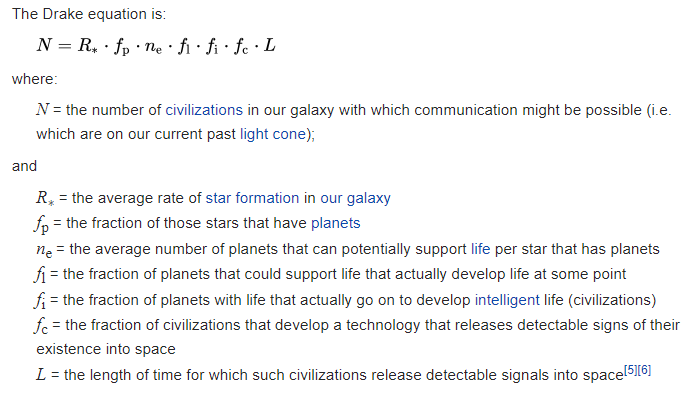 The Drake Equation, as explained on Wikipedia.

The probabilities assigned to most factors in the equation have, in Cox and Cohen’s telling, increased since Drake first came up with the equation: there are more exoplanets than we thought; the chances of life beginning seems to be higher; and so on. Alien life, on other words, seems more probable than it did in 1961.

So, again – where is everyone?

Cox has offered two possible solutions to the paradox. The more comforting one is that, while simple life may happen relatively easily, complex life was essentially a fluke. The merger of multiple cells from which that resulted seems to have been one off here on Earth: perhaps it simply hasn’t happened again.

Maybe. But the other solution to the paradox is the one Cox alluded to in 2016, and it’s this one that, not to overload you with science, scares the living shit out of me. In this theory, it’s the last factor in Drake’s Equation – the lifetime of an advanced civilisation – that’s the key one. Perhaps technological civilisations just don’t last very long.

Perhaps life has a tendency to destroy itself.

There is a darkly compelling logic to this idea. (From here on, incidentally, I’m no longer just garbling things I’ve read elsewhere, but speculating on my own account.) Advanced civilisation is, after all, the result of competition. Just as competition between lifeforms powers evolution, so competition between peoples and nations drove technological advancement: better agriculture, better communications, better energy sources. The competition for land and resources has been responsible for countless atrocities down the centuries – but it’s also driven us forward. Even the medium on which you are reading these words has its origins in the work of a US defence agency.

What’s bothering me is the suspicion that, after four billion years of serving life well, the competitive impulse has become the biggest threat to our survival. The side effects of our advanced civilisation include the depletion of the Earth’s natural resources, vast quantities of planet-boiling pollution and weapons destructive enough to wipe out life on Earth – each the result of unchecked competition. We could, in theory, work together to deal with these problems: agree to emit less carbon, or protect the environment, or ban the bomb. But what if, in practice, we can’t, because we’ve spent four billion years learning to outcompete each other? What if there’s always a marginal, momentary advantage to refusing to collaborate – and that, sooner or later, someone somewhere will think it’s an advantage worth having?

I really don’t want to be right about this, for obvious reasons. But as I look at the world in 2018, with the effects of global warming starting to become visible, and selfishness and fear the most powerful forces in politics, I’m not feeling optimistic.

Perhaps humanity will never go to the stars, for reasons that have nothing to do with quite how far away they really are. Perhaps it’s just that, the longer a civilisation with planet-killing abilities exists, the closer the odds of it using those abilities get to 1.