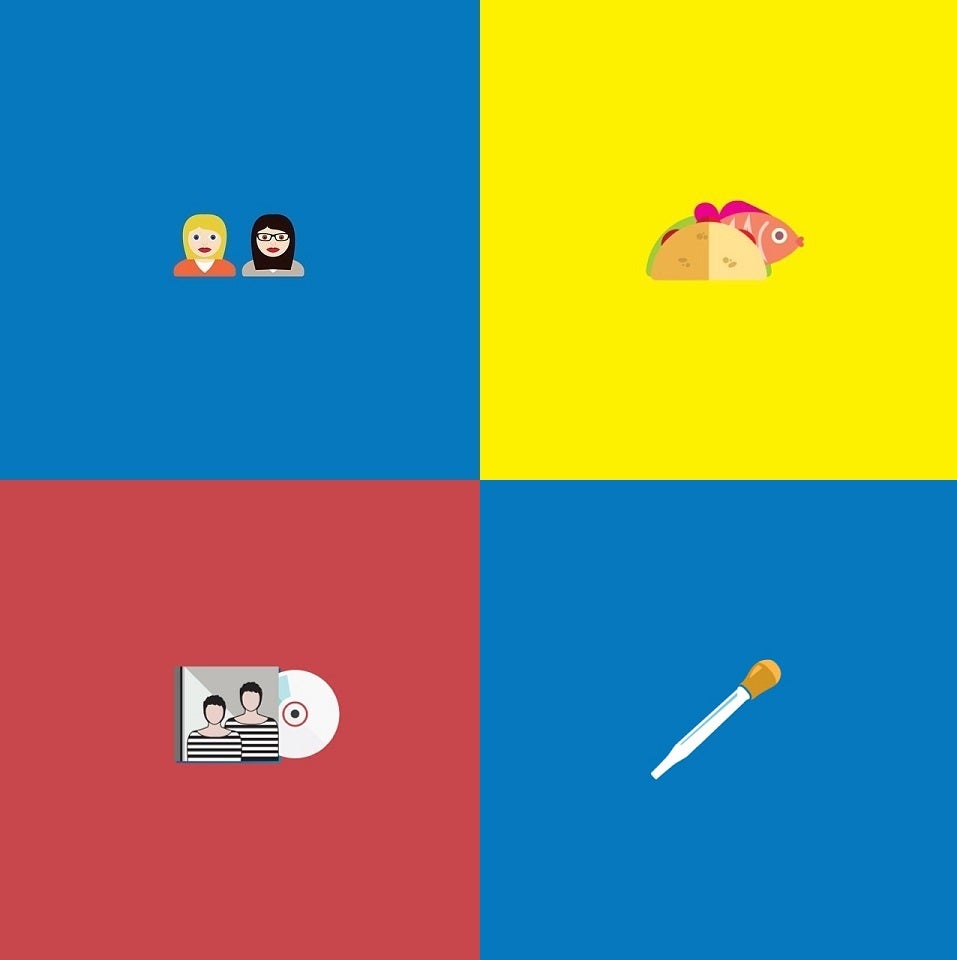 If you’re in the middle of writing an earnest blog post about lesbian invisibility, stop this second. If you’re at a protest against lesbophobia, a fundraiser for lesbians with allergies, or a dyke march, go home now. After a struggle that can be traced back millennia, to Sappho’s fight for her right to mournfully finger women on an island, the battle is finally over. And ladies, we won. We’ve done it, lesbians, we’ve penetrated the realm of emojis.

Emojis, of course, are those tiny pictures of things you send to people in texts/WhatsApp messages, etc when you’re feeling intimidated by the richness and depth of language, and are looking to outsource your creativity. “I’m facing a level of existential doubt and dissatisfaction heretofore unbeknownst to mankind. Words fail me; here’s a little tractor instead.”

These new guys on the emoji scene include Piper and Alex from Orange Is The New Black, a fish taco (for the love of God), and a Tegan and Sara album. This unprecedented projection of lesbian iconography on to the screen of digital communication is sure to change the medium forever.  I mean, I’ve lost count of the number of times my emotions could only be expressed by a graphical representation of a turkey baster, and now I can do exactly that. It’s overwhelming to think that, up until so recently, I’d have to settle for the words, “I’m feeling turkey baster-y.”

Snark aside though, queer women should never be invisible. And I doff my trucker hat to Katie Streeter and Kimberly Linn, the designers behind the lesbian emojis. Streeter and Linn simply saw a place in which lesbians weren’t represented and went about filling it with famously dykey things. Having said that, I wasn’t immediately sure what their unicorn emoji represented, and weird shit happens when you Google “Lesbian unicorn”.

But anyway, where to go from here? Now that we can get married, be on TV and text one another miniscule pictures of innuendo-drenched Mexican delicacies, what could possibly be next for lesbian visibility? You so rarely see any lesbian neo-Nazis so, yet again, we fall behind gay men there. But maybe, for once, that’s a good thing. What about breakfast cereal though? Count to three and a lesbian, somewhere, has just finished a bowl of Alpen. But what’s on the box? Mountains. Great lumbering, bland mountains. It’s probably about time that Coco, the Coco Pops monkey (who everyone thinks is a bloke, for some reason), came out as a lesbian too.

I’m actually quite chuffed that I can now electronically emote in Lesbianese. It’s almost like Polari, the original slang of gay subculture, getting a 21st-century makeover. Next we’ll be 3D printing strap-ons and plonking a statue of Sue Perkins peering into an oven on Mars. But back to the present. I don’t think there’s any doubt that the BuzzFeed Age is the best time there’s ever been to be a lesbian.