“[PUAHate] confirmed many of the theories I had about how wicked and degenerate women really are.”

[12:40 PM]: date rape is the behavior of masculine blacks, and very alpha

[12:41 PM]: who is gonna be the next elliot rodger on this chat? i nominate greg

– An extract from a chatroom conversation between members of the now-closed PUAHate forum, as transcribed by Jezebel’s Erin Gloria Ryan

Elliot Rodger, the Isla Vista shooter, was a member of the PUAHate forum. It was nominally a place for those who felt conned by the pick-up artist promise, and many of its members were rightfully suspicious of what they had come to see as snake oil. Yet PUAHate.com is now a dead link because many of its members reacted the other way – they blamed the women for not doing as they should, instead of the broken models of human interaction that they paid money for. They blamed women with a bile that gave Elliot Rodger a sense of belonging.

A “perfect gentleman”, Rodger was driven by an immense sense of entitlement, and yet the surprising thing about his women-hating autobiographical manifesto is how little time he ever spends with any of them. Again and again he sets out to find a girlfriend by going to a local mall or park, sitting on a bench, and waiting. Apart from the female counsellor his parents pay to spend an afternoon with him, he never has a full conversation with a woman; he goes to a party, and stands in the corner, waiting for someone to talk to him first. His expectation was such that he felt his designer clothes, his BMW, even his bone structure marked him out as “a descendent of British aristocracy”, a person who women should be uncontrollably attracted to for his obvious social value. He was, as he described himself in his final video, “the superior one, the true alpha male”, and every woman in the world was thus in violation of his natural rights for ignoring him.

This attitude might seem alien to pick-up artists – by now, a recognisable pop culture stereotype, the subject of reality TV shows and bestselling books – and to those inside the community it might seem unfair to link them to a mass shooter. Pick-up artists, after all, are all about structuring as many opportunities to meet and seduce women as possible, in every kind of possible social situation. Yet it’s not a coincidence that PUAHate was the first and only place where Rodger felt as if he was among people capable of understanding him.

Pick-up artists sell an ideology about women, and an odd one at that – cod evolutionary psychology and pop anthropology mashed together into a kind of brute forced seduction, or a quantified romance that approaches women like mechanical devices that can be debugged and reprogrammed. It takes the phrase “press her buttons” too literally, and assumes there’s a de facto biological Konami code that any man can use on any woman. Not for nothing has Neil Strauss, author of The Game, called it “the revenge of the nerds”.

(Arthur Chu’s “Your Princess Is In Another Castle” is also good at expanding on the nerd-romance trope of women as characters to be “won” by a determined hero, rather than being autonomous beings both capable of choice and deserving of respect.)

If you want to buy into this ideology, you can, for example, pay Erik von Markovik of Venusian Arts (better known as “Mystery”, perhaps the founding father of the modern industry) for literature, classes and boot camps that explore his patented Mystery Method. It uses something called the “M3 Model” of seduction: 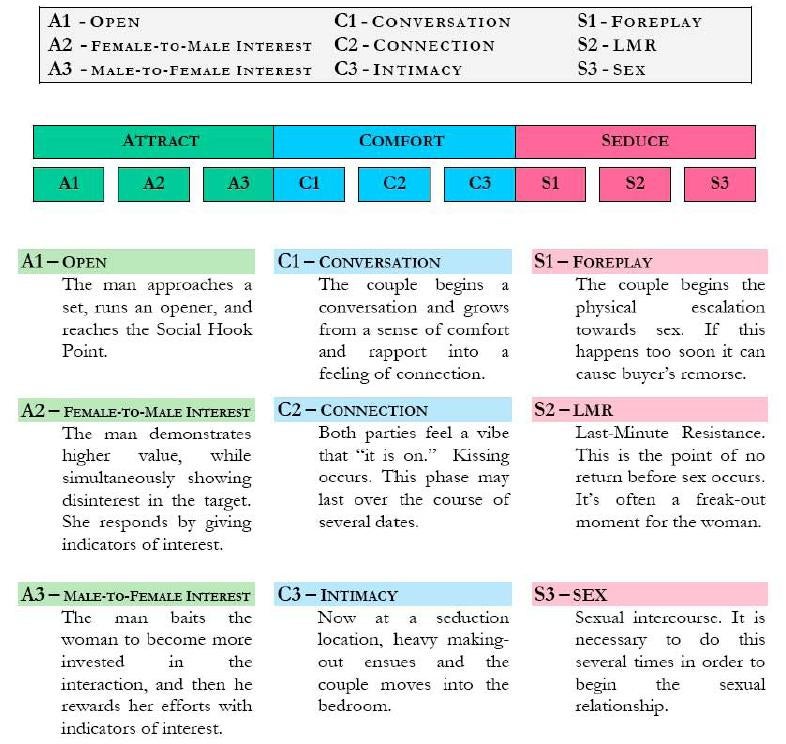 Each step, broken down into further constituent steps, is designed to ease a woman into the idea of sleeping with a man she’s just met. (And I hope I’m not the only one appalled by the implicit threat in the penultimate step: “last-minute resistance”.) This is what is known in the business as “structured game”, though even proponents of the more improvisational “natural game” accept the need for some adherence to an overarching methodical narrative, some combination of attract/comfort/seduce.

The sine qua non of this narrative, or ideology, is “social hierarchy”. Much of it is framed by the idea of becoming the “alpha” within a group, or at least of understanding the hierarchy of a social situation enough to make sure that a man is valued enough to be a potential mate, literally by “demonstrating value“. A PUA proceeds through his routine with the aim of ascending the hierarchy, which in turn inevitably gives a go-ahead for using further seduction routines.

As “encyclopaedia for pick-up artists” PUALingo.com describes it:

In animal hierarchies, the Alpha Male is the most dominant, and typically the physically strongest member of the group. For example, in wolf packs, the “alpha wolf” is the strongest member of the pack, and is the leader of the group. This position of leadership is often achieved by killing or defeating the previous Alpha Male in combat. Alpha wolves have first access to food as well as mating privileges with the females of the pack.

Social status among human social groups is less rigidly defined than in the animal kingdom, but there are some recognizable parallels. Although people don’t often engage in physical violence to achieve dominance, there are still recognizable leaders in different fields who have wide access to material resources and women.

Here’s Mystery laying out the same concept in one of his many, many training videos:

The apes are still living that way. They have complex social hierarchies, and so do we. If you can systematically demonstrate those three characteristics – again, they are leader of men, pre-selected by women, protector of loved ones – if you can convey and systematically demonstrate those characteristics, you will be the tribal leader. A woman’s brain is designed to align with the tribal leader of her community. Why? Because it improves her chances of survival and replication dramatically. She doesn’t even have to be with the tribal leader, she just has to hook up with one of his friends.”

What makes someone alpha depends upon who is asked, but the rule of thumb seems to be it’s related to whatever constitutes mainstream, attractive heterosexual masculinity in Western society: standing up straight, wearing clean clothes, no spitting, presenting as physically and emotionally “normal”. It’s not necessarily about being physically strongest or smartest, but being strong or smart enough to usurp a rival’s position or to make oneself the only attractive option in the club. All the other stuff – the negging, the manipulation, the codification of body language into categories like “bitch shield” or “indicator of interest” – is built upon this idea.

This is an error of pseudoscience, as much a cousin of skull shape determining personality as it is an unloved child of the neoliberal doctrine of rational self-interest. It’s dangerous, too. It bleeds into the wider “men’s rights movement”, and to places like reddit’s nightmarish r/theredpill sub, where terms like alpha are a bedrock of the lingo and women are seen (without apparent awareness of the contradiction) as both intentionally disrespectful of men and witless automatons in thrall to their genetic programming. Women who deny men their due are feminists, and they must be feminists not because they value themselves but because they’re broken, and hate men. It’s a catch-all justification that reframes any female action that isn’t male-centred as morally wrong: women are bitches, because they are.

It’s a mess, of course. At its root is the idea that the hunter-gatherer societies that existed before the Agricultural Revolution reflect our primitive, and undeniable, nature. That the mating rituals of 200,000 years ago are still there, in our bones.

There is, though, no rule for ape social structure. Gorillas live in troops of around a dozen individuals with a clearly-defined male leader, who earns his position based on strength. Chimpanzees have larger communities of twenty or more individuals, each with a position in a hierarchy that is subject to a kind of ape politics. Orangutans live alone. Bonobo society is polygamous – they mate with each other near-indiscriminately, bonding with each other through both heterosexual and homosexual sex. Males get their social status from the status of their mothers, and some believe that bonobo society is matriarchal. They are capable of empathy and altruism.

In contrast, we can be reasonably sure that prehistoric human societies were non-hierarchical, egalitarian and cooperative, as are the majority of today’s hunter-gatherer societies that have survived, and that human nature still tends towards these instincts. They – and we’re not only talking homo sapiens here, but possibly also antecedents like homo erectus – are believed to have had strong ties beyond their bloodline, with individuals in a group caring for children who were not their own. Members of a society who were reproductively useless – such as women too old to bear more children – would have still been valued, as humanity was apparently not synonymous with reproduction or social status. Early art venerated the female, not male, form, and so matriarchal societies may have been common. As kinship was not the main motivation for cooperation, it meant language, technology and friendships spread within and between groups more easily. From computer modelling of social interaction, it appears that egalitarianism may be an inevitable consequence of human-level intelligence.

All of which is to say that if you’re going to do a dumb thing like resort to an is-ought fallacy to justify your sexism – should we start calling it scientific sexism, or is that too formal and dignified a label? – then at least get the first part right.

Research into what makes a human attractive is a bit strange, actually. Spraying yourself with a love phermone isn’t going to work, but there is some element of smell involved. There’s the aesthetics of body shape, and the degree to which intelligence plays a role. A model of the 1930s looks very different to a model of the 2010s – to say nothing of the myriad norms of gender and sexuality that exist in different communities around the world – so there must be something that shapes how we fancy people, but the nature/nurture interaction here is a foggy one. Weird Science‘s compliant superwoman is, I’m afraid to say, a fantasy.

(If we ever invent time travel, let’s use it for something productive: drop pick-up artists in 17th century London, 7th century Pyongyang, 8th century Caracol and 14th century Timbuktu, give them a phrasebook, and let them test what really works.)

Amateur pick-up artist meetings, where they can swap tips and tricks, are known as “lairs“. I’ve never been sure if it’s really tongue-in-cheek or not.