Britain is facing a demographic time bomb. The total fertility rate in England and Wales fell to 1.58 children per woman in 2020, the lowest since records began in 1938; the number of live births was down 15.9 per cent since 2012. The latest census data, released last week, represents a starkly ageing population: fewer children being born, balanced by large rises in the over-70 age bracket. And that trend looks set to continue, prompting some obvious questions about how to support this ageing demographic if there are so few children being born? How will our society fund its pensions, health and care costs when the number of young people (that is, potential taxpayers) is falling at such a dramatic rate?

All of which is to say that when commentators such as Paul Morland, the Oxford University demographer, warn in the Sunday Times of a “population winter” and demand radical ideas to combat this looming crisis, they have a point. Britain does need a long-term demographic plan that isn’t simply relying on immigration, or else our economy looks set to grind to a halt.

Why, given the existential importance of tackling this challenge, are Morland’s proposed solutions so frivolous, so small-scale and so divisive?

For those who have not read the article, recommendations include instituting a “national day” to celebrate parents (presumably in addition to the two we already have in March and June) and sending parents a telegram from the Queen on the birth of their third child, in the style of Soviet “Maternal Glory” awards. Some are more sensible (building more homes – it’s no coincidence that the average age of a first-time mother now coincides almost exactly with the average age of a first-time home-owner); others are frankly laughable (educating women that fertility reduces with age – as if we don’t already know that). 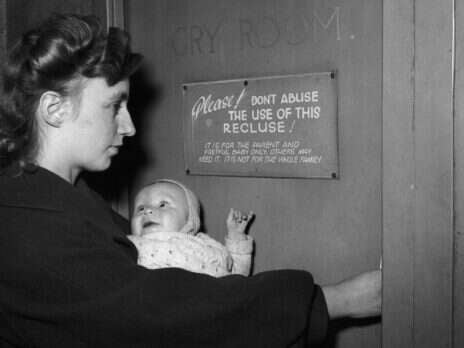 But even this pales next to Morland’s suggestion that we tax the childless (“introduce a ‘negative child benefit’”) to guilt-trip those who refuse to reproduce. This is the suggestion used in the headline – guaranteed to spark outrage and ensure his article gets as much attention as possible.

Many have pointed out the impracticality and downright cruelty of taxing people who are unable to have children. I would love to press Morland on how he thinks the bill for infertility should be presented to desperate, grieving couples – or whether he plans on making an exemption for step-parents and those who adopt or foster. But the more fundamental issue is that, had he only reframed his deliberately provocative proposal, his point would be spot on.

The notion that parents in the UK need help mitigating the extortionate cost of raising kids in this country is basic and compassionate common sense. The UK has the third-highest childcare costs in the developed world. A full-time nursery place for one child, paid out of taxed income, is more than the average mortgage. Parents (read: mothers) of young children are increasingly being priced out of the labour market, as the cost of childcare makes it unviable to go back to work. And those who are not yet parents, who are part of a generation that came of age in the wake of the financial crisis and saw financial stability pushed ever further out of reach as wages stagnate and home ownership becomes a distant dream, are considering their economic futures and wondering how on Earth children could possibly fit into it.

This toxic combination of low wages, soaring house prices and a broken childcare system is very much the result of successive government policies that have prioritised pandering to older generations over investing in the young. And there are things the government could do to help – from investing in nursery schemes to offering tax breaks to parents that balance the cost. It could also build more houses and reform the rental market so potential parents aren’t facing the misery of raising children in homes they could be kicked out of at any moment, or make parental leave far more generous for both mothers and fathers, and recognise that, if raising the next generation is so important for the stability of the nation, the costs should not be borne purely by individuals. That is what being a “pro-natal” society really means – supporting parents so that having a child doesn’t mean career suicide and financial devastation.

Morland doesn’t seem interested in any of that. While he cites Norway’s generous childcare provision, which enables mothers to work and supports fertility, tellingly this does not make it into his list of proposals. Instead, he boasts that his ideas are “all achievable at very little cost to the nation’s stretched finances”. But you can’t solve a problem that is primarily financial without spending money. And nor can you rally people to your cause – however vital it may be – by belittling, scolding and threatening to punish them.

To return to the issue of framing, here is another suggestion. Tax the childless at the same rate as everyone else is taxed, and invest more money in parents – whether through increasing nursery subsidies or expanding child benefit. Those who don’t have children would still be subsidising those who do, in the same way that we all pay for schools and roads and infrastructure we do not personally use for the sake of the public good. It would have the exact same impact as a tax on the childless, but with none of the division and judgement of pitting parents against non-parents.

The fact that Morland chose not to frame his proposal in this way reveals how he isn’t really interested in confronting the demographic crisis at all. Like the hand-wringers who purport that feminism or wokeness or climate anxiety is to blame for people not having children, he would rather be provocative than build consensus about a challenge that affects all of us. And perhaps it’s easier to turn the falling birth rate into a culture war than it is to confront the real reasons about why it is so low. But a note from the Queen won’t encourage more births – and nor will it pay for Morland’s pension when he retires.