From a sprawling listed building whose occupiers say they’ll pursue the city council to the European courts, to a poky night shelter run by rough sleepers for rough sleepers directly opposite the Town Hall, to the stately rococo Hippodrome Theatre, there are now half-a- dozen prominent squats open across the UK’s second-largest city Manchester.

Hundreds of people sleep rough in the city centre each night, and homelessness has increased at least tenfold since austerity was imposed back in 2010. The unstoppable force of punitive cuts to social housing is crashing into the immovable object of a runaway property market, leaving this slew of occupied spaces as the only option left for many of Manchester’s most vulnerable people.

The housing crisis in the city, one rough sleeper tells me, constitutes “class genocide”. As they frantically conjure up responses to a worsening humanitarian crisis, the squats I visited represent an ugly question for those in higher office who claim to be solving the problem. 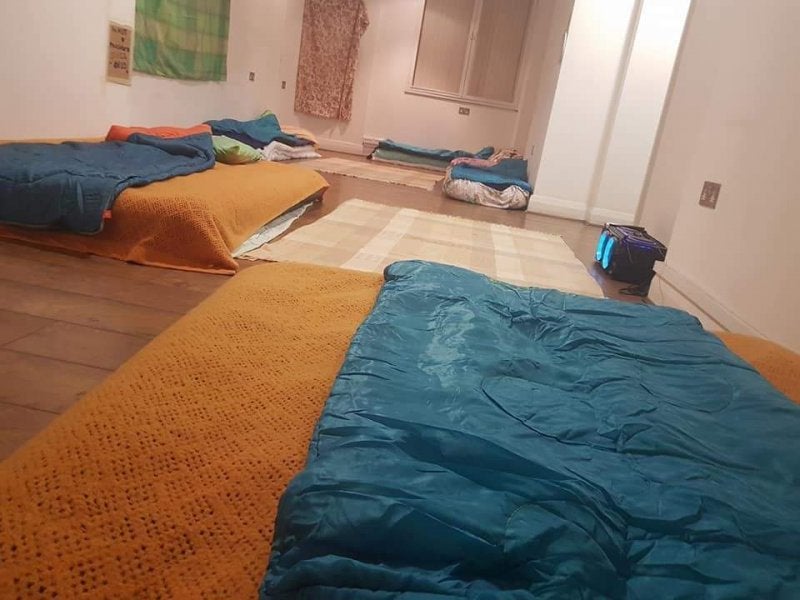 A pulley-powered fire escape descends like a drawbridge from above, and I clamber up into the spotless heart of Manchester’s only squatted “night shelter”.

“It feels so weird to be inside,” says long-haired new arrival Luke, wide-eyed, dropping his pack on a mattress. “This place is not at all like I expected it to be.”

I agree: I’ve visited occupied spaces in half-a-dozen countries, and this is by far the cleanest and calmest. In place of the usual graffiti tags, matronly home ornaments hang on the walls (“If you drop it, pick it up…”). Around thirty people sleep here each night, a mixture of semi-permanent residents and rough sleepers referring themselves via a wolf-whistle outside the bolted door.

Residents share desperate stories of stabbed heads and burned tents, crashing onto the street in a matter of days and becoming trapped there for years, churning in and out of the hostel system. Though young squatter Mike is in full-time work, he finds his mental health issues – and marijuana habit –  are accommodated here in a way they never were before.

“Without going into details, I suffered in a way that meant staying at home was no longer an option,” he tells me, vibrating with nervous energy as he rolls a smoke. “All you need to make a difference is time and energy, and Blaine has that, he gives himself to other people every second of every day…”

Blaine, who made headlines when he was thrown into Strangeways Prison following a peaceful protest on the roof of a previous occupied space, refers to the building as a “sanctuary” or a “home” more often than a “squat”. He is realistic as to what he can offer: “a chance to sit down, to rest and re-evaluate”, a breath between the crude violence of the street and the subtler violences of the housing market.

The contrast with the Wonder Inn squat, ten minutes down the road, is absolute. Where Blaine‘s focus is on immediate, practical support in a controlled environment, the Wonder Inn crew are vocal in their belief that squatting can change the world. The night shelter is over a Betfred: the Wonder Inn is a former “creative wellness centre” in a listed building. While Blaine’s crew cut their teeth in the homeless camps which mushroomed around the city in 2015-2016,  the Loose Space collective occupying the Wonder Inn coalesced during a high-profile occupation of a former cinema in the city centre which brought thousands through the door for arts events last summer.

Blaine is adamant that “squatting’s not a way of life,” that “drawing a fucking flower on the wall can’t change the world.” But Loose Space crew member Jamil Keats’s hyperactive jabber reverberates off high walls graffitied over with mushrooms and political slogans.

Loose Space want to “implant themselves in the forefront of the legislators’ attention,” shift the public, political and legislative narrative by throwing high-profile events like a Christmas Day meal for the homeless, and generally be a four-storey thorn in the Council’s side.

The boldest of their schemes is a plan to take Manchester City Council all the way to the European Court of Human Rights for their failure to provide for the homeless. On the record, Keats is cagey, unwilling to publicise his strategies anywhere the Council might read them, and his mile-a-minute babble slows as he speaks with care.

“What I can say is that we’re working together – activists, lawyers, and people with direct and immediate experience of homelessness – and we’re willing to sue the council in the highest court possible… a legal battle is unnecessary and unwanted, but immediate and effective action on behalf of the council seems unlikely.”

On a more immediate level, Keats hopes the new wave of squats could take on enough momentum to force the British government to reverse a 2012 law banning squatters from residential buildings, even those left derelict: “There are too many empty properties in the city centre, not earmarked for any use, just gathering value.” He also wants Manchester to follow the lead of other European cities like Copenhagen, where the municipality has reached an agreement to legalise a large squatting community known as Christiania, accepting them as part of the city’s fabric. 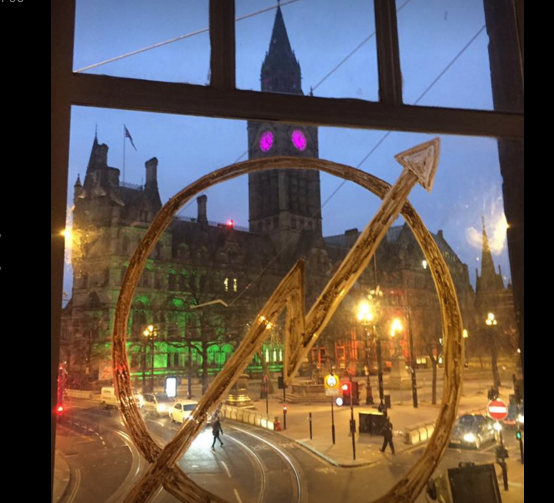 A squat with a view

The distinction between Keats’s exuberance (“we’re here to take over land, regenerate buildings, create safe organic community spaces”) and Blaine’s street-hardened nihilism (“everything in this city is broken from the sewers up”) is stark: so stark, it’s easy to forget they’re part of the same relatively tiny scene.

Blaine would be the first to admit his shelter is a sticking-plaster on a gushing wound. In the Wonder Inn, the Loose Space collective do not generally shelter homeless people at all. Keats says his own uncle is a rough sleeper who has begged him for change in the street, but that he and his crewmates recognise they do not have the capacity or capabilities to care for highly-vulnerable people. “We will help apply pressure,” he says, “but we will not take that load.”

He knows full well system change must come from a Labour council hamstrung by Tory cuts, trying to carve out space in a city centre where “every building is earmarked for development” to support damaged, vulnerable people who are “only going to suck money, suck resources.”

Small as they are, through a series of increasingly high-profile occupations Manchester’s squats have served a critical function in crowbarring open the Overton Window and demonstrating that homeless lives can be changed. In this year’s general election, homelessness was the second-highest priority for Manchester voters, behind NHS pressures. It is members of the squats and homelessness camps whose voices have made headlines in the Manchester Evening News over and over again, calling out Tory and Labour politicians alike to frame the rough-sleeping crisis as the direct consequence of political decisions rather than an unavoidable tragedy

“Two years ago, everyone was dying and no-one cared,” says Blaine. “Now homelessness is the second most talked-about issue in the city, after the NHS.”

Keats claims a senior figure in the city’s homelessness sector approached him after he gave a talk at Manchester Metropolitan University last year, urging him to open a hostel space in the city centre – because “one just isn’t happening.”

Last November, Mayor Andy Burnham announced a package targeting 200 of Manchester’s “most entrenched” rough sleepers, with 270 new properties and intensive, “wrap-around” support. It is a laudable project, and the squatters must be credited for their resilience in bringing the homeless cause into the public consciousness over and over again.

Speaking in the “night shelter”, though, former rough sleeper Wes shares his doubts. “I was on the streets, addicted to spice,” he says. “I was given a gaff [but] I arrived, took one look and thought nope, not for me, that’d make me worse… the turnover of hostels is ridiculous, recycling people through them to make it look like they’re helping.” He credits squatting with giving him the autonomy to clean up, secure labouring work, and begin opening spaces of his own.

As Wes points out, even in a hostel “to achieve a bed for the night you have to be on benefits.” It is the most vulnerable of rough sleepers – perhaps with severe mental health issues setting them at loggerheads with any form of authority – who need squats like Blaine’s’ “night shelter” the most.

Likewise, though the government has been forced to stop actively deporting European rough sleepers by a recent High Court ruling, there is no chance the Czechs, Poles and other Eastern Europeans who pass through Blaine’s squat will be afforded support through the scheme.

In any case, charities estimate there are actually three times the government’s figure of 200 rough sleepers in Greater Manchester, and by Andy Burnham’s own admission homelessness is set to double yet again across this winter alone.

Like all its ilk, the new programme will help some of the people some of the time – and become one more piece of evidence for those who claim rough sleepers have no-one to blame but themselves for their condition. It is not nearly enough.

At a New Years’ Eve rave at the Wonder Inn, partiers cram into a jury-rigged art instillation they call the “squat within a squat”, a tiny door in the wall opening onto a succession of tinier doors. It’s reminiscent of Harry Harrison’s stainless steel rat, the sci-fi crook forced into ever-more ingenious and desperate ploys as the streets and buildings he weaves through become ever more streamlined and impregnable.

“Everything’s getting quicker and quicker,” mutters Blaine, words spilling past his broken teeth. “Less light, less freedom, less space, less rights… There’s posters round town advertising a ‘big change in Manchester’, saying people have been given £30 for a return ticket to engage with their ‘loved ones’ – the same abusive circles they ran away from.” People sleep rough below these backlit signs every night: they die there.

Blaine sees homeless people – his people – being pushed “over the ring-road”, being “paid to rent substandard homes to out of Manchester city so the council can turn around and say ‘look, there’s no longer a homeless problem.” The council makes headline-grabbing promises to the homeless in public, and invites in the investment which socially cleanses the city centre behind closed doors.

Gentrification is not the intrusion of values perceived as liberal or middle-class, but the aggressive repurposing of inner-city space at the expense of working-class communities. (A recent eviction of a DIY village of squatters in an old adventure playground in South Manchester saw local, working-class bailiffs forced to scrap with local, working-class artists and activists.) Though very different, the squats I visit are less chalk and cheese than bread and roses, two parts of the same desperate plea for space, security and a life worth living.

All they can do is keep raising their voices, keep carving out little pockets of resistance from the stainless-steel urban environments which threaten to entomb them – and pass their skills on to the next generation.

Miles south in London, I visit a space opened up by a young scouse lad I first met in a Manchester squat when he was homeless himself. Now, he and his crew are supporting rough sleepers themselves.

Inside the abandoned Chinese restaurant in Islington, I speak to an aged homeless man named Graham, “When I was young we could go anywhere,” he says, his voice like a sack of cigarette butts and ground glass. “Wonder down the road into a field full of cows, if we liked. Now there’s no space left. It’s all flogged off. And that’s why they regard us as revolutionaries.”

The very market forces which make squats more necessary than ever in 2018 are trying their hardest to squeeze them out of existence. The windows of the London squat are crossed over with packing-tape, emblazoned with the legend: fragile.