Police officers have been accused of a heavy-handed approach to their new powers to enforce social distancing. Confusion, public shaming and overzealous enforcement have arisen from the grey area between government guidance and the actual law, as I reported on 31 March.

In an attempt to clarify what police can and cannot enforce, the College of Policing has put together new guidance for police forces with the National Police Chiefs’ Council over the past few days. The PowerPoint briefing was released late last night.

Here are the document’s most notable parts:

This means that under coronavirus powers, a police officer or community support officer can’t just stop you in a public place and ask you to explain what you’re doing/where you’ve been/where you’re going/what you’re carrying.

They can, however, direct you to return home, give you “reasonable instructions” or “use reasonable force” to make sure you go back to where you live, if they believe you are “outside of the place where [you] are living without reasonable excuse”.

They can also instruct gatherings of three or more people to disperse, if you aren’t members of the same household.

“Enforcement should be a last resort”

Police are instructed to “apply the law in a system that is flexible, discretionary and pragmatic”, and to “make sensible decisions and employ their judgement”.

One slide of the presentation is headlined “Safeguarding: we need you to be the professional decision makers on the street”. It calls for an “inquisitive, questioning mindset” from officers – for example, using their judgement to work out if it might not be safe for someone to be at home (because of domestic abuse, child abuse, or mental health issues). “Be professionally curious,” they are told.

“Reasonable excuses” for going out are clarified

The “reasonable excuses” for being outside of your home are less strict under the letter of the law than the government’s advice, as I wrote on 31 March.

This is reflected in the new police guidance, which echoes the language of the legislation (in the case of restricting people’s movement, the Health Protection (Coronavirus, Restrictions) (England) Regulations 2020 and equivalents for the rest of the UK). 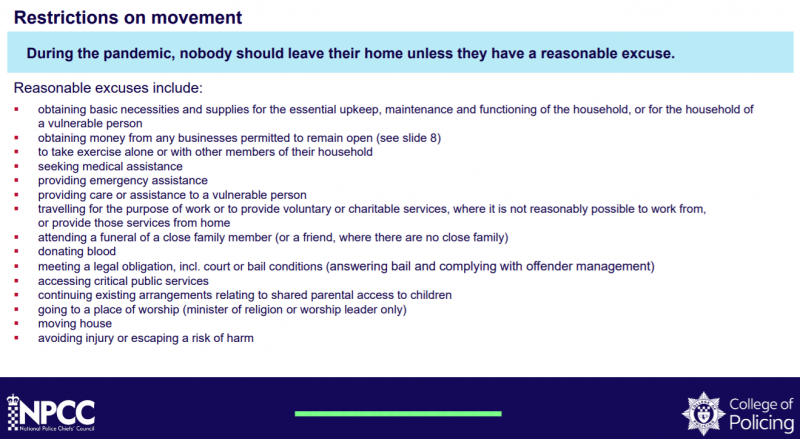 Police cannot rebuke people for taking more than one trip out for exercise a day, or for going in twos (from the same household) to the shops, for example. But people should voluntarily follow the government guidance, which is more specific (suggesting just one exercise outing a day, for example), so as to minimise the spread of the virus.