After weeks on the campaign trail, most politicians take a breather after the polls close. Not Magid Magid. The 29-year-old former Somali refugee – Sheffield’s outgoing Lord Mayor – was straight back out doing public events while waiting for the European election results.

We meet two days before Magid was elected as a Green MEP for Yorkshire and the Humber. He was one of a record seven across Britain, following the party’s highest European election vote share since 1989, and reflecting a “green wave” across the continent.

Magid is bounding around sunny Sheffield in a typically Magid outfit. There’s a slogan t-shirt (“CHOOSE HOPE”), skinny black jeans, gold Casio calculator watch and cherry red Doc Martens. Add to that a yellow baseball cap bearing a Yorkshire rose, worn backwards (the same he donned on Ilkley Moor during campaigning, subverting the Yorkshire folk song –“I wasn’t baht ‘at, I was wit’ ‘at!”).

He has lived in Sheffield since the age of five, after settling there with his mother and five elder siblings as refugees from Somalia. Having hung up his ceremonial chain a week ago (“I’m currently unemployed – genuinely!”), Magid is addressing hundreds of schoolchildren who are on strike against our “climate emergency” in the city centre. Inspired by the 15-year-old Swedish activist Greta Thunberg, school strikes like this are popping up across the world.

Magid receives huge cheers as he joins speakers as young as nine, and the odd supportive teacher (“Well done for skipping school!”). Many of the children are in school uniform, squeezing activism into exam season – and a crowd gathers for photos with him. A selfie expert, he adjusts their phones so they can nab the perfect picture, and commiserates with a group of teenage girls being “sent to isolation” for truancy.

Magid is challenging expectations of what a politician can look and sound like. “Magic Magid” (his martial arts nickname as a Hull university student) became a national sensation when his official Lord Mayor inauguration photo went viral in May 2018. Wearing the livery collar over a natty white jacket, he clambered on to a marble balustrade and posed in a squat, grinning broadly. “I genuinely felt like an imposter – like any moment, someone’s going to catch me out,” he told me. “Then I have to remind myself, fuck it Magid, you’re in this place for a reason.” 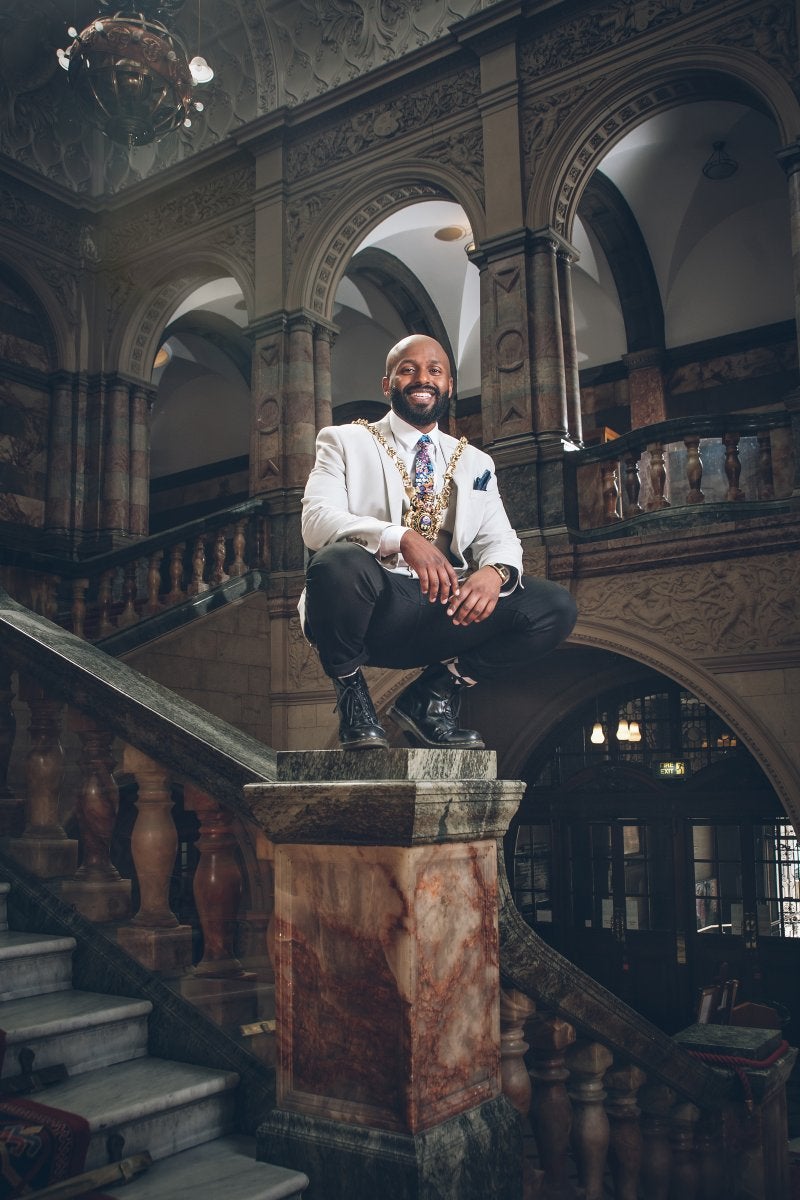 He was Sheffield’s first lord mayor of Somali descent, the first Green in the post, and the country’s youngest ever lord mayor. Living the millennial life in a shared house, he was kicked off the dating app Tinder during the last local elections after using it for campaigning. “Probably some girls complained – maybe they were Tory voters, I don’t know!”

He describes his political approach as “disrupting certain environments, certain systems, certain ways of working – at times making people feel challenged. People have been socially conditioned to expect politicians to behave in a certain way. Purely my existence in that role was some sort of resistance.”

Hence the striking outfits and photo ops. His letter demanding justice for the Orgreave miners entirely in Yorkshire dialect to the Home Secretary Sajid Javid (“Ey up, Saj”) made headlines, as did the entertainment he provided at council meetings: one DJ had councillors dancing to Somali beats in the chamber.

During Donald Trump’s visit last year, Magid called the US President a “wasteman” and “banned” him from entering Sheffield. Wearing a sombrero, he declared it “Mexico Solidarity Day”, in reference to Trump’s comments about the border wall. A backlash followed, including a petition to oust him. He collected a box of hate mail in his mayoral office.

“Some criticism I’ve had is ‘Magid, all you do is attention-seek’. And I’m like ‘I’m literally peacocking!’ I’m trying to draw as much attention as possible to causes I’m championing,” he says. “I haven’t got the privilege of not being ‘too political’, especially being a black Muslim refugee, a minority living in this current political time. It would be such a disservice if I didn’t use my platform to campaign on certain issues.”

Magid says his story “would’ve been a lot less likely” today, because of the government’s hostile environment policy towards immigrants, and “the way refugees are being treated across Mediterranean Europe”.

Indeed, he sees more racism now than when he arrived. Growing up in a diverse area, alongside “people from Yemen, the Caribbean, Pakistan”, not speaking much English wasn’t a barrier when playing with other children.

“One thing I’ve definitely seen is a lot of direct or indirect racists are feeling emboldened, and they feel the need to publicly express themselves,” he says, when we settle at a café on a cobbled street near the townhall. We order Yorkshire tea for one, as he’s fasting for Ramadan.

“You can row that back to people like your Boris Johnsons with certain comments, and politicians abroad, like your Donald Trumps, who legitimise and normalise a lot of the language. That has definitely changed and is quite scary.”

Having never voted before, Magid was politicised by the last European elections in 2014, becoming a councillor two years later. “I saw the rise of Nigel Farage and Ukip, a lot of rhetoric of fear and division, and thought ‘fuck, if I can play my small part, at least I’m contributing’.”

Five years on, Magid will be sitting alongside 29 Brexit Party politicians led by Farage in the European Parliament. Yet he feels buoyed by other trends – the striking schoolkids, for example. “When I was their age, not turning up to school I’d probably have got up to some mischief!” he laughs. “A lot of people feel mobilised, and feel the need to do something. People aren’t as apathetic as they were in the past.”

Although his stint in Brussels may be short-lived – Britain is supposed to leave the EU on 31 October – Magid Magid is clearly in it for the long haul.

“It is genuinely a really scary political time that we live in at the moment. What is the future of Britain? Who are going to be the future authors of Britain?” he asks. “I refuse to believe they are people like Jacob Rees-Mogg and Nigel Farage. I believe there’s a better story to be told of Britain. One of bringing people together, of hope, and of tolerance.”

This article appears in the 29 May 2019 issue of the New Statesman, Theresa May’s toxic legacy