These things don’t exactly make great beach reads – but squint at them the right way, and you’ll find some pretty interesting insights. Much of the best stuff concerns how London relates to the rest of the UK. Consider.

You can see the story of a life in the times when people move.

Look at this chart, from last year’s document. It shows the percentage of people who move to a new local authority area at each age, from zero to 90+. 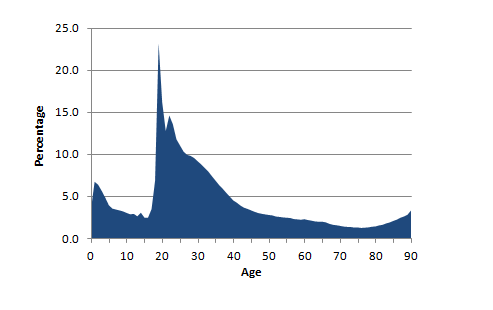 There’s a small spike in early childhood, as young parents move so their offspring can have more space and/or get on the list for the right schools. Then things are pretty stable right through adolescence, until a much bigger spike, showing more than a fifth of 19 year olds switch locations – heading mostly, one assumes, to university.

There’s another mini-spike at 22, as people start their careers, but then people gradually become less and less likely to move until, by middle age they’re overwhelmingly likely to stay put in a given area. That only changes at the end of life, presumably when frailty forces the elderly to move to care homes or to be near family. It’s the circle of life.

And, as it turns out, the net migration out of London is by far the biggest figure. That’s true, both in absolute numbers…

…and relative to population size. This is net interal migration, per thousand population:

But the rate at which that’s happening has actually fallen.

In the year to June 2013, London’s net migration to the rest of England and Wales stood at around 55,000. But, according to figures from the city’s authorities, in 2006-7, the net outflow stood at 80,300; five years before that, it was 97,100. Look at this chart, showing arrivals, departures and the difference between them:

And London’s population is still growing.

In the year to mid-2012, in fact, it increased by 1.3%, to 8.3 million. Partly this is because London is the main destination for international migrants to the UK (nearly two in five Londoners were born overseas); partly, it’s a baby thing. London’s birth rate in 2012 stood at 16.2 births per thousand people. In England and Wales as a whole, it was just 12.9.

At any rate, the net result of all this is that, after shrinking in the second half of the 20th century, London will soon be bigger than at any time since before the Blitz. This population increase is almost certainly one factor behind the city’s house price boom: we’re just not building enough homes to keep up with rising demand.

In the year to June 2012, nearly a quarter of a million people (247,923) left the city for destinations elsewhere in England and Wales. Nearly two thirds of those, though, left for the surrounding regions: 40% of them went to the South East, 26% to the East.

Those figures, oddly enough, are roughly proportional to the share of London’s circumference each of the two regions occupies. The obvious reading is that a lot of those who leave the capital are only getting as far as the commuter belt. They’re leaving the city; they’re not leaving its orbit.