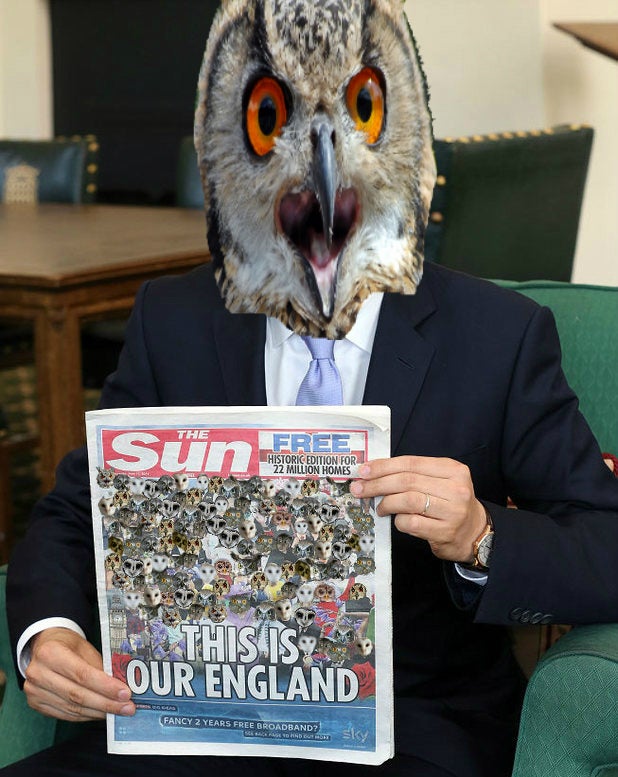 In the latest edition of Westminster politics looking more and more like a rejected script from The Thick Of It, it is several hours since an official Twitter account for the political party that still claims to represent the interests of working class people in Britain sent out a missive appearing to offer everyone in the nation an owl. 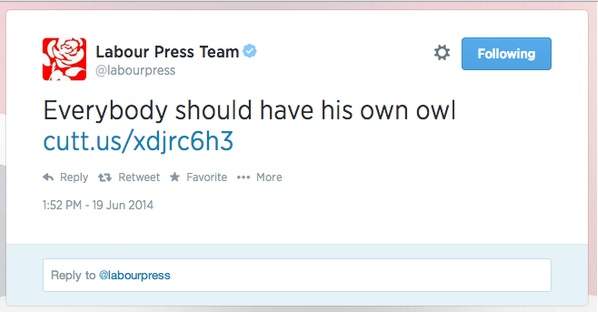 Various factions of the creaky Labour PR machine are now trying to deflect blame for what we shall call the Tweet Twoo incident. These, bear in mind, are the same people who let Ed Miliband pose with a creepy smile and a copy of the Sun last week – and then made him apologise.

The official story is that their feed was “hacked”, although nobody knows how, or why, or what hacking actually means, or which ornithology enthusiast apparently broke into the Labour Press Twitter feed in order to tweet something random about birds. It could have been a disgruntled intern, or somebody’s drunk colleague. Whichever it was, this is still my favourite thing that’s happened in this country since that time the BNP were chased through Whitehall by a group of women dressed as badgers.

The anti-fascist badgers, however, did make me briefly feel proud to be British. Owlgate, once I’d got over giggling so hard I accidentally inhaled a bit of toast, is pretty dispiriting. The fact is that the owls, prank or not, are the only policy Labour has come up with in the past 12 months that has been at all inspiring. Their headline move of the past month has been promising more pressure on young people, who clearly haven’t been screwed over enough by six years of austerity, punitive housing and welfare policies and soaring education costs. Labour is now telling young people aged 18-21 that they won’t receive the crumbs of state support they were still entitled to unless they find work or training, which probably means more unpaid labour at Poundland. I was preparing myself to vote Labour with gritted teeth if there were no good Green candidates in my area but I’d feel far less dirty about the whole thing if I knew I was getting my own owl.

The more you think about it, the better an idea it is. The Tories have channelled enormous efforts into unifying an increasingly divided and unequal nation, beating up teenage protesters in the street, deflecting anger onto immigrants, the disabled and people with mental health difficulties, and trying to get us all to talk about “British Values” as if a bunch of right-wing aristocrats inhabited the same planet as their electorate, let alone the same country. Instead of all that, why not just buy everyone a slightly exotic pet? It might not be a social media gaffe after all. It might be genius.

I do have a few questions, though. I want to know if the owls will be standardised. Who-whoo do I contact if my owl is defective? Will I have to raise my owl from a chick, feeding it tiny little gross bits of mouse and mince, or will it be presented to me personally by the council on the day Miliband swoops into power? Will the unemployed have to turn up at the Raptor Centre twice a week in order to keep their owl? How long will asylum seekers have to wait until they receive an owl of their own? What if some people, perhaps because of cultural differences, might prefer a different bird of prey, say a buzzard or a crested goshawk? Will small boys in Northern towns be allowed to keep their kestrels? If we must have an owl, can we choose what kind?  The public demands answers.

Perhaps it’ll turn out that the Americans are right. Maybe Britain actually is a land of magic and make-believe, in which case it shouldn’t just be students at Hogwarts who are entitled to an owl. They’ve privatised the post office, so perhaps this is Labour’s solution: owls swooping down the chimneys of local authority-owned housing, dropping eviction notices and stern letters from the Department for Work and Pensions telling people with terminal cancer that they have to get a job or be kicked out on the street.

Or maybe it’ll be more like the film Labyrinth, but instead of a snowy owl flapping into your bedroom and turning into David Bowie in a fright wig and very tight tights, it turns into Ed Miliband. Hold that thought in your mind for a second, and imagine Owl Miliband waggling a magic crystal ball about and telling jobless, hopeless young people that their benefits have been stolen away, far far away, to the centre of a treacherous maze, lost for ever unless they can find work or training in thirteen hours.

What we need is a robust, brave opposition that can actually come up with policies to make people’s lives better, rather than competing with the Conservatives to bully benefit claimants and immigrants, a game nobody wins apart from whoever slides into Downing Street next year on a slimy trickle of popular prejudice. Instead we’ve got a bloodless, practically leaderless bunch of incompetents trying and failing to look as nasty and therefore electable as the Tories and only managing to look like a awkward kids in unconvincing monster masks. I had a final point to make, but I’m just too depressed. Give me my owl now and go away.