The Prime Minister made a big bold statement yesterday. No, not that she likes to dance to Abba (who doesn’t) but that she was “ending austerity”.

Announcing the end of austerity is sensible politics. After all who, apart from a few fringe think tanks, says they want more austerity in of itself? There are also signs of public opinion moving towards favouring more spending (and the taxes to pay for it). However, it is also risky as it will be thrown back at her by Labour every time evidence of ongoing spending restraint emerges.

So what is the truth?

If austerity means aiming to reduce the deficit then clearly it’s far from over. The Treasury is formally committed to the long-held ambition to balance the budget – but achieving that is still a very long way off. At the Spring Statement last March the government wasn’t on track to reach that goal until 2027-28, with further tax rises and spending cuts required to get us there. That’s not so much ending austerity as enduring another decade of it.

Commons Confidential: Will Allegra be next to turn on Boris Johnson? 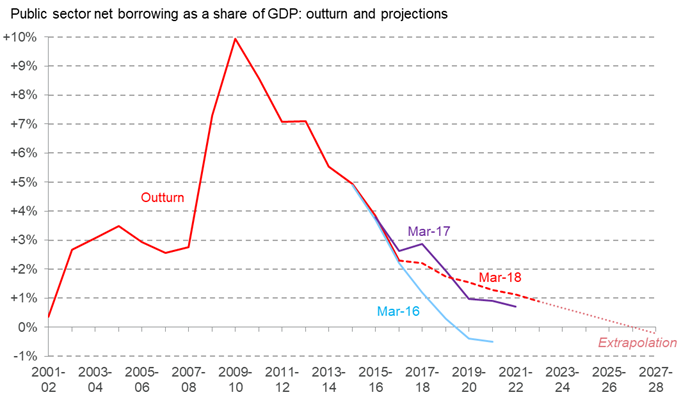 But for most people ending austerity is really about the programme of reductions in public spending – be that the cash local government has to spend or social security cuts – rather than the abstract issue of the government’s deficit. The latest public spending figures from the Spring Statement allow us to see what the government has pencilled in on that front. Here there might superficially be some better news for the ‘we’re ending austerity’ argument.

In terms of real-terms spending per person, overall government expenditure (TME) is already set to be rising slightly, having fallen by 5 per cent since 2010. Yes that small rise is driven entirely by increases in spending on debt interest and other non-public service areas (AME). But even if we focus on departmental spending (DEL), the trajectory looks basically flat over the coming year. Not very austere you might think. So is austerity already over? 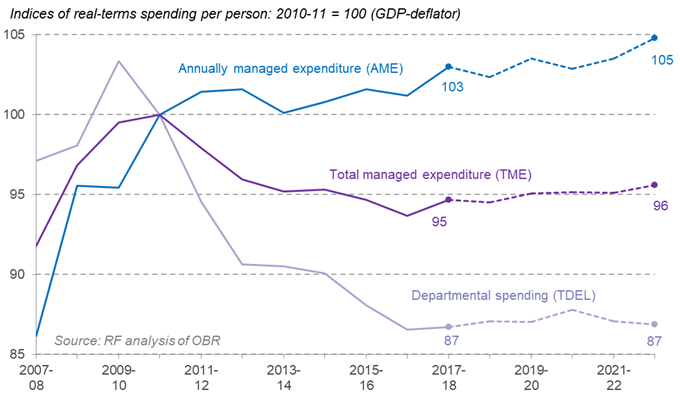 Well, no. Although overall departmental spending is flat, this is being driven by a planned capital splurge that isn’t any use for running schools or hospitals on a day-to-day basis. Focusing instead on resource spending (RDEL) – what we use to pay teachers’ and nurses’ salaries, run prisons and libraries – real spending per person is on course to fall further in the coming years. Austerity as most people think of it ain’t over yet. 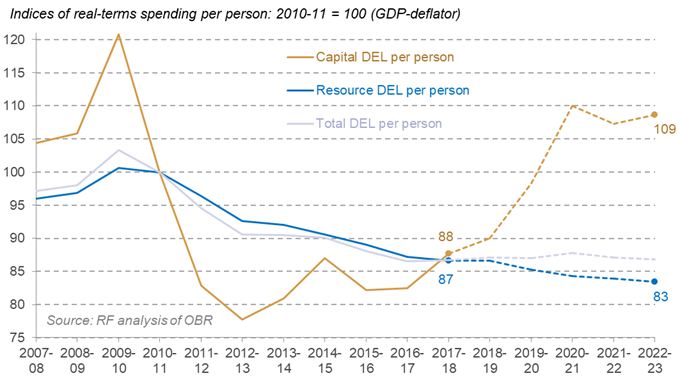 But before you conclude that this is easy to achieve, particularly given relatively good news on the public finances this year, remember that even this wouldn’t feel like an end to austerity for all public services. That’s because a number of departments – not least health – are already set to receive budget boosts, meaning an overall flat spending envelope will still produce some (big) losers.

It is also important to remember here that we’re talking about public spending into the 2020s – the decade when the costs of an ageing society start to seriously build. Our ageing population and wider health cost pressures mean spending on health, care and social security will need to rise by £36bn by 2030 simply to maintain our existing welfare state. So, for a host of reasons, even preventing falls in departmental spending will not feel like an end to austerity. This is why the era of tax cuts are well and truly behind us. 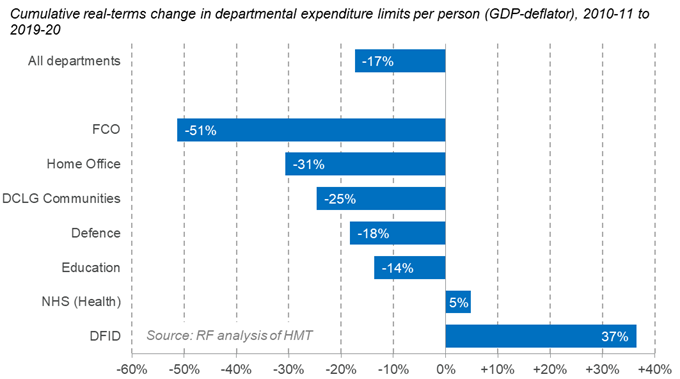 And obviously we must not forget that it’s hard to say austerity is over for “just about managing” families while their benefits are being cut over the next few years. Indeed the inflation figures in just a few weeks’ time will reveal the scale of the working age benefit freeze set for next April, a freeze that this this year has meant an average loss of £315 loss for families with children. 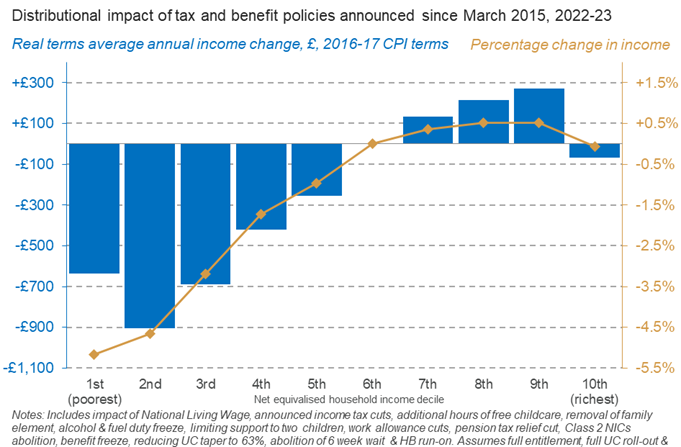 So the simple answer is no – austerity has not been ended. Doing so involves difficult trade-offs and, in the case of making it feel like the good times are here again on public spending, some combination of tax rises and/or accepting that deficit goals will be missed.

In theory the Chancellor could address those trade-offs in his Budget in just a few weeks’ time – indeed he has previously suggested he would announce more details of the government’s spending plans at that point. But I think there is almost no chance of him doing so – not least because announcing firm spending plans would confirm exactly what this analysis shows: that austerity is alive and kicking.

But that doesn’t mean this speech means nothing when it comes to ending austerity. Looking to the longer term, in many ways today’s speech itself was a sign that the political will necessary to maintain austerity is ebbing away. After all it involved announcing scrapping a fuel duty rise (costing about a billion) and lifting the cap on councils’ borrowing for housing (which means higher borrowing and debt).

So yes the speech has generally been well received – including for the dancing involved – but it will have gone down very badly indeed in the Treasury. What today really shows is that while austerity is here for a while longer, many Tories wish it just wasn’t.

This articles was first published on the Resolution Foundation website.