Remember “parliamentary sovereignty”? Remember “take back control”? Well forget all that, because it’s 2019, B-day is fast approaching, and the truly democratic choice is now to suspend all the mechanisms of British democracy so Prime Minister Boris Johnson – never faced an election, leads a minority government, chosen by an electorate almost the exact size of Grimsby – can do whatever the hell he wants.

Here’s the Telegraph headline that got everyone very excited this morning:

Boris Johnson has public’s support to shut down Parliament to get Brexit over line, exclusive poll suggests

The key stat in said EXCLUSIVE POLL is this: “54 per cent of British adults think Parliament should be prorogued to prevent MPs stopping a no-deal Brexit”.

“Prorogued”, if you’re just joining us, means temporarily closed. It happens all the time – Parliament is prorogued by the Queen fairly regularly, to mark the end of one session, before she opens it up again for the next one – and so is nothing sinister in itself.

The problem is the specific sense it’s taken on in recent political debate, in which it’s come to refer to the idea of shutting Parliament down for a few weeks so that our elected representatives can’t do anything that might possibly stop Britain falling out of the European Union without a deal, with all the fun and games and empty shelves and lorry queues and punch ups outside pharmacies that will inevitably follow.

A lot of people were instantly very suspicious of this poll, for all sorts of reasons. One is that it was just a bit too close to what the Telegraph was clearly hoping would happen, which is always a reason for caution. Another was that it was, well, interesting, and a poll being interesting is often a clue that it’s an outlier, or just plain wrong.

Q.7 Do you agree or disagree with the following statements? Boris needs to deliver Brexit by any means, including suspending parliament if necessary, in order to prevent MPs from stopping it Base: All respondents

And here are the top-line results. See if you can spot what’s wrong with them: 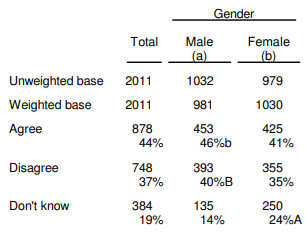 The first thing to note is that nowhere does this say that 54 per cent of the public back the idea of blah blah blah. Actually, only 44 per cent do which, you’ll note, is not a majority; another 37 per cent oppose. The other 19 per cent of the electorate answered “don’t know”.

How did the Telegraph get to its 54 per cent figure? By pretending that last group of people don’t actually exist, which is a bit of a problem because they definitely do. One could charitably describe the paper’s conclusion that a majority of people support prorogation as “cheeky”.

There are other problems. One is that polling on agree/disagree statements is a bit iffy – according to Anthony Wells:

For whatever reason, decades of academic research into questionnaire design suggest people are more likely to agree with statements than to disagree with them, regardless of what the statement is (generally referred to as “acquiescence bias”).

So, simply framing the question this way round may very well have pushed people to answer in such a way to suggest they loved a bit of prorogation.

The phrasing of the question itself is a bit odd, too. It contains multiple clauses (“by any means”), which you’re not meant to do in polling because it makes it hard to boil answers down to a simple binary. It refers to “Boris” rather than “the Prime Minister” or “Boris Johnson”, which is strangely cosy. And it doesn’t feel massively balanced: it’s painting a picture of lovely, friendly, heroic Boris crusading for the people against annoying but anonymous MPs, which is a great way of getting people to answer in such a way as to please lovely, friendly Boris, but not a great way of getting accurate data.

So: all in all, there are good reasons to think even that 44 per cent might be a bit inflated. There’s a load more data in the survey, about differences in views between people of different genders, ages, social classes and so on, but frankly that doesn’t seem worth getting into because the whole thing is almost certainly pony.

There is, then, no reason to fear that more than half of our fellow countrymen – including, bafflingly, 17 per cent of Remainers – now think that Brexit is so important we should toss centuries of parliamentary democracy overboard in its pursuit. This is not a thing that should frighten you.

What should frighten you is that one of our leading newspapers, and the Prime Minister’s former employer to boot, is encouraging him to entirely set fire to the British constitution to take Britain out of the EU without a deal. And also, while we’re here, that it can’t count.