On 7 October 2018, as the world waited for news of a Brexit deal between the UK and EU, one British newspaper refused to follow the protracted negotiations. On its front page, the Daily Star Sunday declared itself a “GUARANTEED BREXIT-FREE ZONE… UNTIL SOMETHING ACTUALLY HAPPENS!”

It was an expression of jollity, and a welcome break from Brexit monotony – something that had been missing from our national conversation in recent years.

With poisonous rhetoric from politicians, and the incendiary “Enemies of the People”-style front pages of other British newspapers, the Daily Star – perhaps burdened with a reputation for hackneyed tabloid fodder – had found a unique selling point.

Now, the paper is better known for jauntily lampooning current affairs on its splashes, which seem to go viral on social media every few weeks. The pandemic has provided a rich source of hammy yet entertaining photoshopping and punning of the old-school red-top variety.

Matt Hancock as Coco the Clown; cut-out-and-keep Dominic Cummings masks (aka the “Do whatever the hell you want and sod everybody else mask”); an attack on supermarket stockpilers headlined “Unexpected moron in the bagging area!”; “Free historical statues for every reader” (readers can either “cut out and shout at them” or “cut them out and shout at people for shouting at them”, in reference to the national debate over whether statues of colonialists should be removed from public display). 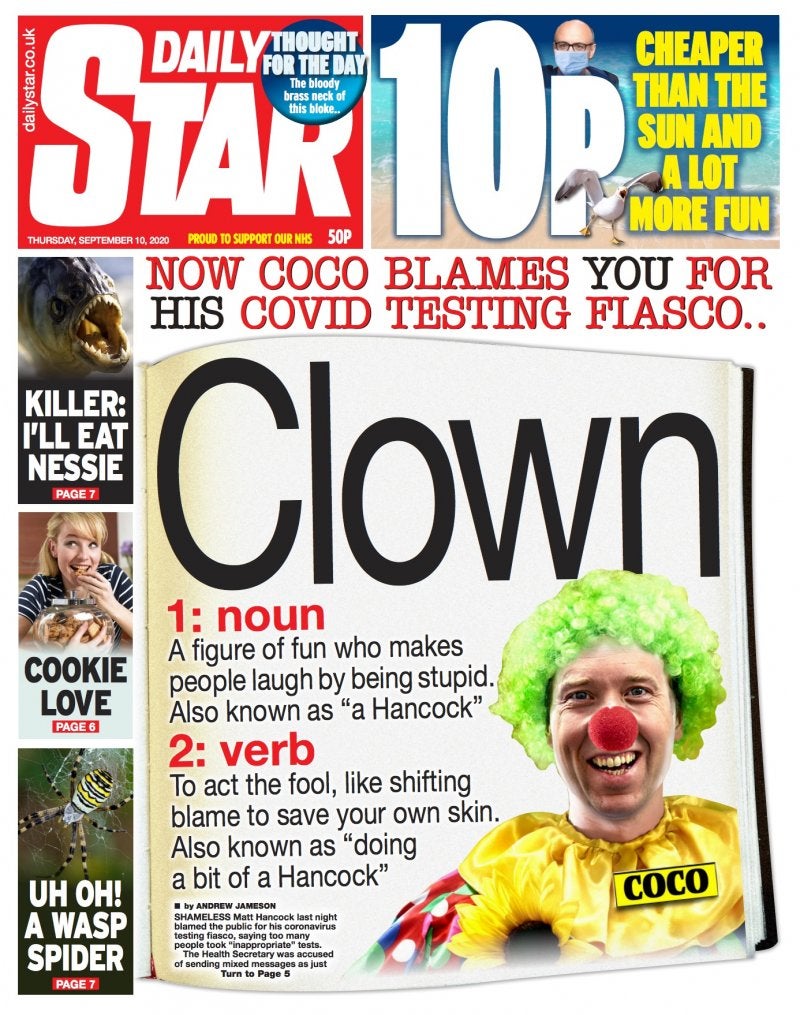 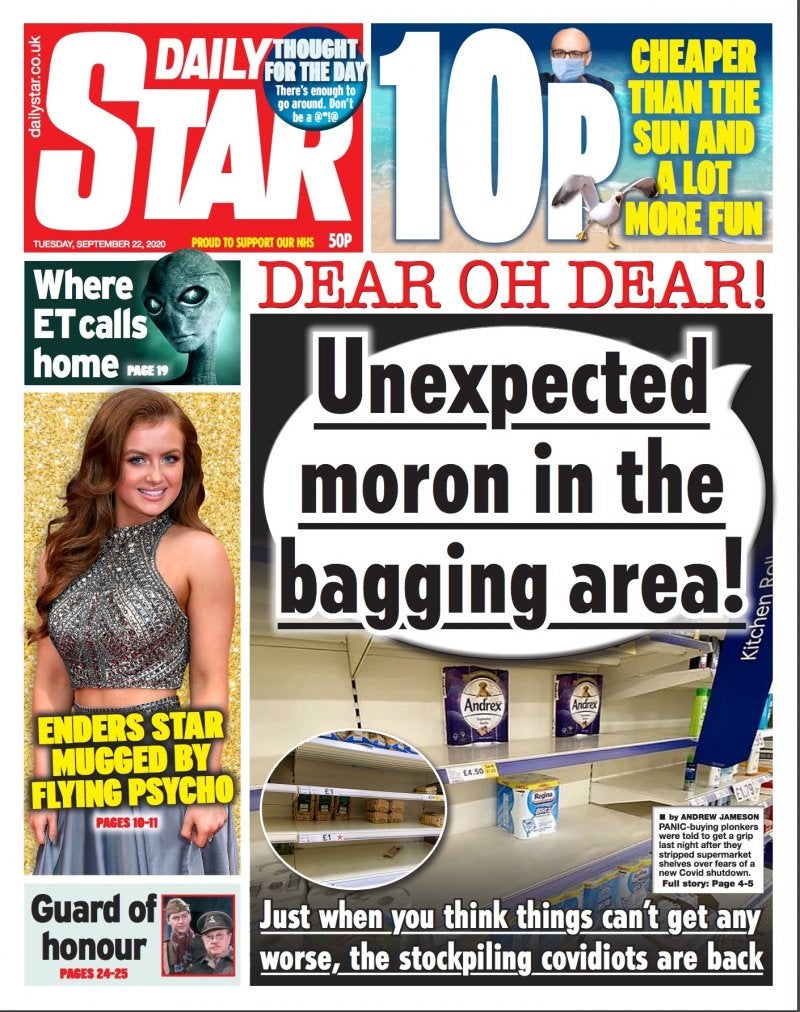 A recent Twitter-friendly splash was headlined “PM FOR PM?”, asking whether Good Morning Britain’s Piers Morgan should become prime minister after his success interrogating hapless ministers who appear on his programme (“… but would his ego fit through No 10’s doors?” the piece mused). 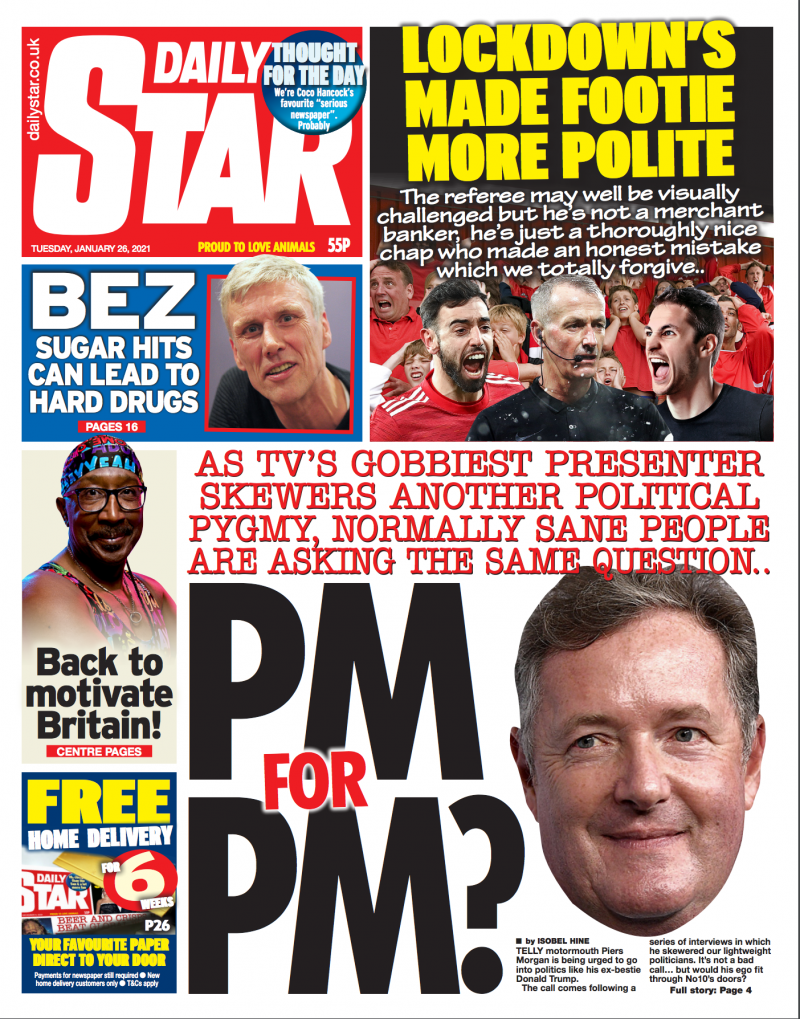 Despite these themes, it avoids an explicit political stance. When the UK left the EU on 31 January 2020, the paper ran a special “souvenir edition” emblazoned with a Union Jack and map of the UK: “Tonight is a TRULY HISTORIC moment for our great nation…” teased its headline. “…That’s right, it’s the end of Dry January!” 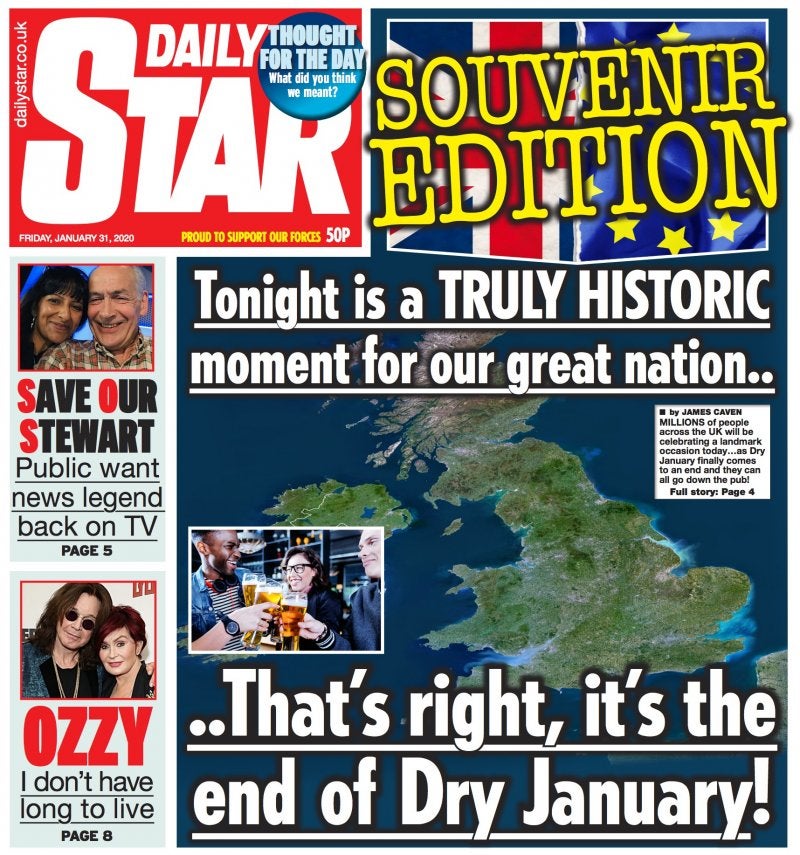 So what’s behind the Daily Star’s journey from showbiz fare to cheeky political satire? After all, it was the last newspaper to abandon Page 3, which it only did in 2019 (“Good news. It only took 30 years,” commented Clare Short to the Guardian at the time; the former Labour cabinet minister had campaigned since the 1980s for an end to the tabloid tradition.)

In October 2018, veteran media commentator and former Daily Star features editor Roy Greenslade condemned the paper as “a middle-aged non-entity” on the newspaper’s 40th birthday: “A pathetic article, a travesty of a newspaper, having lost any sense of purpose.”

During the early Eighties, the Star was rising as a genuine rival to the Sun, and was drawing readers from the Daily Mirror too. The paper was originally created in 1978 with a pro-Labour stance, for distribution in the north and Midlands.

Its circulation plunged under a new editorship in 1987, whose collaboration with the Daily Sport and promise to publish “the biggest boobs possible” in every edition took the paper downmarket in both senses of the word. Acquired along with the rest of Express Newspapers by the former pornographer Richard Desmond in 2000, it churned out soap and reality TV gossip in sleazy tones for years. Only once it was sold to Reach – the publisher of the Mirror – in 2018 did it begin to embrace mischief and satire under the new editorship of Jon Clark, who had worked for two decades at the Mirror.

“From the moment we took over the Daily Star in March 2018, we wanted to follow a very simple mantra: More Fun Than the Sun,” Clark tells me.” So we try hard to be the antidote to the relentless gloomy news agenda.”

His aim is for “a cheeky Carry On vibe” to coverage, he says.

Yet some of his recent front pages, particularly the Cummings mask splash, were born out of “an incredible anger that there appeared to be one rule for our readers – who were diligently observing lockdown – and another rule for the ruling elite”, he adds. 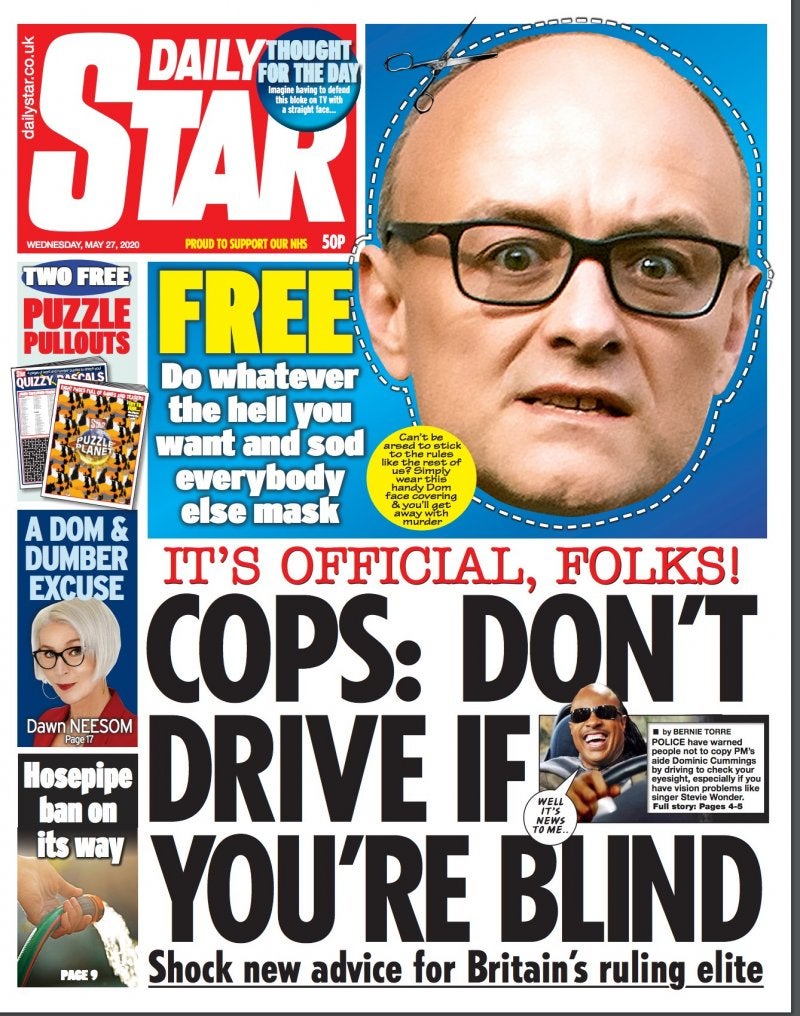 The Cummings mask was, he says, “the real start of our foray into politics” and “has been well received by many”. The paper, Clark claims, is now the first front page that staff in No 10 turn to every morning.

The Star has also performed relatively well commercially. In July 2020, it enjoyed the biggest recovery from the worst of the Covid-19 lockdown readership slump in June that year, growing its average daily circulation by 5 per cent month-on-month to 223,727 (no other paid-for national newspaper grew its circulation by more than 3 per cent in the same period).

Two-thirds of the Star’s print readers are men, and its online readership is closer to a 50:50 gender split. “Our readers are hard-working folk who don’t want to be lectured,” says Clark. “They make up their own minds. They want to be informed, entertained and uplifted in difficult times.”

What about gaining a new readership – particularly the social media crowd who delight in the Star sending up our obfuscating and bungling politicians? Clark believes he and his staff have made “real progress” in tackling “some rather snobby misconceptions” about his paper. (“After all,” he adds, “if I had been told three years ago that the New Statesman was interested in featuring us, I’d have laughed.”)

So is this the end of the public’s only “Brexit-free zone”? “When it came to Brexit, we kept it off our front pages because we genuinely thought it was as boring as hell. The same questions, the same arguments, the same voices shouting in their respective social media echo chambers for four bloody years,” says Clark. “The art of sensible debate and agreeing to disagree has vanished.”

Perhaps the Daily Star’s front pages are providing an unlikely home for its reappearance.