It’s the 50-year anniversary of the former Tory cabinet minister’s notorious tirade against immigration on 20 April, and Radio 4 will air an actor delivering the speech in its entirety for the first time ever on British radio.

Understandably, Rajan’s tweet invoked fury from his followers, including politicians, who are accusing the public service broadcaster of doing the opposite of its job by giving so much airtime to an incitement of racist violence, which includes lines such as: “In this country in 15 or 20 years’ time the black man will have the whip hand over the white man.”

Rajan attempted to defend the programme, which he’s presenting, by urging his detractors to “click on the link” he posted, to learn that “the speech is broken up, and critiqued by voices from across the spectrum. Not just read out in a single go. Though of course some will still object”.

And yes, Amol, they are still objecting. Because the description of the programme doesn’t signal any such commentary: 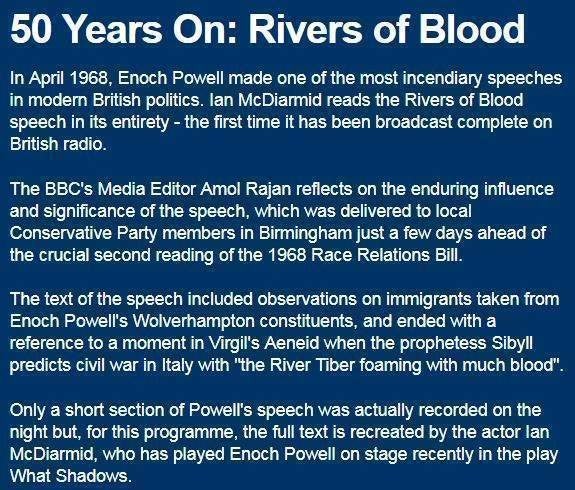 However the programme is structured, this is an excessive amount of uncritical time to dedicate to what was basically a racist rant by a politician trying to worm his way up the Tory party career ladder.

It’s also inappropriate to treat a sentiment that is a very real, horrifying and dangerous presence in the lives of those from ethnic minority backgrounds living in Britain today as if it’s a quirk of history, up for bit of cosy Radio 4 anniversary treatment.

Frankly, to boast about the “first time EVER” this speech is being broadcasted in full is pretty distasteful to the people who face racism, and areas beset by racial tensions, in modern Britain, who would probably prefer to keep it unaired.

Not a good look, particularly at a time when the BBC is under fire from the left and right for the balance (or lack thereof) of its political coverage.