On 14 December, the electoral college will cast its votes to officially elect Joe Biden as the 46th president of the United States; I doubt, however, this will stop Donald Trump maintaining the election was fraudulent. Trump is a sort of satanic Father Christmas, demonstrating that if you keep at it, you can make all your lies come true. He might yet be dispersing his legal teams across America for a final attempt to sniff out vital and non existent votes, like litigious hogs foraging for phantom truffles.

If that doesn’t work, the president has one last strategy; to try to take his ­legal challenge to the Supreme Court. He could resign from the White House, have vice-president Mike Pence sworn in, persuade him to pack the Supreme Court bench with ten extra judges, including Jared Kushner, Ivanka, Don Jr, Eric, Barron, Michael Flynn, Roger Stone and, in a controversial move, Donald Trump himself. Even so, they’d still probably throw out the case.

Senior Republicans are silent, ­behaving as if in an abusive relationship with Trump: they know he’s dangerous but will not speak for fear of the consequences. This isn’t a metaphor, since most of Trump’s supporters have guns. But nothing else can explain why, during the increasingly spurious legal challenges to democracy, high-ranking and presumably intelligent party members such as Mitch McConnell, the Senate majority leader, would pad up to a microphone and say the president is “100 per cent within his rights” rather than, “I have no dignity, my self-worth is damaged beyond repair, and the closer I am to Donald Trump, the more I am eaten alive from inside. I would like you to take me somewhere safe.”

[see also: If the events of this pandemic year have taught me anything, it is the virtue of empathy]

This is on a par with how senior Republicans have behaved whenever Trump has said anything indefensible over the past four years. Were Trump to have tweeted, for example, “THE LINCOLN MEMORIAL IS MADE FROM EGGS!!”, the race would be on to see which loyal Republican senator or governor would be first to respond with “I, like all patriotic Americans, love the Lincoln Memorial and want to see it standing strong and secure for future generations. It’s crucial, therefore, that we know once and for all whether or not it’s made from eggs.”

It has been fun, in the lead-up to Christmas, watching Trump’s challenges being struck down daily in an advent calendar of judicial mayhem. But we would do well to prepare ourselves for the lasting damage this process has caused. The silence from Republicans has allowed Trump’s false claims over a stolen election to ­fester into normality; it’s a tacit endorsement of ­deliberate deception as a valid political ­tactic. Trump’s exit could be far more destructive than his four years in power.

The result is that Trump leaves having convinced a sizeable chunk of the US electorate that American democracy is a sham, and that only he, their Mar-a-Lago president in exile, can fix it. Whether or not he does run again in 2024, the coded signals about his intent perpetuate the living fiction that he’s still the centre of all things. This has toxified Biden’s presidency before it has started, because it may lure half the population of the United States into behaving as if they’re living through a second Trump term. If the US is like the Roman empire, then we’re entering the equivalent of Rome’s Crisis of the Third Century, when competing emperors sapped the state’s energies in endless civil wars. It didn’t end well, and that was only with arrows and catapults.

Trump’s strategy may not even be to overturn the election, but rather to test how susceptible America is to lies. His arguments were never designed to make sense. He blamed everyone from bad voters to bad judges. At one point, he was arguing for the count to continue in Arizona and stop in Michigan. He blamed faulty machines, corrupt polling officials and stupid voters who didn’t fill out their ballots properly. It was only a short leap for him to declare that he would have won big if you didn’t count the illegal states, or for Rudy Giuliani to claim that Nasa conspired with the sun to time solar flares at heavily Republican counties on the day of the vote, thus flipping the circuitry in older voting machines.

Yes, we can laugh at the irrationality, but for Trump, that’s the point: that it’s possible to hold two contradictory thoughts at once, and to believe in them equally forcefully as long as you don’t examine them too closely. Hence, the Republican message is that Trump won this election, but also that he lost it and will run again in 2024. Hence also the belief in the impossible; that someone who lost the popular vote in 2016, and again by a bigger margin in 2020, should be the one to run in 2024, in the hope, presumably, that he can lose it by even more.

That’s the power of positive-and-negative thinking; all that you believe becomes equally real. Trump’s refusal to acknowledge his loss reaffirms his commitment to an alternative reality he’s been inhabiting ever since he took office four years ago. Every day of his presidency was devoted to playing out a psychodrama issuing from inside his skull. As far as he’s concerned, having the election stolen is no less an objective fact than the other truths he holds dear and which never happened: that the wall has been built, that Mexico paid for it, that we’re “rounding the turn” on the pandemic, that all people love him everywhere, that he’s the least racist of all the racist men he knows.

The more our political leaders give credibility to such delusion, the stronger this mindset will become. Once whatever we believe is validated in the eyes of the law – say a new norm becomes enshrined in a Supreme Court judgement – then Trump’s reality will have the last laugh, facts will turn to ash, and the cycle of abuse will resume in a shiny new republic of riddles. Consider all this as you lie to your children about Father Christmas. That said, have a merry one. 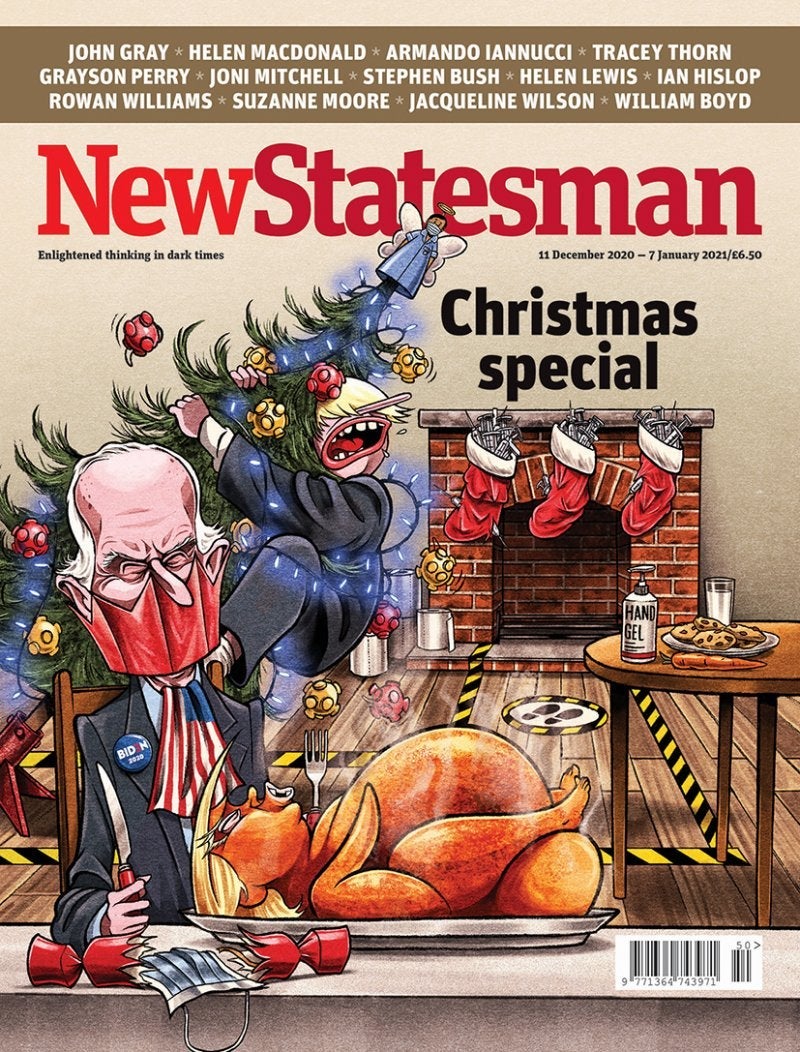