In spite of the fact that it accords with common wisdom – or maybe because of it – aside from the odd (sometimes very odd) political scientist, not many people will have heard of ‘May’s special law of curvilinear disparity’. Essentially, it argues that those holding the most radical views in any political party will be its members and, in particular, those members who hold positions within their parties – branch secretaries, association chairs, delegates to various national bodies, etc.

According to May (John, not Theresa; perhaps we should have mentioned that earlier), if you draw a diagram showing the distribution of views in, say, a centre-left party, with its voters at the bottom, its activists half-way up and then its parliamentary elite at the top, the line will bulge out to the left as you go from voters to activists, and then return toward the centre as you go from those activists to MPs. If you do the same for a right wing party, then that same line will bulge out to the right and then come back in again

If, then, you were to put Labour and the Conservatives on the same diagram, then you’d get a diamond shape looking something like this: 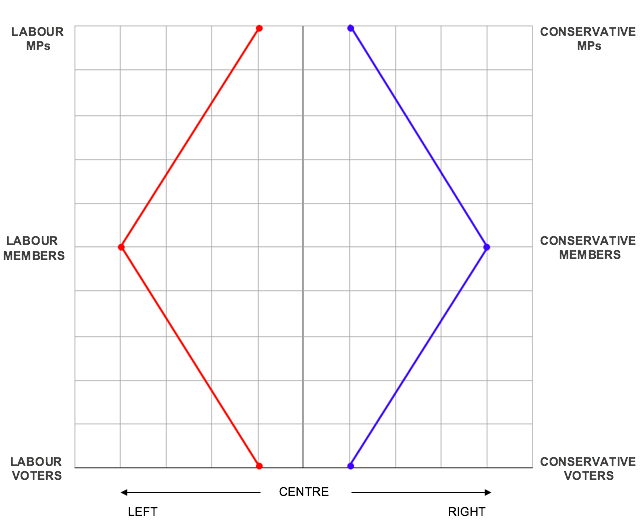 This fits with what most casual observers of British politics often assume, namely that grassroots members are the real zealots while MPs, who after all have to get elected, are, like most voters, slightly more pragmatic. This is the dominant narrative surrounding Labour in the Corbyn-era and is a trope traditionally trundled out whenever the audience at Tory party conferences has demanded a harder line on anything from trade unions, to tax and spend, and, in particular, law n’ order. ‘Trots to the left of them, blue-rinse dragons to the right’, as it were.

In fact, plenty of research suggests May’s law doesn’t actually hold up very well, not least because it tends to overstate the realism/centrism of a party’s MPs, who are rather more inclined to be true-believers than the unprincipled sell-outs they are routinely portrayed as by their critics. May’s law (not sure why we still call it a law, but we do) also underplays the extent to which members (including active members) like winning elections, even if that means moderating their opinions. And it forgets that, on some issues anyway, voters can be pretty radical, too.

If we return to our diagram, then, rather than a diamond, we might imagine a fan shape. 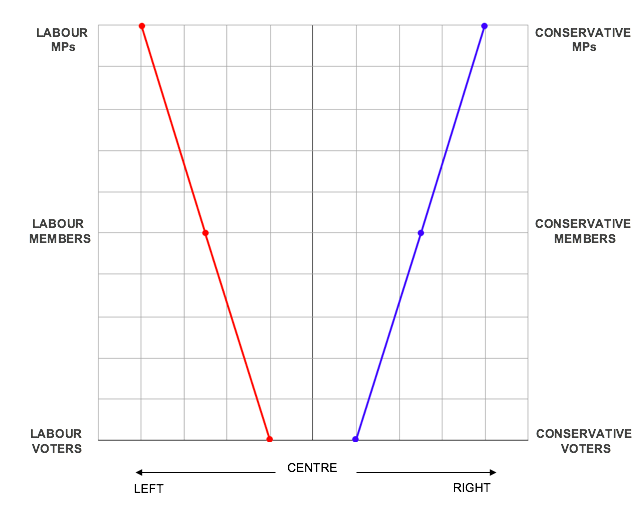 So, is Brexit a case in point?  Very possibly.

When it comes to the Conservative Party’s voters, some 69 per cent appear to have voted Leave in the 2016 Referendum.  The figure for members, according to research conducted for the ESRC-funded Party Members Project, is 70 per cent.  But for Tory MPs, research just released by UK in a Changing Europe and Queen Mary University of London’s Mile End Institute, puts it (excluding any MP who wouldn’t say or didn’t vote) at just 55 per cent.

Which leaves us with a diagram looking something like this: 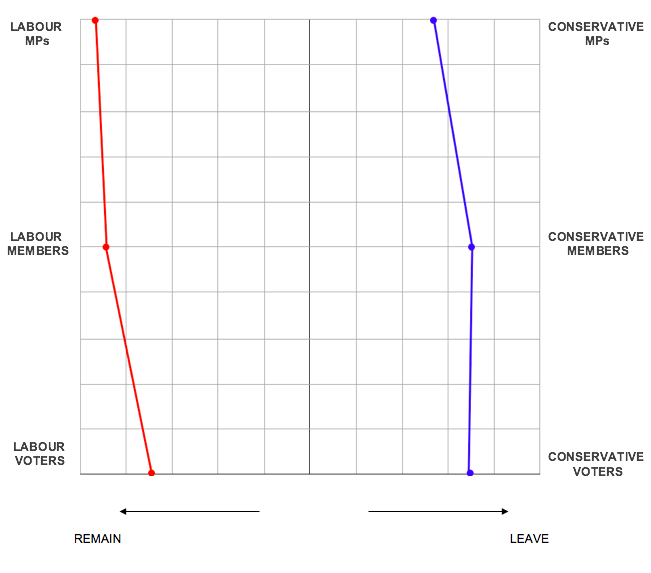 If we go into more detail and look at what members and MPs think about whether we should stay in the single market, then party members and MPs on both sides of the party divide seem to be singing pretty much from the same hymn sheet.

While the questions asked of each group differ, we can reasonably infer that on the Conservative side around three-quarters of MPs want out of the single market, while the proportion of members who want the same is comfortably over two-thirds.  On the Labour side, meanwhile, there’s even greater congruence: only around one in ten MPs and party members think we should leave, with the other nine, in both groups, thinking we should stay.

All of which is lucky for Theresa (if not John) May, although not so much, maybe, when one recalls that polling suggests – perhaps because, unlike MPs and members, they still believe we can have our cake and eat it too – that only around a fifth of Tory voters want out of the single market.

But if this mismatch between their MPs and members, on the one hand, and their voters, on the other, poses a potential problem for the Tories, things could get just as tricky for Labour. Of those members of the public currently saying they’d vote Labour, around two-thirds want the UK to stay in the single market, with just one in ten wanting out of it. 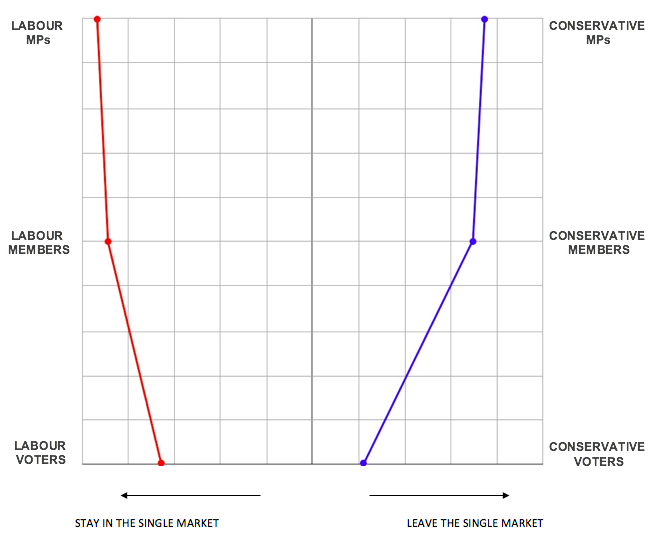 This suggests that Jeremy Corbyn’s (how best to put it?) ‘equivocal’ position on the issue is out of line not just with the overwhelming majority of Labour MPs and Labour members but with the overwhelming majority of Labour voters, too. Sitting on the fence, then, might not be quite as clever as some people seem to think – and it could turn out to be very painful indeed.