The slightly awkward truth? The Tories are still advertising for unpaid internships – in fact, a local Conservative Association placed a job ad for an unpaid campaigns intern this afternoon.

In the last year, the Tories advertised for 11 either completely unpaid or expenses-only internships on the popular political jobs website w4mp. In December 2017, Tory MP Grant Shapps advertised a six month expenses-only internship which involved drafting correspondence to ministers, data analysis, conducting research, and supporting social media. A six-month London-based internship with no pay is estimated to cost a person at least £6,114. At time of publishing, he didn’t respond to our request for comment. 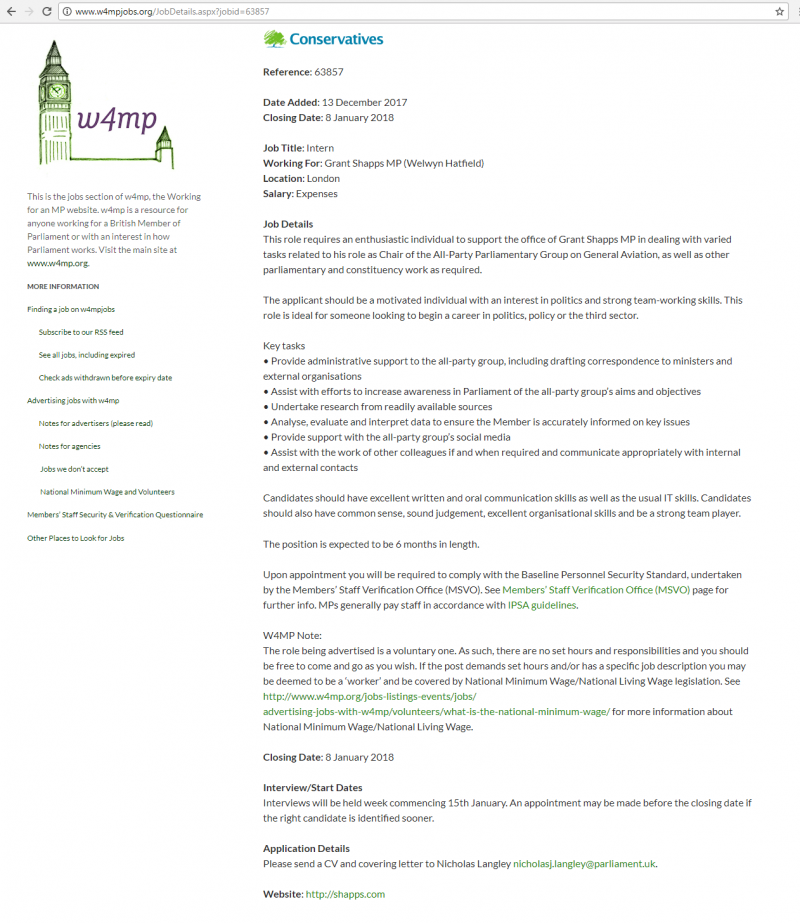 Responding to the Taylor review into working practices, published this week, the government said: “An employer cannot avoid paying someone the minimum wage simply by calling them an ‘intern’ or saying that they are doing an internship.” However, those who are so-called “genuine volunteers” are not entitled to payment.

Campaigners say this volunteer loophole allows employers to avoiding paying for work. Indeed, there are several other similar jobs ads to Shapps’s that are instead billed as ‘volunteer’ roles.

A person must be paid at least national minimum wage if they’re classed as a “worker”, and while there’s no single definition, it’s likely they’ll be classed as such if they have a contract and are subject to sanction if they fail to turn up for work on time.

In 2016 Tory MP Alec Shelbrooke put forward a private members’ bill to ban unpaid internships, describing them at the time as “the acceptable face of unpaid labour in modern Britain today”. The government blocked the draft legislation, instead requesting unpaid internships to be covered in the Taylor review. Unsurprisingly, Taylor recommended that the government should stamp out such working practices, which “damage social mobility”, by improving the interpretation of the law as well as the enforcement action taken by HMRC.

Social mobility charity the Sutton Trust estimates that of 10,000 graduates who work as interns six months after they leave university, a fifth are without pay. They also calculated that an unpaid internship would now cost a person more than £1,000 a month in London and £827 in Manchester, in order to cover rent, bills, food and transport.

The last so-called ‘voluntary internship’ advertised on the popular w4mp website by a Labour MP was in 2016, by the Lib Dems in April 2017. There are no unpaid roles listed by the SNP. (Incidentally, you can complain to HMRC about unpaid internships here.)

In the last three months, HMRC has sent more than 500 warning letters out to employers, reminding them that interns that are classed as workers should be paid at least the national minimum wage. This may be an opportunity to lead by example.

Dulcie Lee is a journalist at BBC Panorama and BBC News.