Writing in the Guardian last week, Dan Roberts and Lauren Gambino argued that Bernie Sanders’ “decisive win” over Hillary Clinton in New Hampshire raises questions about Clinton’s appeal among younger voters and women. For me, Sanders’ win raises even more fundamental questions about how young women experience and perceive the relationship between gender and inequality.  His popularity implies that younger voters, including women, see economic inequality as more important than gender inequality. If that’s the case, what is gender equality about? And what do young women think it is about?

While mulling over these questions, I had the opportunity to hear an icon of French feminist theory – Christine Delphy – speak at LSE’s Gender Institute. Active since the 1970s, Delphy was a founding member of the French women’s liberation movement. With Simone de Beauvoir, she co-founded the still active journal Nouvelles questions féministe and her key message that evening was what it has been since the 1970s: that the primary enemy of women – what keeps us unequal to men — is the system of gender itself.

For Delphy, gender is a patriarchal system that, in subordinating women to men actually creates the unequal social categories of “men” and “women”. It is a hard thing to get your head around.  Despite de Beauvoir’s infamous insight that “one is not born but rather becomes a woman”, most of us take our existence as men or women for granted.

But the French materialist feminists – with Delphy at the forefront – introduced the notion of gender by defining men and women as “classes” of people whose individual existences are constituted through their economic relation within the family.

The French word “femme” means both “woman” and “wife”.  “Homme” means man.  Men have a different word, “le mari,” for “husband.”  Men have an identity outside of the family; women do not.  Women’s economic exploitation within the family is structurally and thus completely embedded in women’s identities.

Feminists in the 1960s and 1970s were well aware that the social construction of gender produces women’s oppression.  But these ideas are nowhere in the news today.

Instead, The New York Times this weekend reports that Hillary Clinton, with the help of Madeleine Albright and Gloria Steinem, have “killed feminism” because they failed to realise that the young women supporting Sanders “are living the feminist dream, where gender no longer restricts and defines your choices, where girls grow up knowing they can be anything they want.” 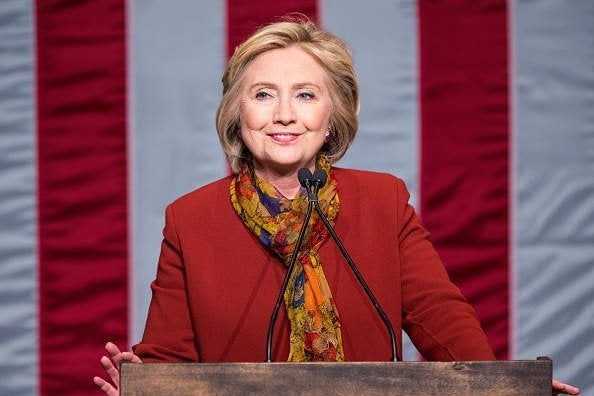 See the woman. Hear the man.

The requirement that “we smile and be cheerful” is, Marilyn French reminds, a ubiquitous features of the world as experienced by oppressed people:

We acquiesce in being made invisible, in our occupying no space. We participate in our own erasure. On the other hand, anything but the sunniest countenance exposes us to being perceived as mean, bitter, angry or dangerous. This means, at the least, that we may be found “difficult” or unpleasant to work with, which is enough to cost one one’s livelihood; at worst, being seen as mean, bitter, angry or dangerous has been known to result in rape, arrest, beating, and murder.”

In The Aftermath of Feminism (2009), Goldsmith’s Angela McRobbie notes that, since the 1970s and primarily in the West, a new sexual contract – what Jean-Luc Nancy calls “the pretence of equality” — has been offered to young women.  In exchange for what a “reinvented feminist politics might have offered,” young women are offered “work-life balance” and “a notional form of equality, concretised in education and employment, and through participation in consumer culture and civil society.”

“Making oneself a woman” today thus requires, in the words of Canadian sociologist Jennifer Carlson, that young women “engage in both masculine- and feminine-marked realms.” Contemporary femininity is defined, therefore, not as a feminist space of resistance or as modeling a range of alternatives but in terms of “having it all”.

We see this new sexual contract “concretised” in young women’s reactions to Hillary Clinton. Their belief that “they can be anything they want” requires them to act as though “gender no longer restricts.”  That Hillary Clinton has the same chance as Bernie Sanders. That feminism is a thing of the past.

Over the last four years, through my work at the Rhodes Project, I’ve spoken with dozens of women who, like Hillary Clinton, and despite their economic privilege, have been affected by a system of gender that they expected would no longer matter.  These women can still be classified as a “group” defined by their relation to men.

During a single week of interviews in New York and Toronto in 2012, for example, three of the seven women I spoke with broke down as they told me about their lives.

A young investment banker wept as she admitted that she and her husband were beginning marriage counseling the next morning because he felt “emasculated” by the fact that she made more than twelve times as much money as he did.

A young lawyer was distraught by her sense that, despite having been made partner, two maternity leaves had made it impossible for her to contribute to her firm in the way that she wished.

A young physician with a small child lamented the lack of opportunity for professional development, now that she found it impossible to travel to conferences. She noted that this was not a problem for any of her male colleagues with children.

Maureen Dowd, in The New York Times, claims that young women have rejected Hillary Clinton because they don’t relate to her.

Like Bill Clinton, the women interviewed by the Rhodes Project are Rhodes Scholars. The “best and the brightest,” they are members of an elite network that no doubt has access to the corridors of power.  But what are they able to do when they get into those corridors?

While some women achieve high leadership positions, they do so by following traditional “male” pattern careers:  they outsource domestic work and childcare.  Most women Rhodes Scholars are more moderate achievers:  to have the long-term relationships and families that their partners (many of whom are also Rhodes Scholars) take for granted, they pull back on their own career expectations. (Blackmon and Rudy, 2014.)

During the discussion period at the LSE event, Delphy was asked for her views on Gloria Steinem’s claim that young women were supporting Sanders over Clinton “because of the boys.”  Delphy admitted that although she hadn’t heard about this, she wasn’t surprised.  We have a “very, very long road” had ahead of us, she said, because the structures that oppress us also shape our desires.

Delphy’s appearance at the LSE last week included the screening of a 2015 film made with and about her life as a feminist entitled Je suis ne pas féministe, mais.” The film opens with the following conversation between Delphy and the filmmaker, sociologist Sylvie Tissot:

Tissot:  Do you think being a feminist makes you happier?

Delphy:  I’d have to have a non-feminist life to compare it to. […] I never thought it’d change my life.  It gave my life meaning but didn’t make me happy.  I don’t exactly know what being happy means.  It’s more a feeling of impatience. If you consider the work still needed and what is still accepted. […] Being angry is not very pleasant.

Tissot:  If you can express it, it can be!

Delphy: I think we need to be angry and women aren’t angry enough.

The very assumption that “woman” means “wife” will have to be rejected before we see any radical change in society.  And in the case of “Mrs Clinton” that meaning, far from being rejected, is front and centre.

Susan Rudy is Executive Director of the Rhodes Project, a London-based charity and research centre that collects data about women who have held Rhodes Scholarships. She is also a Visiting Scholar at Said Business School, University of Oxford.