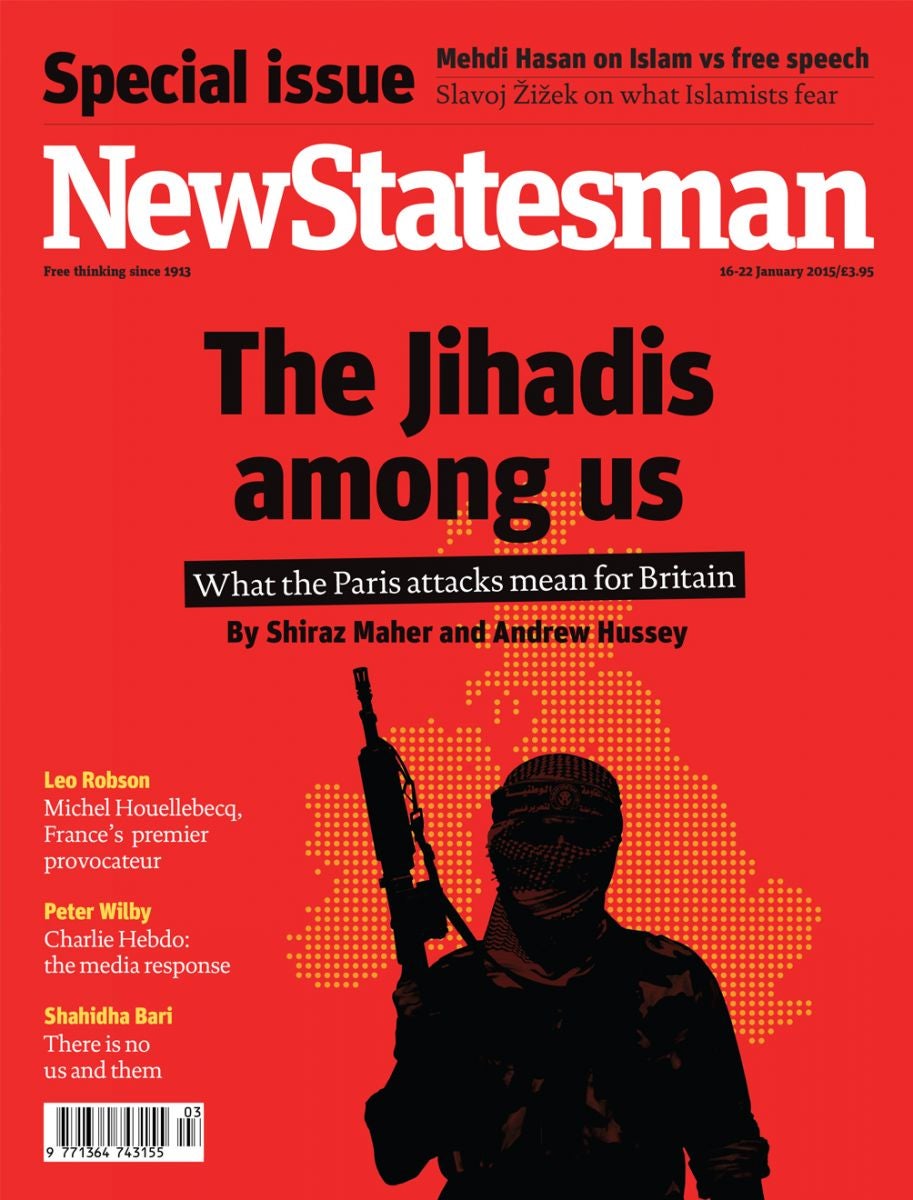 Cover story: “The jihadis among us”

Andrew Hussey and Shiraz Maher consider the long-term consequences of the Paris attacks, in France and Britain.

Shahidha Bari on how there can be no simple, comforting narrative to explain the terror attacks in France.

Mehdi Hasan: “As a Muslim, I’m fed up with the hypocrisy of the free speech fundamentalists.”

Politics column: George Eaton on how the run-up to the election has brought unity to Labour and the Conservatives – but it will not last.

Letter from Paris: Divided by an invisible wall

Andrew Hussey writes from Paris, considering the immediate impact of the Charlie Hebdo attacks on the city:

By this stage, to be living in Paris was like being trapped in some kind of weird nightmare. The killers were on the run. Helicopters buzzed over the city day and night. Nobody could speak of anything else and, when they did talk, it was in a muted way.

Hussey also explores their historical context, including the Goldenberg’s deli attack in 1982, which occurred during one of Hussey’s first visits to Paris:

Goldenberg’s was at the heart of the Jewish district on the rue des Rosiers – which was a lot scruffier then than it is today. Two attackers, who have never been captured, threw grenades and fired with machine guns into the restaurant, killing six people and injuring 22 more. The killing was attributed to the Palestinian terrorist Abu Nidal and his Black September group but no one is certain who did it. The slaughter convulsed Paris – this was, it was said at the time, the worst attack on Jews in France since the Second World War.

Finally Hussey considers how France can move on from these attacks, while “the ghosts of French history” are still “very much present”:

Although the level of violence gets worse, from 1995 to 2012 to 2015, it feels as if there is nothing new in Islamist terror: variations of the same thing keep happening over and over again. It is 32 years since my first encounter with terror at Goldenberg’s deli. In the intervening period, I have researched and travelled widely in what was French North Africa (Morocco, Tunisia and Algeria), trying to work out the complicated love-hate relationship between France and its former Muslim territories. Very quickly, after this month’s killings, I grew tired of the media arguments about censorship, the ignorant statements about Islam and the misunderstanding about the French-speaking world.

There are no easy answers; but what is certain is that the same political and cultural problems are being handed down from generation to generation. For all these reasons, much as we all wanted it to be the case at the march on Sunday, it’s not yet over.

Shiraz Maher argues that the jihadi threat to Britain is real. He details the worrying responses of British extremists to the Paris attacks:

Abu Qaqa, originally from Manchester, tweeted that what mattered was not who murdered the Charlie Hebdo cartoonists, only that they had been killed.

Talking to me on Kik, a chat application for smartphones, Omar Hussain, 27, a former Morrisons security guard from High Wycombe, said: ‘I’m not fussed whether it’s done under the banner of Aqap or Isis. As long as the kafir [infidel] has been killed, that’s what counts. Killing a kafir who insults the Prophet is a praiseworthy deed.’

These are precisely the sentiments that worry Andrew Parker, director general of the Security Service (MI5). In a speech to the Royal United Services Institute in London on 8 January, Parker outlined the tangible and significant threat that Islamist terrorists continue to pose.

Maher also argues that the threat of extremism in Britain is not only growing but changing in a way that makes it difficult to predict:

And while the terrorist threat is intensifying once again, it is also mutating. Jihadi groups are now favouring less sophisticated attacks than before: these are harder to detect and require fewer participants. The most significant strikes on western soil in recent months – in Canada, France and Australia – have all involved gunmen operating either alone or in small groups.

It is almost impossible to stop such attacks. They do not require much preparation and demand little reconnaissance. Guns are also unnecessary; so the relative difficulty of acquiring them in Britain, compared to some other western countries, is no guarantee of security.

Maher insists that we must “learn from the Paris attacks”. He attempts to “analyse the nature and origin of the jihadis’ beliefs”.

Appreciation: A triumph of intellect over adversity

Following the release of The Theory of Everything, Martin Rees, the Astronomer Royal, pays tribute to Stephen Hawking, the scientist who received his “death sentence” more than 50 years ago:

Soon after I enrolled as a graduate student at the University of Cambridge in 1964, I encountered a fellow student, two years ahead of me in his studies; he was unsteady on his feet and spoke with great difficulty. This was Stephen Hawking. I learned that he had a degenerative disease – amyotrophic lateral sclerosis – and might not live long enough even to finish his PhD degree. But, amazingly, he has lived on for 50 years longer. Mere survival would have been a medical marvel, but of course he hasn’t merely survived. He has become the most famous scientist in the world – acclaimed for his brilliant researches, for his bestselling books about space, time and the cosmos and, above all, for his astonishing triumph over adversity.

Stephen’s ‘eureka moment’ revealed a profound and unexpected link between gravity and quantum theory, which predicted that black holes would not be completely black but would radiate in a characteristic way.

Stephen is far from being the archetypal unworldly or nerdish scientist – his personality has remained remarkably unwarped by his frustrations and handicaps.

Rees concludes by considering Hawking’s legacy, which extends beyond the achievements explored in The Theory of Everything:

Tragedy struck Stephen Hawking when he was only 21. He was diagnosed with a deadly disease and his expectations dropped to zero. He has said that everything that has happened since then is a bonus. And what a triumph his life has been. His name will live in the annals of science; millions have had their cosmic horizons widened by his bestselling books; and even more, around the world, have been inspired by a unique example of achievement against all the odds – a manifestation of astonishing willpower and determination.

“It is a great thing that some phases and facets of Stephen’s life have been so well portrayed in The Theory of Everything. Let’s hope that some time there will be another film that depicts his later life and his scientific achievements.

Regular NS cartoonists respond to the attack on the satirical magazine Charlie Hebdo with poignancy, wit and sincerity, including this from Becky Barnicoat: 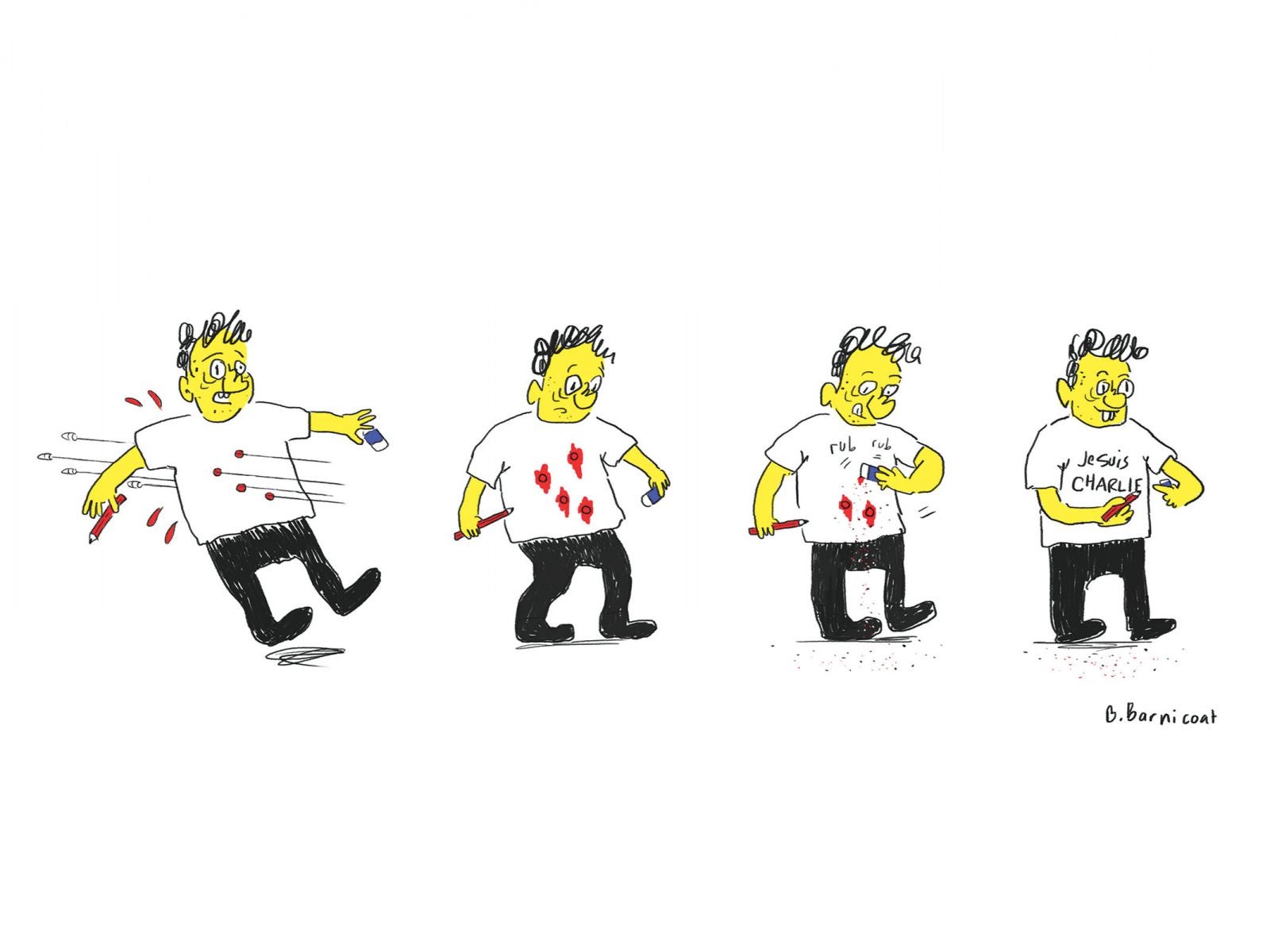 The Guest Column: Shahidha Bari insists that we must reject the “us v them” narrative of liberal democracy and radical Islam

Bari argues that we should take our time to analyse and consider the events in Paris last week:

The drama of the past week unfolded in the kind of hyperreal time that is impossible to decelerate and in which it is hard to think clearly. The accumulation of breathless analysis is indicative of how desperately we seek clarity in moments of crisis and how difficult that is to secure. While the ground of the debate has shifted back and forth (from absolute claims of freedom of speech to discussions of the merits of #JeSuisCharlie, to how we distinguish between Islam and Islamism and how best to rebuke Rupert Murdoch), the names of the dead and the voices of their families have remained a sobering reminder of how unequal we are to the task of understanding these events.

She also makes the case for embracing contradiction, instead of seeking a simple but ultimately insufficient response to terror:

If we accept the possibility of contradiction and complexity, we might assert the absolute right to speak without threat of violent reprisal while also drawing attention to the variegated history of freedom of speech, which is never really ‘free’, even in France, from its historical and social contexts. It is possible to take pride in a society that privileges freedom, but also to refuse to labour under the illusion that free expression is always in the service of good, when often enough it has served the purposes of diminishing different groups of people, not because they warrant it, but because they are somehow undeserving of a shared nationhood.

The Politics Column: George Eaton on how the coming election has unified both Labour and the Conservatives – but it will not last

The NS politics editor, George Eaton, argues that although both David Cameron and Ed Miliband seem to have unified their respective parties ahead of the next election, divisions would soon return once in power:

A party divided against itself cannot stand. In these uncertain times, David Cameron and Ed Miliband cleave to such traditional wisdom. Both men have signalled to their backbenchers that the moment for debate has passed and that they are to act as campaigners rather than as commentators in the months ahead.

Their edicts have so far been heeded. With the exception of the enjoyably intemperate feud between Jim Murphy and Diane Abbott over Labour’s proposed ‘mansion tax’, MPs have fought their opponents, not each other. But the truces are uneasy. Instead of resolving the arguments, Cameron and Miliband have postponed them.

Neither Cameron nor Miliband has succeeded in building up the reserves of strength required to guarantee their survival. For this reason, they should cherish the unity induced by the election. It would not likely survive contact with office.

The Media Column: Peter Wilby asks what our newspapers should do with the Charlie Hebdo cartoons.

Anoosh Chakelian speaks to Middle Eastern cartoonists about the dangers they have faced.

Drink: Nina Caplan wonders what Turner drank after a day of sketching carnage on the battlefields of Waterloo.

Will Self: “Halfway across Westminster Bridge, I witness two men duelling – with selfie sticks.”

Nicholas Lezard: Most people had no idea that 2014 was the “Year of the Bus”. Let’s do it all over again!

The Fan: Meet John, the accountant with 3,000 Bradford City programmes.