How do you make sense of the most unpredictable election ever? We’re trying. For a while now we’ve been tracking all the latest polls – from the daily stream of national polls to Lord Ashcroft’s batches of seat surveys.

The challenge is turning abstract polls into actual seat predictions for each party. There are 650 elections on May 7, not one big one. In the past forecasters would plug polls into a nationwide swing model – usually uniform swing – but such swingometers are limited in a six-party system.

So we’ve developed a simple model. The Greens, Scotland and Ashcroft are now all fully integrated into our prediction, which we make in two steps. First, we work out what the national polls imply will happen in every seat (by using a slightly more sophisticated model than uniform swing), and then we separate any seats Lord Ashcroft has polled.

The Greens, Scotland and Ashcroft are now all fully integrated into our model. Make your own prediction.

He is polling the election’s most marginal – or closely fought – seats. They will decide the election. We plug them into our model, and then adjust them as national polls change.

This two-step process is shown below. You can see the current national polls hand both Labour and the Tories around 230 seats. These are effectively the election’s “safe” seats – excluding Scotland, which Ashcroft is in the midst of polling for the first time. (We now distinguish between GB-wide and Scottish polls, and you can make your own predictions for each.)

We then add in Ashcroft’s polls. He has published 112, and put Labour ahead in twice as many of them as the Tories. 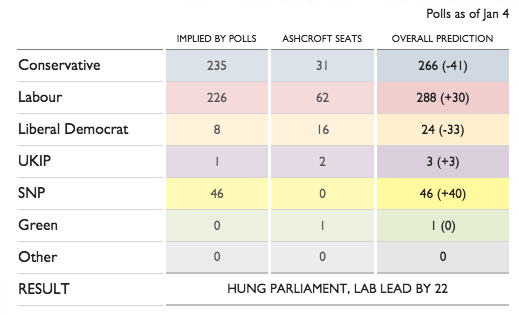 Some pundits, especially Tory ones, have dismissed these leads – a good bulk of which Labour amassed before their faltering end to 2014. But these polls aren’t static; every day they adjust in line with the national polls. If the Lib Dems surge or Tories collapse in national polls, Ashcroft’s seat polls from last summer will change too.

As we have discussed before, we are working with limited data (far more limited data, in a more complicated system, than exists in the US). Without more billionaires, predicting British elections will remain guesswork. And we aren’t replacing other forecasts – we are gathering them all together. You can now stay up-to-date with the predictions of Stephen Fisher, Election Forecast and Electoral Calculus on May2015 – as well as Ladbrokes’ latest odds.

A new academic forecast, from the team behind Polling Observatory, will shortly launch on May2015.

Each model offers something different. Fisher and Election Forecast are predicting what will happen in May. We are avoiding extra assumptions and predicting what would happen in an election held today. As we approach the election, the assumptions built into their forecasts (namely a move towards the Tories) will become less important, and every model will increasingly rely on the polls.

Machines have been predicting elections since the 1950s, when the BBC’s “Ella” and ITN’s “Deuce” computers duelled on election night in 1959. More recently, Nate Silver famously forecast the 2012 US Presidential election, before the New York Times replaced him with their “Leo” computer.

55 years after Ella, we’ve nicknamed our model “Florence”, after the woman who pioneered not just healthcare, but data journalism. Her coxcomb graphs of the Crimean War – made a century before the first BBC election nights – showed how army conditions killed far more British soldiers than conflict did. She was one of the first campaigners to enlist vivid and simple graphics in making arguments. 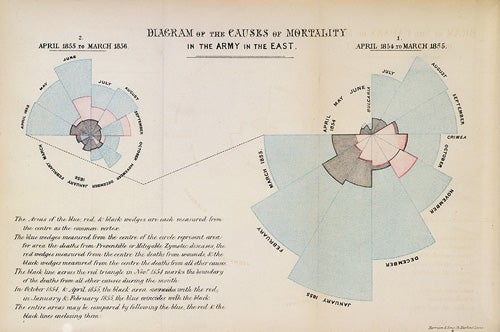