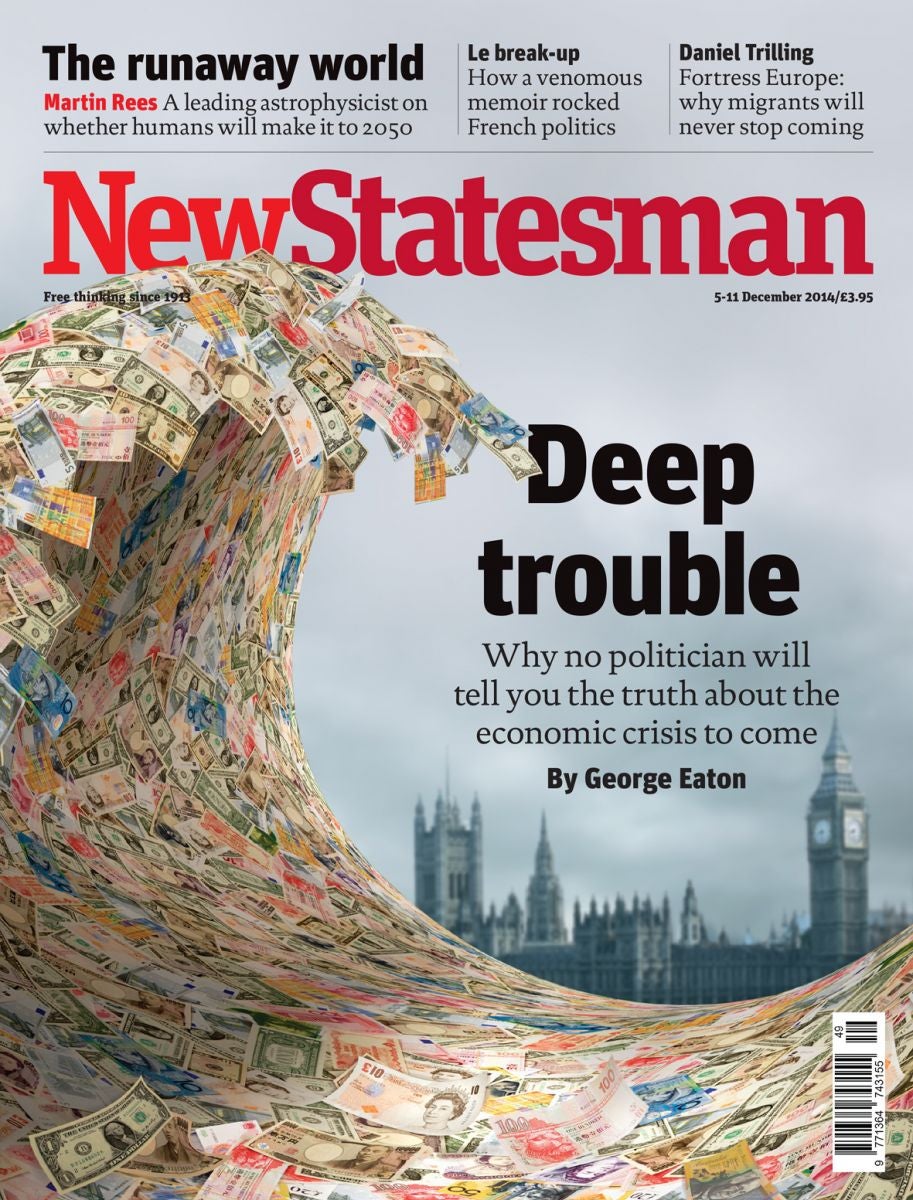 Martin Rees: technology can be mankind’s
saviour or downfall – the choice is ours

George Kynaston: we can tackle the private school
question and improve state education

Mehdi Hasan: you can “point at things and
tax them” and the City should be one of them

The Politics Column: Britain is heading for another parliament of pain but the main parties are in denial

The NS politics editor, George Eaton, argues in his column this week that though Britain is “heading for another parliament of pain” and the main parties speak of “tough choices” ahead, none wants to “itemise the next dose of austerity”:

the truth of Britain’s fiscal situation is now being hidden. In an election as tight as this one, no party wants to break ranks.

By revealing their own pre-election sweetener – a pledge to raise the personal allowance to £12,500 and the 40p tax threshold to £50,000 – at this year’s Conservative conference, Osborne and Cameron moved earlier than most expected. . . The expectation in Westminster is that the Tories’ sweetener will be followed by a post-election sting. Osborne insists that he can eradicate the remainder of the deficit through spending cuts alone. But rather than issuing a “read my lips”-style pledge on tax rises, he has merely stated that he has “no plans” to increase the burden: the exact formulation used before the 2010 VAT rise.

In this week’s Leading Article the NS accuses “all leading politicians” of being “engaged in a conspiracy of silence about the economic decisions that lie ahead”.

The NS Essay: The Runaway World

In this extended essay the Astronomer Royal, Martin Rees, argues that although technology brings hope and presents us with many opportunities to improve quality of life, we should also fear and respect its capacity to destroy us. The threats from novel technology are very real, he writes, for “the global village will have its village idiots and they’ll have global range”:

Millions will one day have the capability to misuse biotech, just as they can misuse cybertech today [ . . . ] In consequence, maybe the most intractable challenges to all governments will stem from the rising empowerment of tech-savvy groups (or even individuals), by bio or cyber technology that becomes potentially ever more devastating – to the extent that even one episode could be too many. This will aggravate the tension between freedom, privacy and security.

The results of releasing dangerous pathogens are so incalculable that bioterror isn’t likely to be deployed by extremist groups with well-defined political aims. But such concerns would not give pause to an eco-fanatic, empowered by the bio-hacking expertise that may soon be routine, who believes that “Gaia” is being threatened by the presence of a few billion too many human beings. That is my worst nightmare. (Most devastating would be a potentially fatal virus that was readily transmissible and had a long latency period.)

Rees warns that “existential catastrophes” need to be taken more seriously and that scientific expertise should be deployed to “assess which alleged risks are pure science fiction and which could conceivably become real”:

“Spaceship Earth” is hurtling through the void. Its passengers are anxious and fractious. Their life-support system is vulnerable to disruption and breakdowns. But there is too little planning, too little scanning of the horizon, too little awareness of long-term risks.

The former secondary school teacher George Kynaston, who in January sparked a debate about education’s “Berlin Wall” with an NS essay co-authored with his historian father David, welcomes Tristram Hunt’s new proposal for a school partnership standard. The shadow education secretary’s proposal, which would require private schools to form “genuine and accountable” partnerships with state schools, is belated but to be welcomed, Kynaston writes:

Hunt’s intervention is bold. He has overcome personal reluctance and ended a damning Labour silence by putting forward a sensible and practical policy. And he has done so at a time when questions of inequality and social mobility are more pressing than ever. It is a promising and much-needed starting point and Tristram Hunt deserves support for it

As a nation, we are capable of dealing with more than one issue at a time. It is a fallacy that attention to the private-school question will distract from improving state education. For 70 years this has been a tired excuse to avoid a difficult problem. Hunt is being constructive: he is not seeking to abolish private schools but rather aims to leverage their resources for other students.

In a special report for this week’s issue, Daniel Trilling traces the clandestine journeys of the thousands of poor migrants who each year attempt to find a better life in Europe:

I went to a hotel in south London to visit Samuel, a gentle-voiced man in his early thirties who came from the city of Debarwa, Eritrea, in the Horn of Africa. I had first met him in August when he was still on the French side of the Channel. Samuel told me that a few weeks after this, in late August, he had walked to a lorry park a few miles outside Calais, near the approach road to the Channel Tunnel. . . Six other Eritrean men were with Samuel that night, which meant they could push one another forward, along the narrow gap that separates the rear axle from the underside of the container above, until they reached the middle of the vehicle. “You couldn’t move your arms,” Samuel recalled, “and there wasn’t much air to breathe.”

In Augusta, a port on the east coast of Sicily, Trilling watches as more than 100 refugees from Syria, Gaza and Somalia, all of whom had survived treacherous journeys across the Mediterranean, are documented by officials. The Italian Navy’s Mare Nostrum search-and rescue operation to save migrants at sea has now ended, however:

the intention was always that it would run for a year as an emergency programme, a stopgap until a rescue operation supported by all members of the EU could launch. But it is unclear whether the replacement operation will focus on saving lives, or on keeping boats out of European waters. The British government’s position is that the rescues should stop, because they only encourage more migrants to attempt the crossing. All of the people I interviewed for this story made their first journey to Europe in a smuggler boat across the Mediterranean. Our government believes that, had any of them drowned, it would have been a useful deterrent to others.

John Bew: the departure of defence secretary Chuck Hagel means the end of Obama’s
hopes for a “team of rivals”

The NS contributing writer John Bew notes that November was a tough month for Obama with the departure of Chuck Hagel, his third defence secretary in six years, as relations between the White House and the Pentagon continue to deteriorate. The loss of Hagel, who served in Republican administrations, represents a serious setback for Obama’s strategy of bringing the opposition into the fold:

During his race for the Democratic nomination against Clinton in 2008, it was widely publicised that Obama was much enamoured with a book by the historian Doris Kearns Goodwin, Team of Rivals: the Political Genius of Abraham Lincoln. In particular, Obama was impressed by Lincoln’s ability to bring former opponents into his team. This seemed particularly important in foreign affairs, which had been the subject of such bitter dispute under George W Bush. In came Clinton as secretary of state. Obama’s appointments of Bob Gates and Chuck Hagel were also symbolic. Both fitted a certain mould. They were Republicans who had served in Republican administrations but who were known to be critical of the excesses of the Bush administration – particularly the war in Iraq – and spoke to Obama’s purportedly “realist” credentials in foreign affairs.

One area of contention between the president and Hagel is reported to have been the latter’s foot-dragging over the closure of Guantanamo Bay, which remains open. What is beyond question is that the latest soap opera is a sign of severe dysfunction. The team of rivals has disintegrated, with many of them becoming a thorn in the president’s side as he limps on for a final two years.

Mehdi Hasan: why we should point at the City and tax it

Following Myleene Klass’s much-discussed clash with Ed Miliband on ITV’s The Agenda, Mehdi Hasan argues that you can point at things and tax them and suggests that the City is a prime target:

“You can’t just point at things and tax them,” declaimed the former pop star Myleene Klass on 17 November, becoming overnight a perhaps unexpected pin-up for the right.

Klass made her comment as part of a longer rant aimed at her fellow panellist Ed Miliband, who wants to introduce a “mansion tax” on properties worth more than £2m. (What’s Klass complaining about? She sold her own home for a very modest £1.8m in 2013.) The Labour leader produced this rather feeble response: “I totally understand that people don’t like paying more in tax.”

Myleene and Ed are both wrong. First, governments can “point at things and tax them” [ . . ] Second, raising taxes isn’t always unpopular. Miliband’s “mansion tax” has the support of 72 per cent of voters, although he omitted to mention that on The Agenda.

Then there’s the financial transaction tax (FTT) – also known as the “Tobin tax” or the “Robin Hood tax” – which has the support of 61 per cent of voters.  . .  It really is a no-brainer: a tax that is popular with the public and backed by the experts and would raise revenue for the UK exchequer, while helping to stabilise a deeply unstable sector of the UK economy. As the 1,000 economists pointed out, an FTT is “technically feasible” and “morally right”. It is, you could say, a tax whose time has come. Even Myleene Klass might agree.

Peter Wilby: public school “partnerships” with the state
sector would do little to reduce inequalities

Books: John Burnside on why Seamus Heaney’s
poetry made the personal political

Letter from Melbourne: S B Tang reports from a
nation in shock at the death of star batsman Phillip Hughes

Amanda Craig on the best children’s books of the year

Will Self: when it comes to Blair-hating I was
an early adopter, but now I feel sorry for Poor Tone