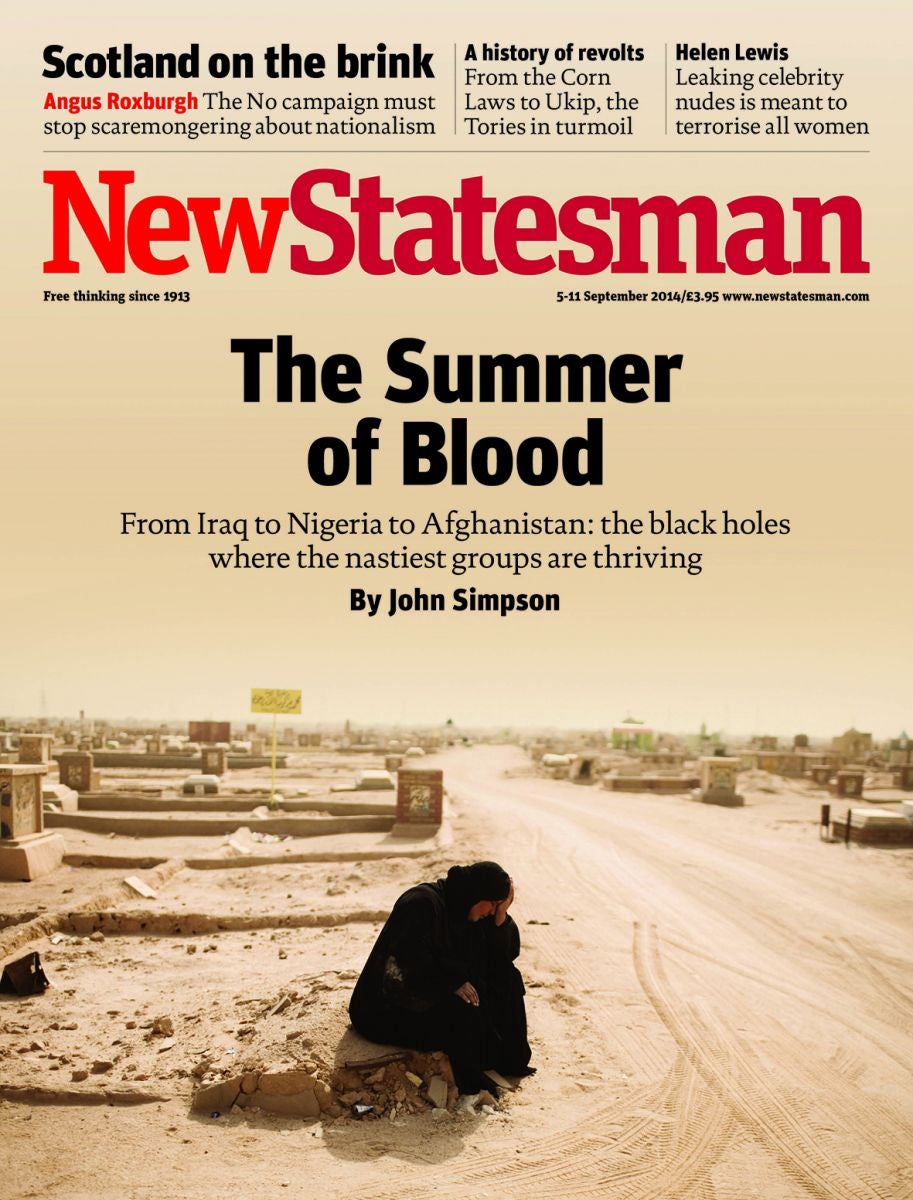 COVER STORY: THE SUMMER OF BLOOD

FROM IRAQ TO AFGHANISTAN: THE BLACK HOLES WHERE THE NASTIEST GROUPS ARE THRIVING

John Simpson: the only credible response is to turn these
places back into proper countries

THE POLITICS ESSAY: THE TORY SCHISM

Tim Bale: From Robert Peel and the split over the Corn Laws
to the Ukip insurgency

DAVID PATRIKARAKOS IN UKRAINE: WHEN ONE SIMPLE MISTAKE
CAN LEAD TO CATASTROPHE

THE POLITICS COLUMN: SPLITS OVER EUROPE SHOW THAT THE TORIES ARE
LOSING – SO WHY DOESN’T IT FEEL LIKE LABOUR IS WINNING?

COVER STORY: THE SUMMER OF ANFAL

The BBC’s world affairs editor, John Simpson, reports from Pol-e Khomri in northern Afghanistan, where he talks to Commander Mirwais, the local leader of Hizb-e-Islami, a Taliban group that once murdered a BBC journalist who was filming with them. “I know all about Isis,” the commander says, using the Arabic acronym for the group – “Daish”:

“If they do, then we are ready to join them. They are great Islamic fighters, and we pray for them.”

If Islamic State (IS) were to begin operating in Afghanistan, Simpson writes, it would be harder than ever for the new government to take control of the country. He makes a connection between the campaigns by extreme Islamist groups across the globe. “They have become fiercer, more brutal and considerably more effective” in Libya, Gaza City (where the IS flag has been flying) and Nigeria, and are able to use the internet to follow one another.

“The more complex the population,” Simpson writes, “the greater the opportunity – especially when the existing government is incapable of defending its minorities.”

Iraq, Syria, Libya, Afghanistan, Nigeria: in one way or another they are all in danger of becoming black holes in which the nastiest and weirdest groups can thrive. The only serious answer is to turn them back into real countries once again. But that takes long-term commitment from outside interests, especially (though not exclusively) the US and Europe. It certainly can’t be achieved by firing off a few rounds of missiles.

THE RIGHTEOUS MIND: STEPHEN GLOVER, CO-FOUNDER OF THE INDEPENDENT, ON THE REAL ENEMIES OF NICK DAVIES

In a vigorous and provocative essay, Stephen Glover, co-founder of the Independent and founding editor of the Independent on Sunday, says that even though he admires the Guardian journalist Nick Davies for exposing widespread phone-hacking by the tabloid press, Davies’s motivation has little to do with victims of the crime. He also argues that it’s a big mistake to regard Davies as an “unvarnished hero”:

Despite his prowess in unmasking wrongdoing, I see him in many ways as a destructive figure, consumed by unreasonable hatreds, whose motivation was not only to expose malpractice at the NoW but also to weaken much of the British press, in which task he has succeeded pretty well.

Davies’s target first and foremost, Glover writes, was Rupert Murdoch, owner of “the Sunday Times and Times and, more especially, the Sun and the now-defunct News of the World”. Glover defends Murdoch’s decision to move his papers to Wapping, because it “gave the press a vital lease of life”, and he tries to debunk the assumption that the media mogul has the power to throw elections:

Murdoch may have backed the winning side in eight successive elections but there is a strong argument that, with the possible exception of 1992, he was simply jumping on a bandwagon that was already heading in a particular direction.

Glover takes his argument further, suggesting that Davies harbours a “near-total contempt for the British press”:

He despises most journalists and hates most newspapers. He doesn’t express a single word of sympathy for innocent Sun hacks hauled out of bed and arrested by the police at the crack of dawn, or for those who have been kept on police bail for many months without charge. Only the Guardian is on the side of the angels, the chief reason being that it does not have to make money, as it has a huge trust fund behind it.

He highlights Davies’s suggestion that the former Observer editor Roger Alton allowed himself to be bullied by the Blair government into supporting the Iraq war: “the most heinous accusation one could make against an editor”. Glover says the idea is based on “shreds of tittle-tattle or hearsay” – perhaps of the same kind that led the Guardian to announce in a report by Davies that the New of the World had deleted messages left on the missing schoolgirl Milly Dowler’s phone, which raised her family’s hopes that she was still alive. The claim turned out to be false but Davies never apologised or retracted.

In his column this week, the NS political editor, George Eaton, argues that the “discipline, pragmatism and ruthless desire to win” that allowed the Conservative Party to govern for 57 years of the 20th century seem to be disintegrating, starting with the defection of Douglas Carswell to Ukip:

That the Tories are convulsed by an issue [Europe] that does not even feature in the top ten of voters’ concerns is a clear sign that the party has lost its winning instincts. Another was the willingness to relinquish the planned boundary changes in return for the abandonment of House of Lords reform. Another still is the decision of so many new MPs in marginal seats (nine) to stand down rather than take their chances with the electorate.

To understand the enemy better, Eaton writes, “GCHQ staff have been ordered to read Revolt on the Right, Matthew Goodwin and Robert Ford’s analysis of the rise of Nigel Farage. But the opposition cannot afford to be sanguine in the face of Ukip’s increasing popularity.

On the micro level, Farage’s party poses an immediate threat in target seats such as Thurrock and a longer-term one in Labour’s northern fortresses. On the macro level, the ascendancy of a party that trades in cynicism and anti-politics creates a culture ever less hospitable to a social-democratic idealist such as Ed Miliband. The Ukip insurgency has robbed Labour of the energy and momentum that ordinarily accrue to an opposition party on the road to Downing Street.

Eaton says that Labour strategists are “alive to the danger of winning the election by default, lacking a mandate for bold change and the popular support necessary to sustain a government through another parliament of austerity”:

“People aren’t yet convinced that we’re prepared to make the changes required. That’s why they’re playing footsie with Farage,” one shadow cabinet member tells me. To others, the Ukip surge is evidence of the need to offer reassurance, above all else, on the issues of the deficit, welfare and immigration.

The tension is greatest in the case of the NHS. The desire to sustain the health service (the issue on which Labour enjoys its largest poll lead) and to carve potent dividing lines with the Tories competes with the fear that a party devoted to reducing the “cost of living” cannot credibly commit to a rise in general taxation. The solution, combined with a definitive and radical policy on tuition fees, will likely form the centrepiece of Labour’s conference.

In her column – Out of the Ordinary – the New Statesman’s deputy editor, Helen Lewis, identifies a common thread in a series of appalling cases of online abuse, often aimed at women involved in the video-games industry. The cases include the leaking of nude photos of female celebrities, most recently the actress Jennifer Lawrence. “This is a form of terrorism,” Lewis writes.

What we are witnessing are deliberately outrageous acts, designed to create a spectacle and to instil fear in a target population. Where Osama Bin Laden watched in approval as every news network endlessly replayed the footage of a plane hitting a tower, the hackers and harassers must feel thrilled by all the carefully search-engine-optimised headlines above articles decrying the latest leaked pictures. It is a function of successful terrorism that the media become unavoidably complicit in spreading the terror. There is no way to report the story without increasing its potency. We cannot stop looking.

It would be hard to design a better echo chamber than a tightly knit, insular internet forum. We already know that groups tend to drift to extremes as members move with the prevailing wind (and moderates leave). Add a dash of alienation and a sprinkle of resentment and you have the perfect crucible for extremist behaviour.

Mehdi Hasan: Why is the Muslim world in thrall to conspiracy theories?

The Science column: Michael Brooks on a dispute about how far away we are
from the stars that is souring transatlantic relations