It’s been a difficult few days for the Labour leader. His party held a distinctly lacklustre annual conference. He forgot the parts of his keynote speech covering immigration and the deficit. The announcements he did make were somewhat overshadowed by Barack Obama’s move to launch airstrikes against Islamic State on Tuesday, and he had to hold back some policy proposals due to devo-max and the West Lothian Question dominating the political debate following Scotland’s No vote.

And now the Sun has run a brutal frontpage, suggesting that he is the only Westminster party leader not to get behind its campaign with Help the Heroes, a UK military charity. 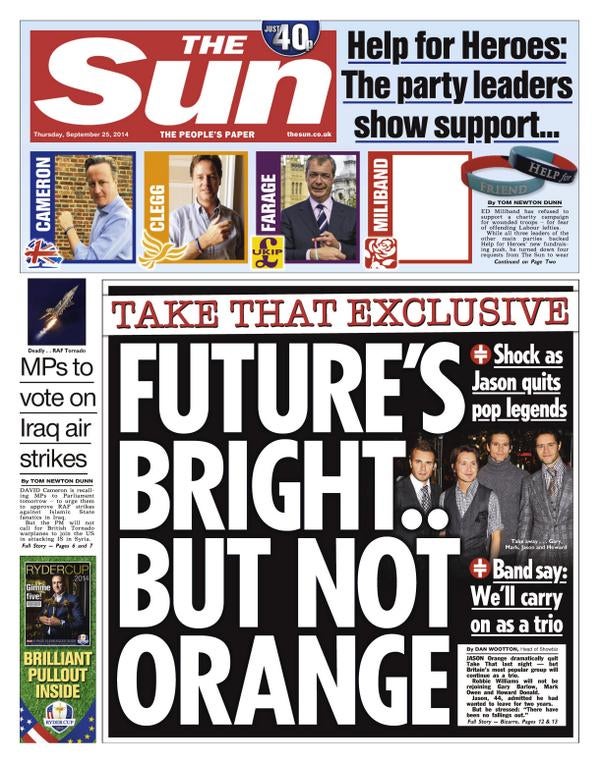 In its story, the Sun claims that the Labour leader turned down four requests to endorse its campaign for Help for Heroes “for fear of offending Labour lefties”. However, the website PoliticsHome has been in touch with a party source who has rejected the story, commenting:

It’s untrue that Ed refused to back the Help for Heroes campaign. He was busy with the Shadow Cabinet discussing how to respond to the ISIL threat in Iraq.

This denial doesn’t quite clear up the details of the Sun‘s exchange with the Labour leader. But it does refer to how crucial Ed Miliband’s response to the west’s increasing involvement in the Middle East’s crisis is. Labour’s reaction is indeed vital to David Cameron – who is recalling parliament to vote on military action tomorrow – because it was Labour’s vote that led to his humiliating defeat on intervention in Syria in August last year.

A spokesperson from the Sun tells me:

Ed Miliband was asked on four separate occasions to pose with the wristband: last Thursday, Monday and twice yesterday. The other three party leaders had their staff take the photos so it would not take any time out of their day. One of those party leaders is the Prime Minister who has also had to decide how to tackle the ISIL threat. Nigel Farage got us back his photo in three hours.

This story highlights the opposition’s need to clarify its attitude towards the country’s favourite tabloid. Miliband, who continues to celebrate his anti-Murdoch stance during the phone-hacking scandal, landed in trouble earlier this year for posing with a special World Cup edition of the Sun. He then made the situation worse by apologising for posing with the paper.

I’ve also heard that some prominent figures on Labour’s frontbench refuse to talk to the paper. Figures like Liverpool-born Andy Burnham and Liverpool Wavertree MP Luciana Berger apparently won’t have dealings with the tabloid. This seems natural, considering their links to Liverpool – where the paper is still pilloried for its erroneous Hillsborough coverage – but nevertheless jars with the fact that, while in power, Labour politicians (including then Health Secretary Burnham) would have conversations with the Sun.

A well-placed party source tells me Miliband’s mixed messages about the Murdoch paper make things “difficult” for MPs like the shadow work and pensions secretary Rachel Reeves, who are attempting to get their tougher messages on welfare into such newspapers.

The paper has been cruel today in playing politics with a charity, and in insinuating Miliband doesn’t support Britain’s troops. But this doesn’t bely the fact that he needs to come to a decision on how he and his party associate with the tabloid, which is the country’s most popular daily.