Leaked plans for New York’s latest skyscraper, the Nordstrom Tower, offer a sneak peek into its intentions to set a few new records. It’ll have the tallest roof in the US, taking that title from Chicago’s Willis Tower. It’ll also be the tallest residential building in the world.

But on one front, it’s showing remarkable restraint. Drawings leaked to US website New York YIMBY show that the building’s total height, including the giant spire atop the roof, will be 1,775 feet. Just three miles away stands One World Trade Center, which stands at 1,776 feet.

When you consider the fact that the Nordstrom Tower’s architects are Adrian Smith and Gordon Gill, who previously designed Dubai’s Burj Khalifa, the world’s tallest building, this lack of vertical ambition becomes a bit mysterious. Is it a sudden fear of heights, perhaps? An oversight? A miscalculation?

Actually, it’s an act of patriotism.

Why Fight Club now has a different ending in China

The US still has significant troops in Europe despite cuts

The height of One World Trade Center, which reflects the year the US declared independence from its British oppressors, was chosen as a statement of US freedom in the wake of 9/11; it thus follows that surpassing this height would be an insult to the tragedy’s victims. (The fact that the Nordstrom Tower’s 1,775 feet therefore represents an America still bound by British rule doesn’t seem to have occurred to anyone.) 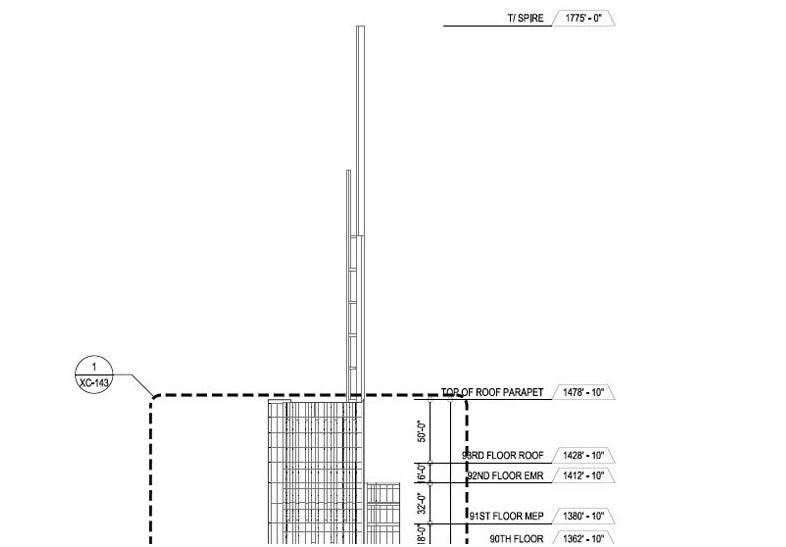 Plans make it clear that the spire will top out at 1775.0 feet. Credit: YIMBY

To be fair to Smith and Gill, a look back at the controversies surrounding the naming of One World Trade Center shows that they were probably right to be cautious. Its original name, the “Freedom Tower”, was axed by the Port Authority as they worried it would be “too political” for potential renters.

Fox News (who else?) accused them of being un-American. George Pataki, governor of New York at the time of the 9/11 attacks, told the New York Daily News that he, too, disapproved of the name change:

It shouldn’t just be, you know, One World Trade Center. It should have a name. And symbolising 1776 and showing the world that we weren’t going to be frightened in the face of these attacks… it all logically came together that the perfect name for this is the Freedom Tower.”

And in case you were wondering, yes, he is directly comparing the British colonial period with the terrorist attacks. Go figure.

The new tower, which will be located on West 27th Street, is named after its owner, the department store Nordstrom’s. It’ll contain a seven floor flagship Nordstrom’s store as well as a hotel and apartments. No concern about names that are “driven by commercial interests” here, then.