The Sun has a strange front page today boasting that a four-year-old boy has the “mark of [the] devil” on his torso: 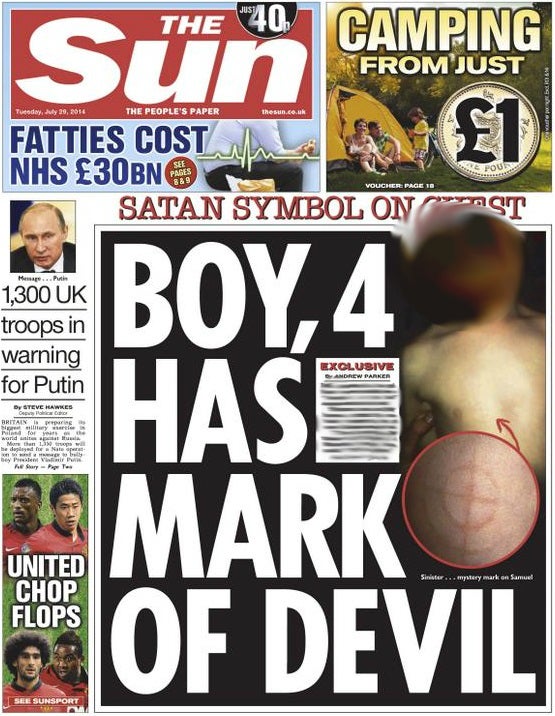 (We’ve blurred the boy’s face, and the text. The story’s elsewhere if you want to read it.)

While the Sun‘s editorial team are probably filing this under the same kooky category as “Jesus in a sarnie“, is that how it comes across?

Let’s accept there is no such thing as the devil, so what is the mark? It looks superficially like something hot and round being pressed against a child’s skin – a hairdryer, or maybe a stove top – although you’d hope the Sun would have excluded that possibility. (It could also be a birthmark, but according to the story it had already faded by mid-June – presumably, the paper has been sitting on this story until a slow news day came around.)

Secondly, fear of satanic possession was one of the motivations for the abusers of Victoria Climbié. Should we really be encouraging the idea that children can have devil’s marks, even as a silly season joke?

UPDATE: The Sun has responded to the Guardian about the story:

A spokesman for the Sun said: “This was a story provided by the parents, who had already publicised the pictures and story on Facebook. We sought to treat it in a lighthearted fashion, highlighting the apparently fanciful link to the occult.

“We are conscious of the code and guidance around paying parents. We did not encourage the parents to embellish or expand the story; it came to us, and had already been the subject of discussion (raised by the parents) on social media.

“It’s also worth noting that no concerns were expressed about the child’s welfare. An unusual mark appears, the mother gets it checked out by a doctor who confirms there is no medical reason why it should be there, and discharges her. Social workers are not involved.”