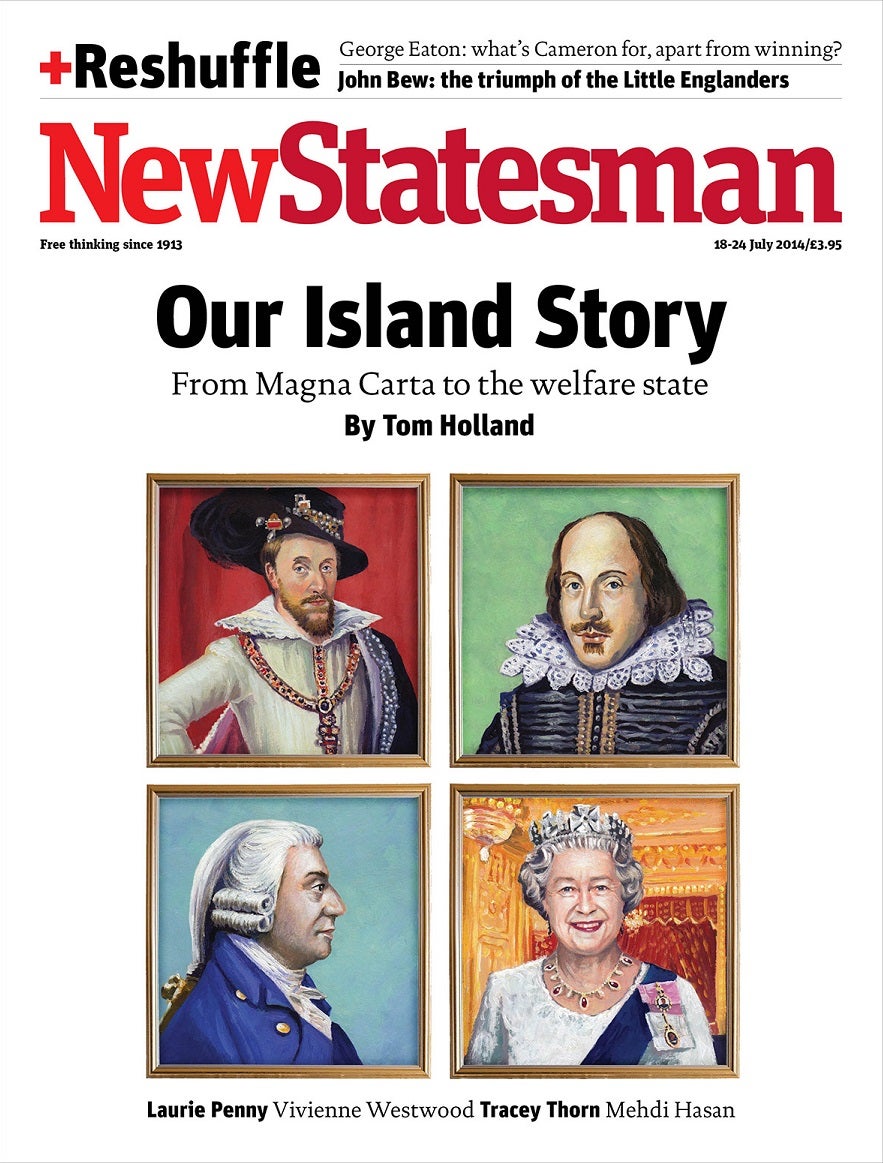 The reshuffle and the rise of the far right

John Bew: “Philip Hammond’s appointment as Foreign Secretary is a triumph for capable functionaries and l”

Leading Article: The Cameroon dream fades as the new right continues to rise

Our Island Story: The historian Tom Holland on the long journey to Anglo-Scottish union

Anthony Barnett: the Emergency Surveillance Bill is about power, control and policing – not protection

David Selbourne: with socialism defeated, the left must replace self-regarding libertarianism with a sense of civic belonging

Mehdi Hasan: the assault on Gaza has been a humanitarian disaster, yet the west’s staunch support for Israel continues

Reshuffle: the Cameroon dream fades with the rise of the new right

Reflecting on this week’s reshuffle, our leading article argues that though the exercise was “superficially described as a ‘women’s reshuffle’ ”, there has been “a much more important shift in representation within the cabinet” as a result of David Cameron’s changes: a rise of the ideological and Eurosceptic right:

Out went many moderate or One-Nation Tories – the “wets” of old. In their place are younger, more ideologically driven politicians such as Liz Truss, the new Environment Secretary, who was one of the co-authors of the neo-Thatcherite manifesto Britannia Unchained. The intellectual momentum in the Conservative Party is with the new right, represented by Ms Truss, Sajid Javid, Matthew Hancock and Priti Patel. They are, like George Osborne, committed to an arid, small-state, free-market conservatism. Would that a Burkean such as Jesse Norman had a place in the cabinet.

In the Politics Column, the NS political editor, George Eaton, argues that Michael Gove’s demotion to Chief Whip or “minister for the Today programme” is the result of the Conservative campaign manager Lynton Crosby’s pursuit of a “remorseless logic” of “Will it help us win?”. Gove’s removal from the Department for Education, argues Eaton, is “the clearest example of the defining stratagem of the reshuffle: the subordination of governing to campaigning”. But apart from winning, what does Cameron stand for, he wonders:

“This wasn’t Cameron’s last reshuffle, it was Lynton’s [Crosby’s] first,” one Conservative MP told me. Under the aegis of the Australian strategist, the previously shambolic Conservative Party is being moulded into a disciplined war machine that Tory MPs believe is capable of routing Labour next May. Optimists on the Tory side and pessimists on the Labour side maintain that “the fundamentals” – economic competence and political leadership – favour the Conservatives. But as he and his new cabinet approach the battlefield, the Prime Minister should ask himself what he now stands for, other than a desire to win.

John Bew sees, in the appointment of the “cold-eyed cost-cutter” and Eurosceptic Philip Hammond to the post of Foreign Secretary, a triumph for “capable functionaries” and “Little Englanders”. Bew argues that Hammond’s selection is entirely at odds with the “illustrious and tempestuous” history of the Foreign Office, which, he points out, can be traced to an 1809 pistol duel between Lord Castlereagh and George Canning:

Hammond’s elevation represents . . . the triumph of the tinkerer over the thinker. He brings with him no clear philosophy of Britain’s place in the world, nor any proven depth of interest in foreign affairs. Hague’s tenure, though not without its critics, brought a reinvestment in the Foreign Office as an institution. Under the “Diplomatic Excellence” initiative, he emphasised the importance of restoring language training and a sense of historical and institutional memory. He was unquestionably a big beast.

In this long read, the historian Tom Holland traces the early histories of England and Scotland and their journey towards union in 1707. From Magna Carta and the Declaration of Arbroath to Boswell and Johnson, he considers the cultural and political ties that have bound England to Scotland and vice versa, and formed a British identity.

Under Charles I, the Protestantism that was the shared legacy of the Reformation in the two countries began to set them at each other’s throat. In Scotland, Charles’s attempt to impose the Anglican Prayer Book precipitated in 1638 a particularly startling exercise in popular democracy, as congregations across the kingdom swore to uphold a “National Covenant”, “against all sorts of persons whatsoever”.

This, naturally, cast the Scots themselves as a Chosen People – a conceit so invigorating to Scottish morale that over the following decade entire armies of Covenanters ended up intervening directly in England.

To those resentful of the nation that came officially into being on May Day 1707, it was a terrible false turn. That the contours of the constituent elements of the United Kingdom still remain so clearly distinct and defined, three centuries on, has encouraged some, particularly in Scotland, to cast British identity as a kind of knotweed: alien, invasive, positively demanding to be uprooted. It is this, no doubt, that gives to so much nationalist rhetoric its decidedly 17th-century flavour. Lurking behind many of the arguments in favour of Scottish independence lurks a presumption – sometimes left unspoken, sometimes not – that the Scots are a blessedly egalitarian and moral people, denied their chance to establish a social-democratic paradise only by evil neoliberals south of the border.

the Tories stalk the nationalist imagination as equivalents of Charles I, then the Yes campaign, with its fulminations against the iniquities of London bankers and the bedroom tax, has more than an echo of the Covenanter movement. There is mileage still to be had in appealing to the Scots as a chosen people.

In his Lines of Dissent column, Mehdi Hasan argues that it’s time Israel’s friends in the west stopped singling the country out for special treatment. Hasan observes that “Operation Protective Edge has been a humanitarian disaster for the residents of Gaza” which, if perpetrated by the likes of Syria or Iran, would have been decried by western leaders:

Israel is “singled out” today but by its friends and not just by its enemies. It has been singled out for unparalleled support – financial, military, diplomatic – by the western powers. It is indeed, to quote [Shlomo] Ben-Ami, a “special case”.

Which other country is in receipt of $3bn a year in US aid, despite maintaining a 47-year military occupation in violation of international law? Which other country has been allowed to develop and stockpile nuclear weapons in secret?

Power, not protection: Anthony Barnett on the Emergency Surveillance Bill

In a special report, Anthony Barnett argues that the “emergency” Data Retention and Investigatory Powers (Drip) Bill, which becomes law on Thursday 17 July, is a “legislative scam”:

Drip is a perfect example of the great propaganda feat of the early 21st century: the idea that the creation of the surveillance state is about opposing terrorism and crime and that this is being done at great effort for our sake by selfless spies and administrators, concerned only with protecting us regular folk from the evil that would be done to us.

Who will now be empowered to demand access to the material covered by Drip? Plod, Plod and Plod. The inner sanctum of GCHQ may be able to call up the history of your web searches anyway. Soon, in the service of public order, the Met will be able to demand social media metadata, as well as telephonic information. Does this make you feel safer?

David Selbourne: the socialists blew their chance – the left needs a new idea of progress

The political philosopher David Selbourne argues in the NS Essay that, with socialism defeated and the market society triumphant, the left lacks a coherent idea of what progress means:

It has only a ragbag of causes and issues, rational and irrational, urgent and idle: a politics of personal rights and “lifestyle choices”, of anti-racism and environmental protection, of multicultural separatism, individual identity and gender, and much else besides.

Selbourne believes that the left’s path to progress is to replace its “self-regarding libertarianism” with a sense of civic belonging:

It is a civic consciousness, not a class consciousness, that we need. Pluralism, yes; but we are citizens before we are Christians, Jews, Muslims, or freethinkers.

That is the true centre ground, or foundation, on which state, civil society and nation stand; indeed, a lively and popular sense of nation is a valuable source – among others – of identity in dangerously identity-less times. Above all, to rescue our sense of civic belonging and obligation from the self-regarding libertarianism and anti-“moralising” of the phoney progressive is the work of true progress, if the far right’s hankerings for a “new order” are to be countered.

In the Critics section this week, Mark Lawson meets the designer and campaigner Vivienne Westwood as she prepares for a joint event on fashion and activism with Frank Hewetson, one of the “Arctic 30” Greenpeace protesters, at Latitude this weekend.

Westwood, “who is wearing knee-high socks of yellow and purple, with the word CLIMATE in capital letters on the right leg and REVOLUTION on the left”, talks to Lawson about her anti-fracking campaign, Julian Assange’s dress sense – and why people who care about news should never read newspapers.

“Julian quite likes a combat-type look,” she explains. “I’ve seen him wear that. If there’s a party at the embassy, he’s got this outfit he wears that’s a bit camouflage. Ben’s [Westwood’s fashion designer son] line is sort of inspired by Clint Eastwood in spaghetti westerns and someone said to him: ‘Can we approach Julian Assange?’ I think it was a marketing thing. It’s really good of Julian to do this because it’s probably going to bring out this women’s lib thing of him somehow being a rapist when he has never ever been charged with rape.”

“Yes, I do. Well, I haven’t been for a bit because I’m so busy. And you can’t turn up and just knock on the door. I’m going soon with Pamela Anderson [of Baywatch fame], actually. She’s coming over to see me and one of the things she asked me to do was to arrange to see Julian.”

On sustainability and activism:

“You can’t have a sustainable fashion business . . . I’m not trying to be a holy person.”

“I would love it if people thought: ‘This is the woman who stopped fracking in this country.’ That would be absolutely amazing.”

On “thinspiration”, skinny models and the fashion industry:

She says she is increasingly interested in “folk costume” of the past, for the intriguing reason that “everyone is getting fatter. And so tight clothes don’t really look very good. But folk clothes – the dirndl and so on – are flattering.”

But while Westwood is undeniably right that most people are getting fatter, one area where they notoriously are not fat is the fashion industry. That morning, newspapers had reported another controversy over so-called thinspiration pictures of gloatingly skeletal models and other celebrities.

“Well,” says Dame Vivienne, “thin models look better in clothes. We’ve all discovered that. I’ve just read a book about Coco Chanel and the writer makes the point that, with the rise of photography, it was realised that skinny people looked better in pictures. Chanel kept skinny. You’re asking: ‘Are models getting skinnier?’ I think models tend to be young and, when you are young, you are skinny, usually.”

From Pasternak and Joyce to Rushdie: Leo Robson on literary censorship

Caroline Crampton at the Proms: Military music and anthems for doomed youth

Jonathan Wilson in Brazil: After the World Cup final, the streets of Copacabana ran with urine and the bars ran out of beer

Philip Maughan on the rediscovery of Breece D’J Pancake, a “hillbilly” from the US coal belt with a precious talent