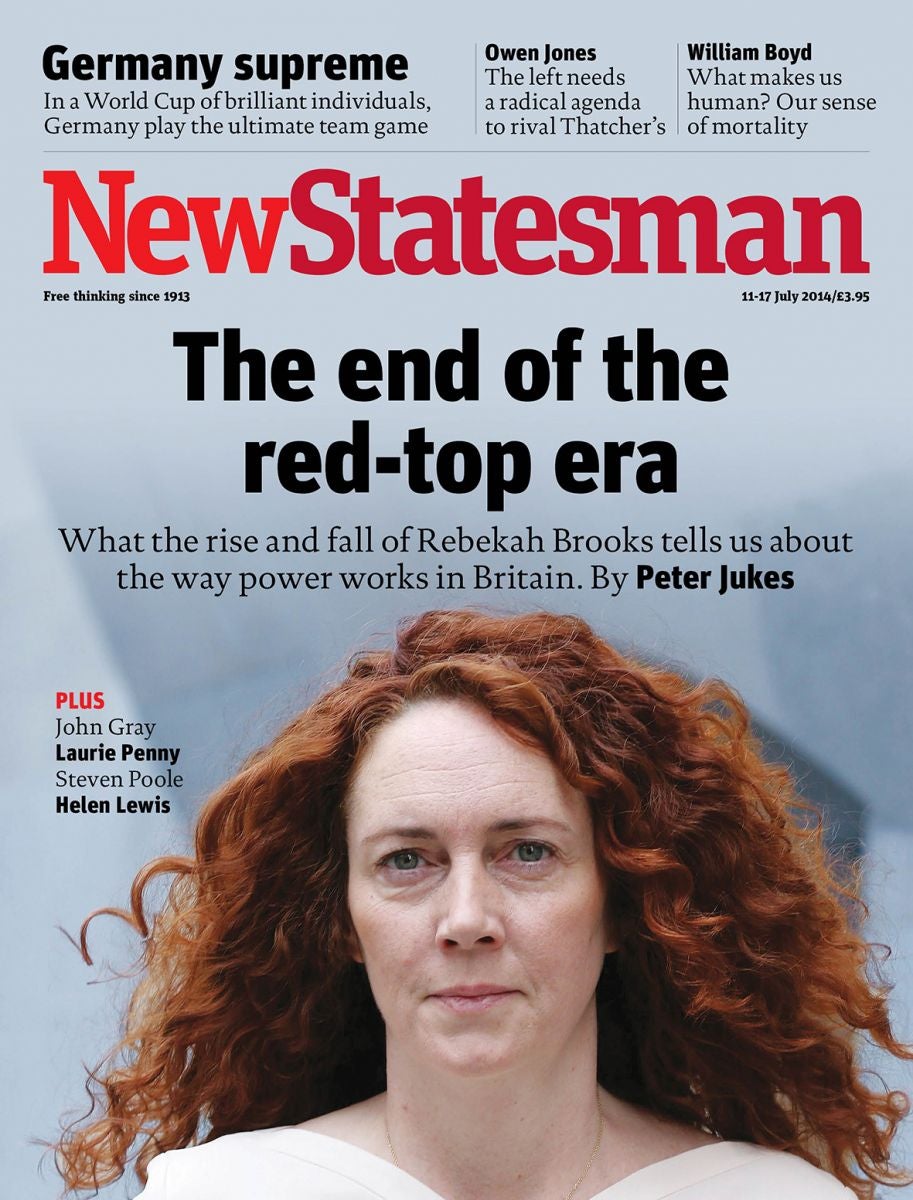 Rupert’s red top: the rise and fall of Rebekah Brooks

Laurie Penny: will the victims of child sex abuse ever get justice – or just another cover-up?

Leading article: without a two-state solution, Israel is set on a course of war

George Eaton: Labour has to be clear that money for the NHS will lead to cuts elsewhere

Adam Tomkins on the rise of the centre right in Scotland

John Gray on the resurrection of Stefan Zweig, literary exile

Pixel perfect: Helen Lewis on the digital revolution in art

The TV drama screenwriter, author and freelance journalist Peter Jukes, who live-tweeted all 138 days of the phone-hacking trial, considers the rise and fall of Rebekah Brooks and what her career tells us about power. For eight months, Jukes looked on as Brooks maintained extraordinary composure in the witness box. By the end of the trial, he notes, “it felt as if the whole courtroom had become her friend”.

However, those who worked with Brooks saw a very different side to her character. A senior Westminster insider tells Jukes: “If you weren’t useful to her, she was an utterly ruthless and tyrannical enemy.” And a former agency photographer, Gary Wolens, who worked for the News of the World in the 1990s, describes her as the most “unpleasant” journalist he has ever worked with:

“She was a bit of a bugger,” he says: “in fact, a nightmare on all occasions.” She once told Wolens to meet a male News of the World reporter to get incriminating pictures of an England footballer. They managed to infiltrate a private party at a pub in Billericay where strippers appeared and engaged in sex acts with the partygoers. But at the crowded, raucous lock-in, there was no way he could get out his camera without putting himself in danger. When Wolens finally escaped from the function room at 1am to update Brooks, she hit the roof. “She called me a ‘lying c**t’,” he says. “She told me I’d never work for the News of the World again.” However, the Sunday tabloid ran an exclusive the next day with him and the reporter as witnesses. “I’ve worked with dozens of picture editors, journalists and editors since,” Wolens says, “but none of them was ever as unpleasant as Rebekah.”

What will Rebekah Brooks do next? Jukes suggests that Murdoch, “hemmed in by lawyers and other lawsuits, and not in such great health”, may not even have the ability to reinstate Brooks in high-level management. But Jukes struggles to imagine her living in retirement and obscurity:

It’s hard to imagine the woman I saw day after day at the Old Bailey settling down as a housewife in rural Oxfordshire at the age of 46. She has spent most of her adult life in the media, at the centre of political events and close to prominent people; and although the past eight months were stressful for her, you could also see she enjoyed telling her story. A life of rural obscurity would bore her. (Richard Bean’s new play Great Britain, at the National Theatre in London, which is loosely based on the events at News Corp, finishes with its protagonist hosting her own Oprah Winfrey-style chat show on American television. But although that might have suited Piers Morgan, Brooks has never been naturally confrontational.)

LEADING ARTICLE: WITHOUT A TWO-STATE SOLUTION, ISRAEL IS SET ON A COURSE OF WAR

As the Israeli government considers mobilising for another land invasion of the Gaza Strip, the NS leader argues that without a two-state solution Israel is heading for war:

So fragile is the “peace” between Israel and the Palestinians that it takes the smallest spark to light the fuse of war. Against this backdrop, the kidnapping and subsequent murder of three Israeli Jewish teenagers whose bodies were found not far from the town of Halhul, near Hebron in the occupied West Bank, were always going to have dire consequences.

Israel’s prime minister, Binyamin Netanyahu, specialises in overreaction: in response to the senseless murder of the three youths and the resumption of missile attacks on southern Israel from inside Gaza, he launched a new offensive against Hamas, the ludicrously titled “Operation Protective Edge”, and, as we went to press, was mobilising for another possible land invasion of the blighted strip. Attacking Gaza might halt rocket attacks in the short run but will do nothing in the long term, except revive Hamas’s faltering reputation as the focus of Palestinian resistance.

The NS columnist Laurie Penny asks, “What price political stability?” as long-standing rumours that senior members of the political establishment abused children in the 1980s are finally broadcast in the public domain, and Home Secretary Theresa May announces an inquiry:

The question now is not whether it happened, but how much of it went on. The question is who knew about it, and who helped to ensure that survivors were not believed, that evidence was suppressed. The question is: if abandoning children to rape, violence and abuse is the price of preserving public faith in the establishment, what sort of establishment have we got, and what is our faith worth?

What happened at Grafton Close [a children’s home]? What happened at the nearby Elm guest house in Barnes, south-west London, that notorious “boy brothel” patronised by diplomats and spies? Most of all, what makes a person feel that his power entitles him to abuse children, to assault young girls and boys, not just with impunity, but with the luxury of access to the very institutions designed to protect the vulnerable – hospitals, care homes, orphanages? What kind of culture harbours politicians who believe the privilege of office extends to privilege over the bodies of the young, poor and powerless?

THE POLITICS COLUMN: IF THE NHS IS LABOUR’S PRIORITY IT MUST REVEAL WHAT IT WOULD CUT INSTEAD

In the Politics Column this week, the NS political editor, George Eaton, observes that since David Cameron has apparently evaded any damage to his reputation from Andrew Lansley’s messy National Health Service reforms in 2012, Labour’s objective during parliament’s summer recess must be to “establish the Prime Minister as the guilty man” and to chart the “Cameron effect” on A&E waiting times, the cancer treatment target and GP availability.

The party cannot pledge to spend more on the NHS, however – unless it can point to cuts it would make elsewhere:

[Andy] Burnham has long signalled that he does not believe an increase in NHS funding can be justified until health and social care have been integrated and all potential savings have been achieved. He is focused on securing the money needed to support his scheme, potentially through a 10 per cent levy on all estates. But while the long-term savings from integration are estimated to be as high as £6bn, health professionals believe a short-term injection of funds is essential.

“The language of priorities is the religion of socialism,” declared Nye Bevan, the father of the NHS. The only way for Labour to square the fiscal circle may be finally to reveal the austerity it would impose elsewhere in order to release resources for the health service.

Few in Westminster fully comprehend the budgetary horrors that await the next government as ministers, having trimmed Whitehall of fat, are forced to cut into bone. If Miliband is to offer himself as the saviour of the NHS, it is the language of priorities that he will need to speak.

Lucy Fisher meets Yvette Cooper as she prepares Labour’s detailed legislative proposals to protect women from abuse and harassment. The shadow home secretary explains that the plans will include “national standards in the criminal justice system, a new commissioner to cover domestic and sexual violence and wider issues of women’s safety, and compulsory sex and relationships education in schools”.

Cooper tells Fisher that violent pornography and online misogyny are her particular concerns. She reveals that her fight against the abuse of women and gender-based discrimination in the workplace has been informed by her own experience:

Speaking in her Westminster office, Cooper explains to me why she has taken up the fight against the abuse of women, dealing with issues from safety for women at work to rape, domestic violence and female genital mutilation. One prompt has been the new online culture of misogyny. She says that she is frequently trolled on Twitter, though she is quick to add that she has suffered nothing like the “awful” attacks – including rape and death threats – that have beset the campaigner Caroline Criado-Perez and Cooper’s fellow Labour MP Stella Creasy.

Cooper is also concerned about the return of gender-based discrimination in the workplace. She points to the widespread reversal of flexible shifts that allow mothers to fit childcare around work. Asked whether she has ever suffered discrimination, she says, “I had problems the second time I took maternity leave, which was to do with the way the civil service responded.”

WILLIAM BOYD: WHAT MAKES US HUMAN?

William Boyd is the latest contributor to our “What Makes Us Human?” series, published in partnership with BBC Radio 2’s Jeremy Vine show. The bestselling author suggests it is our awareness of our own mortality that sets us apart from other species:

I am convinced that what makes our species unique among the fauna of this small planet circling its insignificant star is that we know we are trapped in time, caught briefly between these two eternities of darkness, the prenatal darkness and the posthumous one. That consciousness we possess – that this is it, that the time we have on earth is not a dress rehearsal for immortality in some notional heaven, nirvana or paradise – is hard-wired into our very being at an elemental and immovable level.

Melissa Benn on Laurie Penny and the new feminist pessimism

Darius Guppy: Iranian culture is the antidote to both Wahhabi Islam and western capitalism

Peter Wilby on a very British “cover-up”, the pathetic truth about the Isis crisis and the Tour de France in Epping

Real Meals: Will Self considers the crumb, the humble food particle that contains a universe