Until now, Nottinghamshire’s greatest claim to fame was Robin Hood. This week, however, the East Midlands county swept to world renown, when a large chunk of it was revealed to be the twelfth most congested area in Europe or North America.

The survey, conducted by INRIX, a traffic information service, placed South Nottinghamshire above New York, Rome, Boston and Birmingham in its ranking of most car-clogged metropolitan areas. (No, we wouldn’t call it a metropolitan area either. We’ll get to that in a second.) Here’s the top 15: 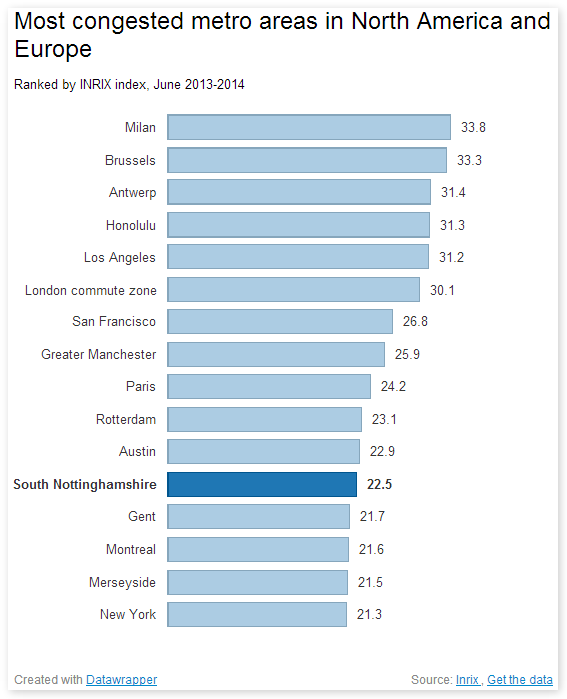 The Nottinghamshire press were understandably nonplussed by the news, especially since the area was placed 33rd in 2011-12, and 27th in 2012-13. The Nottingham Post reported that the results have been “questioned by transport figureheads”, namely the chairman of a taxi association. It also quoted Councillor Jane Urquhart, who pointed out that major works on the M1 and A453, which together form the main route into Nottingham, have slowed down traffic a lot in the past year.

There could be other explanations for the anomaly. INRIX only considers traffic on “major motorways and arterials”. The only motorway in South Nottinghamshire is the aforementioned M1, which skirts the edge of the county for about five minutes: those road works will therefore have had a disproportionate effect on the survey.

Another explanation is that INRIX used Eurostat’s UK metropolitan boundaries, which lumps pretty much the whole county into one “metropolitan area”. The Office of National Statistics, on the other hand, uses something called “urban areas” which stop once a minimum population density is reached. It consequently defines Nottingham’s urban area as Nottingham, plus a few suburbs: this seems like a better point of comparison with NYC than the entire southern part of the county, which is mostly grass. 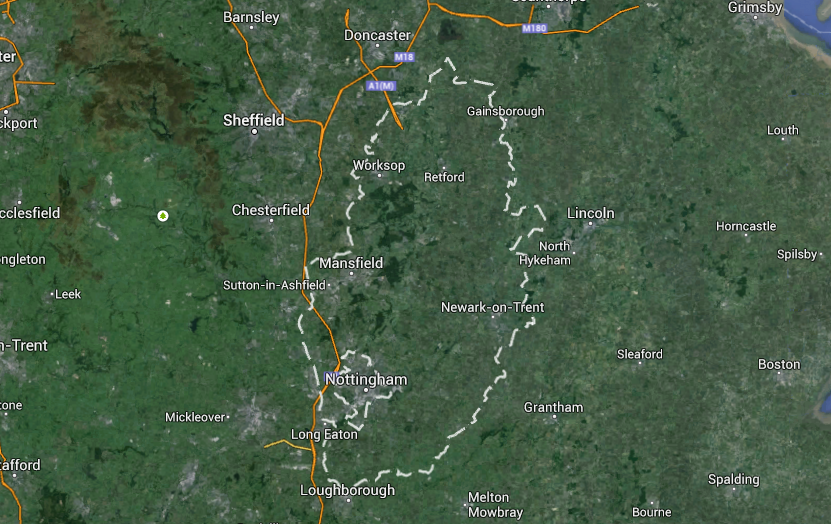 The reason this is a problem is because INRIXs’ ranking is based on the difference in traffic speeds between rush hours and “free-flow” periods – and true metro areas have very different traffic patterns from more rural ones. In New York City, for example, the roads are so busy that peak time traffic is often not that much worse than general traffic. In smaller cities, peak time makes a big difference.  All the index really shows is how much more congested an area gets at commuter time. If traffic is terrible all day, then the answer may be “not much”.

Happily for Nottingham, then, its leap into the big-time seems to be a fluke. Works on those major roads will carry on until 2015 though, so the locals may be stuck in that traffic jam a little longer yet.