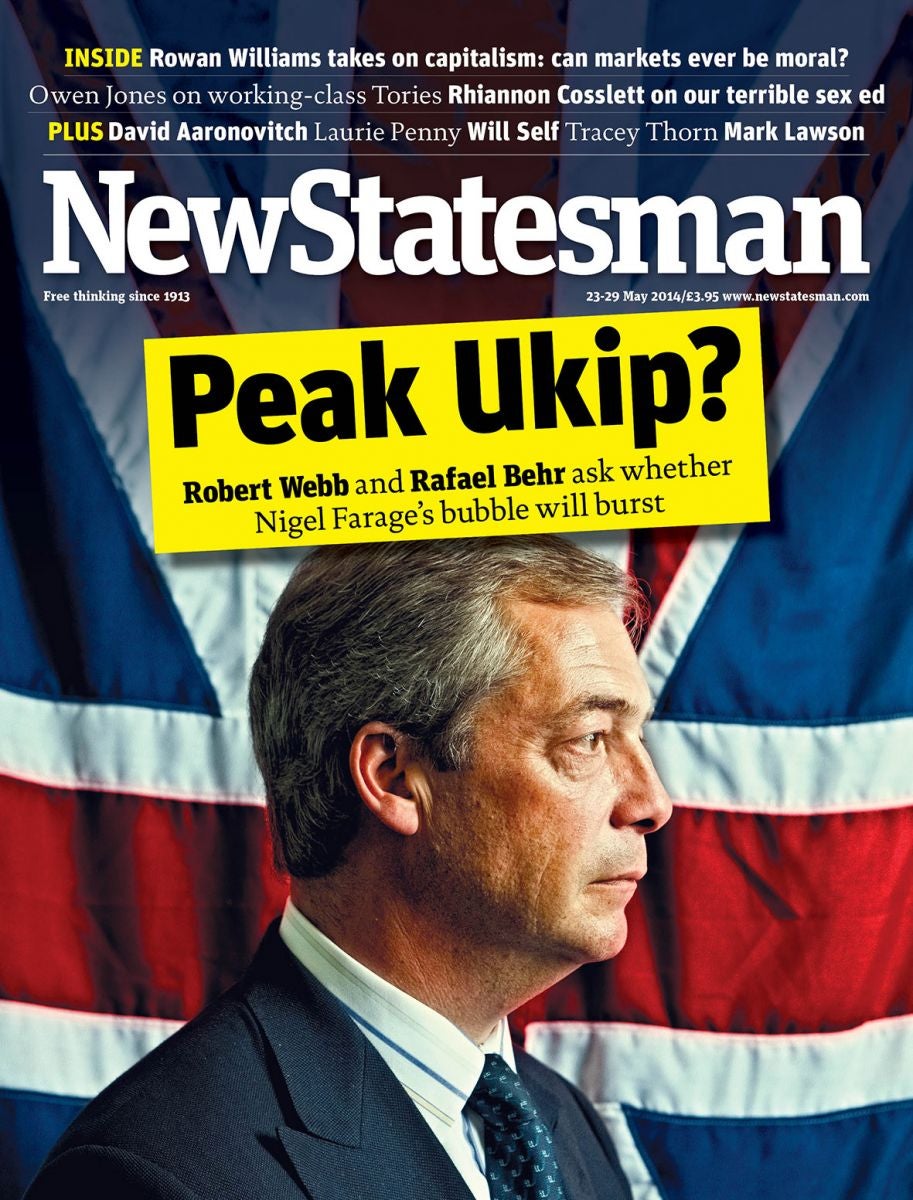 Rowan Williams: the former Archbishop of Canterbury on whether markets can ever be moral

Owen Jones on the rise and fall of the working class

Laurie Penny on reality TV and the Royal Family

Sophie McBain on the unstoppable rise of Poundland

Ed Smith on the language of football

Will Self: I miss smoking in public

Cover story: Ukip is winning the “f*** you vote in a f*** you election”, says Labour strategist

Have we hit Peak Ukip? In our cover story this week, Rafael Behr looks at the far-reaching consequences that the rise of the UK Independence Party has had for all the other parties. Of the Conservatives, he writes:

On the Tory side there is growing confidence that Ukip support can only decline as the party acquires a disreputable air. The source of many press reports that embarrass [Nigel] Farage is Conservative Campaign HQ, where researchers scour pamphlets and social media for unsavoury remarks by Ukip candidates. Tory strategists recognise that undermining Farage is a job best undertaken at arm’s length. Too many direct attacks by Cameron would lend Ukip the status of equal adversary and risk reminding Tory dissenters of the times they have felt insulted by their own leader. “We need the racist thing to seep into public consciousness,” says an ally of the Prime Minister. “But it can’t be us saying it.”

Moderate Tories are beginning to see an opportunity to cleanse their own party of toxic associations if the perception of nasty extremism can be made to cling to Farage. Some MPs admit privately to being glad to see the back of some of the defectors from their local constituency organisations – a view reinforced by the abusive letters and threatening emails they get from the new Ukip recruits. “In a bizarre kind of way they’ve done the Tories a favour in the long run by making us look moderate,” says one Conservative who is defending a marginal seat.

Meanwhile, Labour is finally waking up to the danger that Ukip poses to its own vote:

At the start of the year, senior Labour figures were counting on the result of the European elections to trigger civil strife on the Tory side. Now they are frantically managing down expectations of their own performance, portraying the poll as a false indicator of national allegiances in which the voices of fanatical Eurosceptics will be over-represented – a free hit in which voters will punish all the Westminster parties. (As one strategist puts it: “A f*** you vote in a f*** you election.”)

The threat that the situation poses to [David] Cameron lies in the electoral arithmetic – Ukip can cost him seats. For [Ed] Miliband, it is a problem of momentum – Ukip has stolen his insurgent thunder. The Tories spent too long chasing Ukip’s agenda; Labour spent too long ignoring it. Farage’s bubble will not suddenly burst. More likely, the air will seep out slowly over the coming year, by which time both Cameron’s and Miliband’s prospects of winning a majority may already be blown away.

Robert Webb: Ukip trades in the language of fear and division. The left must not humour its anti-politics crusade

In a guest column, the actor and comedian Robert Webb asks how the left should respond to the challenge of Ukip:

A question many of us have been troubling ourselves with over the past few weeks is: “Exactly what is the correct way to despise Ukip?” Is it just a bunch of bitter old men pining for a Britain that never existed? Or is it a dangerous force of reaction, poisoning the debate about immigration and the EU with parochial anti-politics and straightforward xenophobia? Jokers or jingoists? Fools or fascists? And shouldn’t we be engaging with their policies instead of just calling them names?

Fools or fascists? Ukippers are the kinds of fools who haven’t noticed they’re sleepwalking towards fascism. Many Ukip candidates are of the age when their parents fought in the Second World War. They don’t recognise what they see in their own party literature because they’ve learned not to look too closely. Their business is anti-politics, something they share with those on the left who join in with the chorus: “They’re all the same – they’re just in it for themselves.”

Ukip trades in the language of fear and division; it seeks power in order to reject responsibility. Putting a cross next to a box for Ukip is a pastime for people who like elections but don’t much care for democracy.

Rhiannon Lucy Cosslett: why is our sex education so terrible?

“My one and only sex education lesson at secondary school involved a white-haired deputy head teacher, a jumbo pack of condoms and a large bottle of baby oil . . .” So begins the blogger Rhiannon Lucy Cosslett’s funny, angry and authoritative essay on the state of sex education in Britain today.

She chronicles the battle to have SRE – sex and relationships education – made a compulsory part of the National Curriculum, arguing that it is vital, at a time when parents are so worried about internet pornography, “slut-shaming” and sexting.

It’s hard to predict what the impact on the next generation will be, but as someone who runs a frank blog for young women, The Vagenda, I am hearing, anecdotally at least, that seeing a woman struggle or resist sex constitutes “foreplay” in the minds of some boys and I hear young women expressing anxiety at being expected to mimic certain acts.

One of the lads from InRealLife [Beeban Kidron’s documentary about teenagers], a 14-year-old called Ben, describes how the girls who agree to do such things are immediately labelled “slags”. Film footage or images of young girls stripping or performing sexual acts which were then “sexted” to their boy of choice have in some instances been distributed among the student body – or, worse, used to blackmail the girl into further sexual activity.

In the very worst cases, this leads to suicide. Teenage girls remain the group most at risk of abusive relationships; the National Society for the Prevention of Cruelty to Children found that a third of girls aged 13-17 have experienced physical or sexual violence in relationships. Women’s Aid says 18 per cent of 16-to-18-year-olds are unsure whether slapping counts as domestic violence. And in 2002 the Department of Health said that at least 750,000 children a year were witnessing domestic violence at home. Teaching both genders what a healthy relationship looks like is a matter of some urgency.

So why are politicians so reluctant to tackle the problem?

Rowan Williams on the morality of capitalism

Deprived of most of the resources of intelligent scepticism, irony and perspective, even humility, which in a more functional culture would give us a bit of critical distance on our dreams – and on those who fall over each other in claiming to realise our dreams for us – we are at the mercy of those whose self-interest is served by exploiting our self-interest.

But, in turn, those cunning and resourceful enough to exploit our self-interest also have to be stupid enough not to be distracted from the profitable business of managing our interests by any larger considerations of long-term effects, whether social, environmental or whatever. As Marquand says, “free choice” has become “a self-validating mantra”, from which we can’t escape because we cannot act collectively in a purposeful way. The relation between producer and consumer, now the norm for every imaginable human interaction, locks us in to a devil’s pact of collective foolishness with no long-term outcome except disaster and universal impoverishment.