A large part of science involves communicating what it means to people who aren’t scientists. When new discoveries have important real-world implications – like, for example, that smoking tobacco significantly increases the likelihood of contracting lung cancer – it becomes impossible for scientists not to engage in messy cultural battles, as much as they might not want to.

The issue where this applies more than anything else in the modern world is climate change. Or should that be global warming? A new study has shown that the latter term is more frightening than the former, even though it’s less scientifically-accurate.

Climate change is the term that applies to the broad effects of what we’re doing to the atmosphere and the planet, and includes a range of things like desertification, collapsing Antarctic ice sheets, shifting seasonal averages and acidification of the oceans. Global warming is also correct in the sense that the long-term, overall trend across the planet’s surface is for average temperatures to increase, but it fell out of favour in the scientific community when talking to lay people because it masked that, in the short term, some of the effects would appear to be the opposite. Here in the UK, for example, one of the clearest manifestations of our changing climate is in our winters, which are getting wetter and milder.

The Yale Project on Climate Change Communication conducts regular research into how the American public perceives the reality of climate change, including how well understood the various risks and rewards of certain policy decisions are. As its latest report, “What’s in a name?”, explains:

What do the terms “global warming” and “climate change” mean to the American public? Are they synonyms? Does the public see and use each term equally? Do they interpret and respond to the two terms in the same way? Or do they view and respond to each term differently? When communicators use these two terms, how do different audiences interpret them? Over the years, these questions have generated much debate and controversy in the media and among scientists, educators, political analysts, advocates and citizens.

Its results are fascinating, but also perhaps worrying for those who wish science could be communicated in the most accurate form possible to the public.

Respondents to the survey were split into two groups – each would get the same questions, but one group would have “global warming” used in each one, while the other group got “climate change”. Either of the two groups would constitute a representative sample for a normal national survey, but the results were significantly different dependent upon which term was used.

Here’s the table from the report: 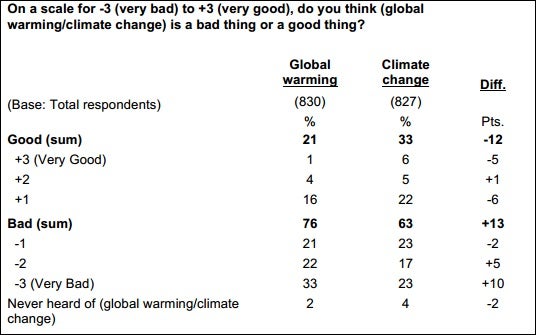 Using “climate change” instead of “global warming” gives a 12-point increase in responses saying it’s a good thing, and an almost identical 13-point decrease for those who consider it a bad thing. That’s a remarkable result considering all that’s changed is two words that are supposed to refer to the same problem.

Regardlesss of demographic group, “global warming” inspired more negative and fearful emotions. Global warming is found to inspire images of ice melting, coastlines flooding, ozone layer damage and “world catastrophe”, and it also increases acceptance that it is both happening and is caused by humans, and posing a threat both to the next generation and the generation after it.

What can we take away from this? The study notes that “global warming” outranks “climate change” as a search term online by a factor of 3:1, and when people were asked which term they’d use in casual conversation “global warming” won out by a factor of 2:1, so it’s clear which term is more colloquial. Yet there are political implications, too, as the study makes clear when it quotes Republican pollster Frank Luntz’s memo to George W Bush about the “environmental communications battle” in the mid-term elections:

Since then, it seems that Republicans have actually switched back to using “global warming” (perhaps because it inspires more negative, protective emotions than climate change) on campaign sites, while Democrats have stuck with “climate change”. Clearly, politicians are well aware of the polling effects of the language that they use. Scientists – who can often be scared or reluctant to be seen to be partisan with regards to their research – may have to become just as canny if they wish to influence public policy and mood.