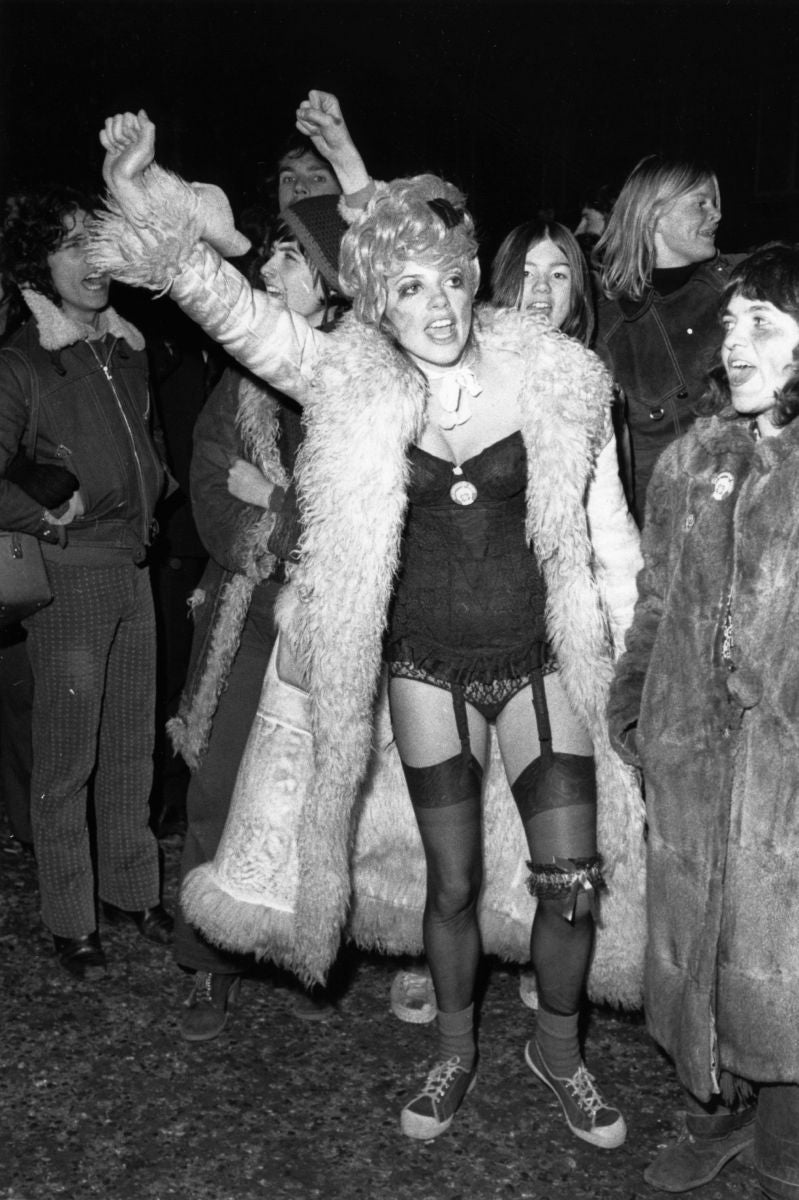 All sex is rape. You should taste your own menstrual blood. E=mc2 is a sexist equation.

As an intellectual movement, Second Wave feminism has suffered more than most by being ground down into soundbites, its leaders flattened into caricatures. It is nothing less than an outrage that so little should remain of, say, Andrea Dworkin’s legacy that her most famous utterance is something that she never actually wrote or argued. Her peers have similarly been crushed by a feminist movement whose primary method of moving forward often seems to be kicking against its foremothers.

If you talk to young feminists now, they often see the Second Wave as a relic of an antiquated age – homophobic, transphobic, anti-sex, concerned with the plight of middle-class white women to the exclusion of everyone else. They are partly right. The Second Wave is generally acknowledged to have begun with Betty Friedan’s 1963 book, The Feminine Mystique, which suggested that American housewives were asking themselves “Is this all?”. Friedan presented herself as one of these housewives, awakened to the feminist movement by her research – an image that was complicated by the later revelation that she had a long history of radical activism. Friedan knew that presenting herself as a political naif was a way to slip her disruptive message past her society’s self-appointed moral guardians. (There is a lesson here for the modern feminist movement: our demand for “authenticity” is still as strong, and still as open to being undermined by inconvenient facts. )

Friedan’s book was hugely influential in shaping the demands of the Second Wave feminists who followed her – the right to work outside the home, and to be paid for it at the same rate as men; the right to reproductive freedom, in the form of abortion and birth control; the demand that motherhood should not be seen as the uncomplicated pinnacle of a woman’s achievement. But even within the Second Wave, other theorists had spotted the problem with what Friedan was asking. As bell hooks writes in 1984’s From Margin to Center:

Friedan’s famous phrase, “the problem that has no name,” often quoted to describe the condition of women in this society, actually referred to the plight of a select group of college-educated, middle- and upper-class, married white women – housewives bored with leisure, with the home, with children, with buying products, who wanted more out of life. Friedan concludes her first chapter by stating: “We can no longer ignore that voice within women that says: ‘I want something more than my husband and my children and my house.'” That “more” she defined as careers.

She did not discuss who would be called in to take care of the children and maintain the home if more women like herself were freed from their house labor and given equal access with white men to the professions. She did not speak of the needs of women without men, without children, without homes. She ignored the existence of all non-white women and poor white women. She did not tell readers whether it was more fulfilling to be a maid, a babysitter, a factory worker, a clerk, or a prostitute than to be a leisure-class housewife.

Some of the sins of the Second Wave, then, are sins of omission – a failure to consider any experience beyond that of the writer herself, or a desire to univeralise from her own background and ambitions. Elsewhere, though, the Second Wave has been left behind by the tide of popular opinion. The end of the Second Wave is generally held to be the “Sex Wars” of the 1980s, particularly the battle over the feminist response to pornography. Today, straightforward anti-porn feminists are rare, and many leading thinkers call instead for an accommodation with the medium. (And of course, the internet has made porn available in a way that neither side in the 1980s could have imagined.)

The sources of other ongoing intra-feminist disputes can also be traced back to the Second Wave. Here, for example, is Germaine Greer in The Whole Woman:

“The only way a man can get rid of healthy genitals is to say that he is convinced that he is a woman. Then another man will remove them and gladly . . . Governments that consist of very few women have hurried to recognise as women men who believe that they are women and have had themselves castrated to prove it, because they see women not as another sex but as a non-sex . . .

There is a witness to the transsexual’s script, a witness who is never consulted. She is the person who built the transsexual’s body of her own flesh and brought it up as her son or daughter, the transsexual’s worst enemy, his/her mother. Whatever else it is, gender reassignment is an exorcism of the mother. When a man decides to spend his life impersonating his mother (like Norman Bates in Psycho) it is as if he murders her and gets away with it, proving at a stroke that there was nothing to her. His intentions are no more honourable than any female impersonator’s; his achievement is to gag all those who would call his bluff. When he forces his way into the few private spaces women may enjoy and shouts down their objections, and bombards the women who will not accept him with threats and hate mail, he does as rapists have always done.”

This is, to put it politely, cod-psychology – and in its comparison of trans women to rapists, a dangerous demonisation of an already stigmatised population. It is questionable whether even Greer herself would agree with what she wrote in The Whole Woman, but there are still radical feminists who dispute whether someone born male can ever be a woman. There is also a broader question: what is gender, anyway? If there is no such thing as a “female brain”, what does it mean to identify as a woman?

In these areas – pornography, transgenderism, race and class – the Second Wave “lost”. But there are plenty of areas in which it won. I’m only writing this because of the advances made by the Second Wave in getting women into the workplace and securing them equal protection under the law.

And by rejecting the Second Wave wholesale – as embarrassing dinosaurs, who we must execute in the relentless quest for the sunlit uplands of True Equality – we are falling into a sexist trap. First, because no great political idea or movement is perfect, and the demand for perfection is often used as a way to keep women in their place; and second, because so much of the criticism of the Second Wave is so relentlessly personal. By this, I mean both the outsider sledging (the idea that Andrea Dworkin was so ugly that she couldn’t possibly have been raped, for example) and the feminist-on-feminist “trashing” described by Jo Freeman in her famous essay of the same name: “This attack is accomplished by making you feel that your very existence is inimical to the Movement and that nothing can change this short of ceasing to exist.”

This week, the New Statesman website will publish a series of essays exploring the ideas of the Second Wave in a way which does justice both to their power and to their nuance. They will expose the bad, and rediscover the good – and place both within the context of the time in which they were written. Each writer has chosen her own subject, so the selection makes no pretence to being comprehensive or even fair. You will probably notice that our Second Wavers are dominated by white middle-class Anglo-American voices (as many black feminists and womanists pointed out at the time).

I’ll update the list here as each new piece is published, and if you’ve written on any of the women we’ve missed, please send me a link (@helenlewis) and I will add you to this page.

Hannah Mudge on Susan Brownmiller’s In Our Time (1999)

PS. You can also read Sanjena Sathian on Gloria Steinem at Ozy; Julie Bindel on Jill Johnston; and we’ve republished Suzanne Moore’s 2004 piece on Valerie Solanas, author of the SCUM manifesto; and Andrea Dworkin’s 2000 account of her rape and her 2003 piece on Kate Millett.

PPS. Perhaps the best marker of the end of the Second Wave is the Anita Hill case (which Bim Adewunmi discusses with Kimberlé Crenshaw here). In its wake, the 22-year-old Rebecca Walker – daughter of Alice – wrote an essay entitled “Becoming the Third Wave“. Its words are just as relevant now:

“I am ready to decide, as my mother decided before me, to devote much of my energy to the history, health, and healing of women. Each of my choices will have to hold to my feminist standard of justice. To be a feminist is to integrate an ideology of equality and female empowerment into the very fiber of my life. It is to search for personal clarity in the midst of systemic destruction, to join in sisterhood with women when often we are divided, to understand power structures with the intention of challenging them. While this may sound simple, it is exactly the kind of stand that many of my peers are unwilling to take.

So I write this as a plea to all women, especially the women of my generation: . . . the fight is far from over. Let this dismissal of a woman’s experience move you to anger. Turn that outrage into political power. Do not vote for them unless they work for us. Do not have sex with them, do not break bread with them, do not nurture them if they don’t prioritise our freedom to control our bodies and our lives. I am not a postfeminism feminist. I am the Third Wave.”