Staffers over at the Guardian could be forgiven for seeing Ukip’s election gains as evidence that Britain is indeed in the middle of a transformation into the rainy fascism island is has always threatened to become – yet the stats behind its pearl-clutching front cover splash today are a bit odd. Based on the latest British Social Attitudes (BSA) survey from think-tank NatCen, the paper leads with this:

The proportion of Britons who admit to being racially prejudiced has risen since the start of the millennium, raising concerns that growing hostility to immigrants and widespread Islamophobia are setting community relations back 20 years.

New data from NatCen’s authoritative British Social Attitudes (BSA) survey, obtained by the Guardian, shows that after years of increasing tolerance, the percentage of people who describe themselves as prejudiced against those of other races has risen overall since 2001.”

NatCen has been running its survey since 1983 (although only annually since 1998), giving us a wealth of information about the British public and its attitudes towards other races, nationalities and sexualities. The nationwide trend in people self-declaring prejudice comes from this graph: 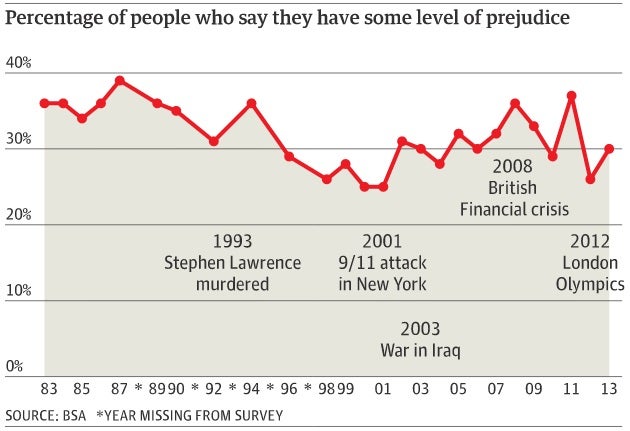 This a chart specifically of self-reported prejudice, with people being asked the following question: “How would you describe yourself … as very prejudiced against people of other races, a little prejudiced, or not prejudiced at all?” Answers of either “very” or “little” are grouped together to give the value used in the above graph. The sample size was 2,149 people, which, given that the most recent ONS estimate for the population of the UK is 63,705,000 for mid-2012, means that we know this survey has a margin of error of (roughly) +/-2 per cent. That’s relatively standard for a national poll.

The Guardian argues that, after a slow but steady fall over the course of the 1980s and 1990s, the story of the last decade (or at least, post-9/11) was an equally-paced reversal, with one exception: the massive drop from 34 per cent to 24 per cent in 2012, which is attributed to the feel-good factor of the Olympics. The rise back to 30 per cent is a reversion to the overall trend.

But the thing is, that graph above is one the Guardian did itself. The graph that’s in the actual report looks like this:

(Thanks to @danbarker for tweeting this).

The purple line is the same as the red line in the Guardian‘s graph – and the light blue line is the five-year average of annual results. An average like this is important for a survey like this, as we’re most interested in the long-term trend and less interested in occassional strange results that might give a misleading impression (like, for example, the Olympics, or 9/11).

It’s immediately obvious that the Guardian is right to say that the trend over the 1980s and 1990s was downwards, and over the 2000s upwards – but it should also be clear that this graph is a lot less alarming than the one without the averages. Not only did self-identifying prejudice peak at a lower level than it started in the 1980s, it looks like it’s started going down again since 2009 or 2010. It makes the headline claim – that “racism is on the rise in Britain” – misleading, going by the BSA survey.

The survey is still interesting and useful, though, because it includes breakdowns of regional and demographic attitudes between 2014 and 2001. London has scored lower for levels of prejudice, while there is a clear trend where increased distance from the capital correlates with larger increases in prejudice score (Scotland and Wales having had double-digit increases). Men are more prejudiced than women; manual labourers and semi-skilled service workers have become more prejudiced since 1991, while white collar professionals have become less so. There’s much here that chimes with analysis of Ukip’s rise as being driven by the disenchantment of groups that feel they’ve been left behind by “metropolitan elites”.

But perhaps the most interesting question should be: what does it mean to consider oneself “prejudiced”? We don’t know if the numbers of people considering themselves “very” prejudiced has decreased while “a little” prejudiced has increased the same amount. It’s also worth asking if the meaning of the word prejudice, and the word racism, has changed over the last 30 years. Racism is much more complicated, and manifests in many, many institutional ways, that aren’t reflected in the BSA survey.